(RNS) — Sixty years after she stepped into the jungle to observe chimpanzees in their natural habitat, Jane Goodall, the world-renowned primatologist and conservationist, has won the 2021 Templeton Prize.

Goodall, 87, is only the fourth woman to win the award, established by the late investor and philanthropist Sir John Templeton to honor those who use science to explore humankind’s place and purpose within the universe. She follows Francis Collins, director of the National Institutes of Health, who won the $1.5 million prize last year for leading the Human Genome Project to its completion.

Besides her scientific achievements studying chimpanzees, Goodall has become a champion of conservation and an advocate for the ethical treatment of animals. Through two nonprofits she has founded, she travels the world empowering young people to start projects to improve the lives of humans, animals and the environment.

“Her discoveries have profoundly altered the world’s view of animal intelligence and enriched our understanding of humanity in a way that is both humbling and exalting,” said Heather Templeton Dill, president of the John Templeton Foundation and the granddaughter of its founder. “Ultimately, her work exemplifies the kind of humility, spiritual curiosity, and discovery that my grandfather, John Templeton, wrote and spoke about during his life.”

As a girl, Goodall, who grew up in England, fell in love with the natural world and with animals in particular. At 26, and without a college degree yet, she entered the Gombe National Forest in Tanzania and began training an empathic eye on the life and ecosystem of the chimpanzee, humans’ closest living relative.

She was the first to observe chimpanzees could use tools, which were previously believed to be exclusive to humans. She also showed they have individual personalities and are capable of creating long-term bonds.

She later returned to England and earned a doctorate from Cambridge.

Her conviction that humans are part of nature, not separate from it, led her to develop her own unique cosmology. She has said she believes in a higher power, what she has called a divine intelligence.

Religion News Service talked to Goodall on Zoom ahead of the Templeton announcement. Goodall sat in the attic of her childhood home surrounded by a bookcase featuring a framed photo of David Greybeard, the first chimpanzee who trusted her and allowed her to come close enough to observe him, as well a photo of her mother, Margaret, who encouraged and assisted her on her travels to Africa.

What was your religious upbringing like and where did it take you?

My grandfather was a Congregationalist minister. We have the Congregational church in Bournemouth that is very open-minded and very inclusive. We weren’t a particularly religious family. We went to church sometimes. But when I was 16, I fell passionately and platonically in love with the minister of the church, who was Welsh. Religion entered into me. It felt like I had a secret understanding of something other people perhaps didn’t share. But I had no compulsion to share it. 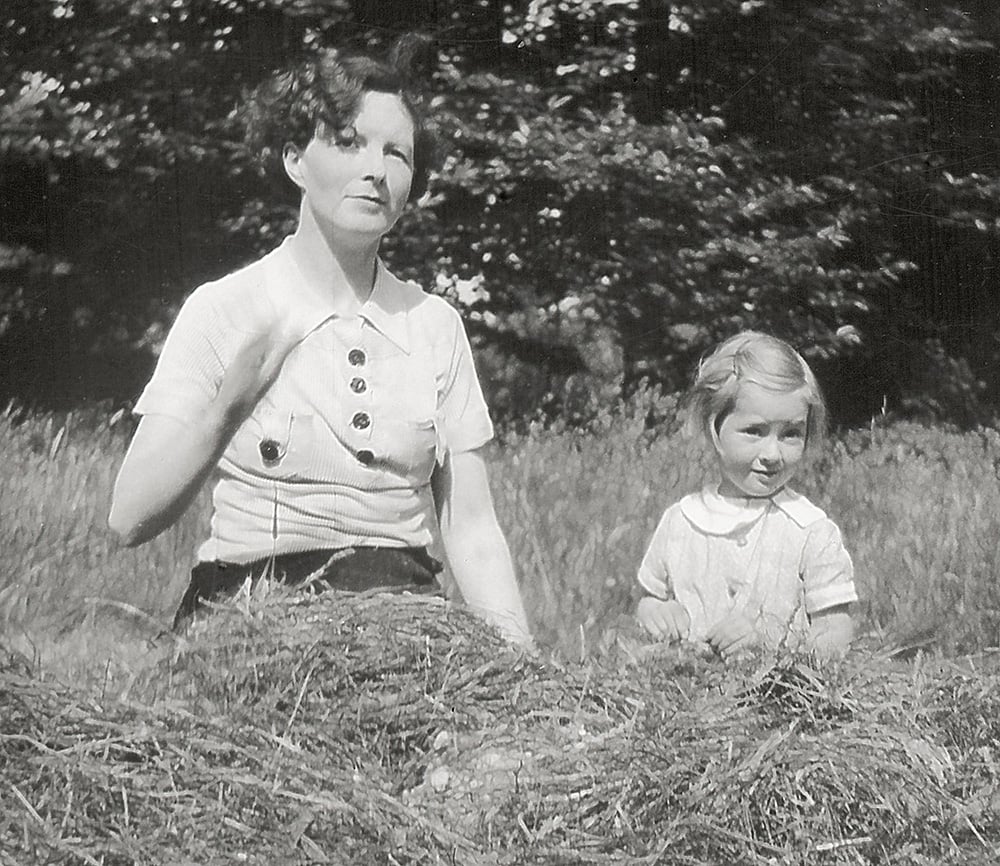 Young Jane Goodall with her mother, Margaret Goodall. (JGI/Courtesy of the Goodall Family)

I do remember the first place I set foot on African soil was Cape Town. It was beautiful and exciting until I saw on the back of every seat and at the door to every restaurant it said, “White people only.” I wasn’t brought up to judge people by the color of their skin, their religion or anything else. So I was pleased to leave Cape Town.

After I’d begun to succeed with the chimps, that’s when I had time to pause and that’s when I developed a really strong feeling of spiritual connection with the natural world.

What I love today is how science and religion are coming together and more minds are seeing purpose behind the universe and intelligence. Einstein did. And my good friend Francis Collins.

You said once that you never set out to be a scientist. What did you want to be?

A naturalist who lived with animals and observed them and wrote books about them. When I was growing up, women weren’t that kind of scientist at all. There weren’t really any men living out in the field with animals. Not the way I wanted to.

Where did you get that image of the naturalist?

Reading “Doctor Dolittle” books, “Tarzan of the Apes” (by American writer Edgar Rice Burroughs). We didn’t have films in those days.

How did you figure out what you needed to study out there in the jungle as a young woman?

That was easy. All my life I watched animals: squirrels and birds and insects out in the garden here. In Bournemouth, you’ve got cliffs above the sea. They’re pretty wild — so you could just get away from people out in nature. I learned patience, waiting, watching, slowly knowing the animals would lose their fear of you.

(In Africa) I wrote in my journal way into the night. It started out with notebooks and a pencil and paraffin lamp. We couldn’t even afford a typewriter. I was always accompanied by a toad who came around to get the flies who came to the light.

When you went to college, did those practices serve you well?

Well, when I got to university I was told I’d done everything wrong. I shouldn’t have given the chimps names; it was scientific to number them. I couldn’t talk about them having personalities, minds and emotions. Those were unique to us. I was actually taught in the early 1960s, that the difference between us and animals was one of kind. We were elevated onto a pinnacle, separate from all the others. But my dog as a child had already taught me that wasn’t true. You can’t share your life in a meaningful way with a dog, a cat, a guinea pig, a rabbit, a horse, a bird, a pig and not know that, of course, we’re not the only beings with personalities, minds and emotions.

I was also told by these same professors that to be a good scientist you have to be objective. Therefore you cannot have empathy with what you’re studying. That is so wrong. It’s having empathy with what you’re studying that gives you those “aha” moments — “Yes, I think I know why he or she is doing that.” Then you can put on the scientific hat, which I learned at Cambridge, which I love, and say, “Let me prove that my intuition is right or not.” You’ve said you don’t want to explain life entirely through science, which is an odd thing to say as a scientist. What do you mean?

I don’t think we can. We’ve got finite minds. And the universe is infinite. When science says, “We’ve got it all worked out — there’s the Big Bang that created the universe.” Well, what created the Big Bang? Our minds can’t do it. What’s fascinating me now is the news being uncovered about these unidentified flying objects the Navy has been recording all these years. It’s really exciting.

What advice would you give to a 10-year-old wanting to become a scientist?

I would tell them you mustn’t be cold. You must have empathy. It’s the lack of empathy for subjects that’s led to so much cruelty to animals. Now, we’re even learning how these trees communicate. It’s such a fascinating world to live in. There’s always something new to learn.

The Templeton Foundation is interested in ways of reconciling science and religion. Is that something you believe in?

I think it’s happening. When more scientists are saying there’s an intelligence behind the universe, that’s basically what the Templeton Foundation is about: We don’t live in only a materialistic world. Francis Collins drove home that in every single cell in your body there’s a code of several billion instructions. Could that be chance? No. There’s no actual reason why things should be the way they are, and chance mutations couldn’t possibly lead to the complexity of life on earth. This blurring between science and religion is happening more and more. Scientists are more willing to talk about it.

Do you have any practices that ground you and allow you to open up to the spiritual realm?

Well, nature of course. Trees. Here I’m lucky. We have a lovely garden and every day I spend half an hour under my favorite tree that I used to climb as a child. I’m joined by a robin and blackbird. The robin today actually perched on my knee. It’s the same thing as how I got used to the chimps. Being in the same place, not moving too fast, not frightening them.