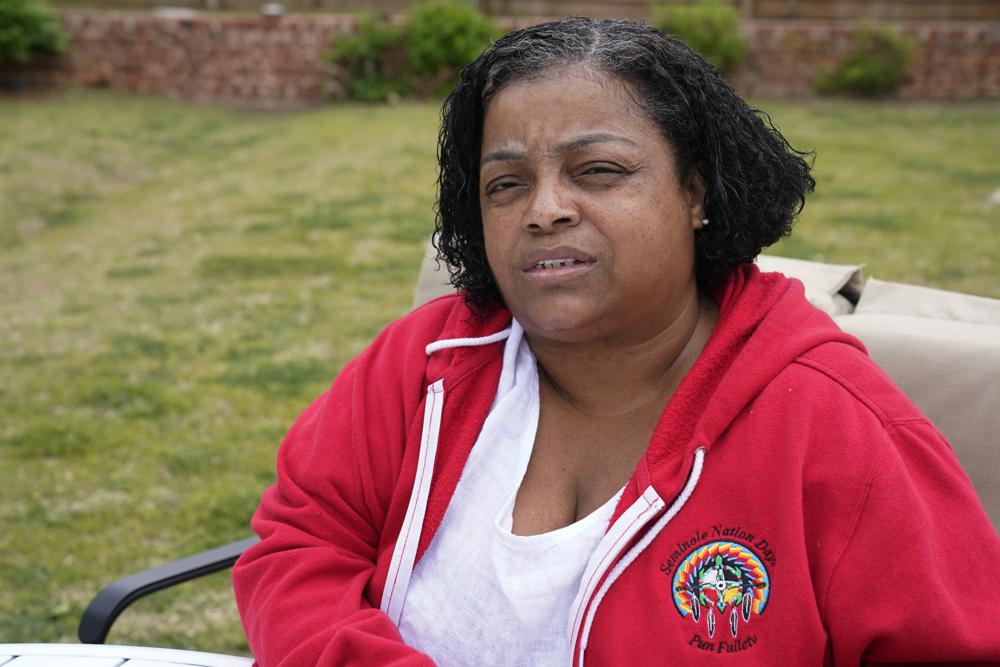 OKLAHOMA CITY (AP) — As the U.S. faces a reckoning over its history of racism, some Native American tribal nations that once owned slaves also are grappling with their own mistreatment of Black people.

When Native American tribes were forced from their ancestral homelands in the southeastern United States to what is now Oklahoma in the 1800s — known as the Trail of Tears — thousands of Black slaves owned by tribal members also were removed and forced to provide manual labor along the way. Once in Oklahoma, slaves often toiled on plantation-style farms or were servants in tribal members’ homes.

Nearly 200 years later, many of the thousands of descendants of those Black slaves, known as Freedmen, are still fighting to be recognized by the tribes that once owned their ancestors. The fight has continued since the killing of George Floyd last year by a Minneapolis police officer spurred a reexamination of the vestiges of slavery in the U.S.

The Cherokee, Chickasaw, Choctaw, Muscogee (Creek) and Seminole nations were referred to historically as the Five Civilized Tribes, or Five Tribes, by European settlers because they often assimilated into the settlers’ culture, adopting their style of dress and religion, and even owning slaves. Each tribe also has a unique history with Freedmen, whose rights were ultimately spelled out in separate treaties with the U.S.

Today, the Cherokee Nation is the only tribe that fully recognizes the Freedmen as full citizens, a decision that came in 2017 following years of legal wrangling.

“I think that we are a better tribe for having not only embraced the federal court decision but embraced the concept of equality,” said Cherokee Nation Chief Chuck Hoskin Jr., a longtime supporter of citizenship rights for the Freedmen.

The Cherokee Nation, among the largest Native American tribes, has about 5,800 Freedmen citizens who have traced an ancestor on the tribe’s original Freedmen rolls in the late 19th century.

When the federal government sought to break up tribal reservations into individual allotments after the Civil War, they created two separate tribal rolls — one for members with American Indian blood and one for Freedmen. In many cases, tribal citizens who appeared Black were placed on the Freedmen rolls, even if they had blood ties to the tribe.

Of the Five Tribes, only the Chickasaw Nation never agreed to adopt the Freedmen as citizens, according to the Oklahoma Historical Society.

LeEtta Osborne-Sampson, a Seminole Freedman who has a tribal identification card and serves on the tribe’s governing council, said she sought a vaccine in February at a clinic operated by the Indian Health Service, an agency within the U.S. Department of Health and Human Services. She said a worker told her the Seminole Nation doesn’t recognize Freedmen for health services. When she asked for additional explanation, the worker called over a tribal police officer, she said.

“So, I left,” said Osborne-Sampson. “Even the worst person would try to help when there’s a pandemic all over the world, but they don’t care about the Freedmen. I feel like they want us to die.”

Three other Seminole Freedmen shared similar experiences with The Associated Press about the same clinic.

The Seminole Nation says the decision about whether to provide vaccines to Seminole Freedmen rests with the IHS, not the tribe.

“To be clear, the Seminole Nation does not operate the Wewoka Indian Health Services clinic, has absolutely no policy oversight and was in no way involved with administering COVID-19 vaccines,” Seminole Nation Chief Greg Chilcoat said in a statement.

The agency said in a statement that it was reviewing eligibility of Seminole Freedmen and will be working with the tribe to determine what services IHS will provide.

Seminole Freedmen say they are unable to receive services other tribal citizens get, including health care, tribal license plates and housing subsidies. The Seminole Freedmen have been fighting for years to be recognized as full tribal citizens in legal battles that underscore the systemic racism that Freedmen from all Oklahoma-based tribes say they have experienced from tribal governments and their members.

Many Seminole Freedmen are descendants of freed Black slaves who joined the Seminoles in Florida during their wars against the U.S. government.

“We fought in three wars with them to get where we’re at, and now they’ve turned against us,” said Anthony Conley, who also said he was denied a vaccine at the clinic.

Conley said he believes racism and an unwillingness of tribal citizens to share tribal funds is at the core of the tribe’s decision to exclude Freedmen from full citizenship, a claim that Chilcoat disputes.

The Muscogee (Creek) and Choctaw nations have cited tribal sovereignty as reasons for their opposition to citizenship for Freedmen. When Democratic U.S. Rep. Maxine Waters of California last year attempted to force the tribes to reconcile the Freedmen issue by inserting language into a housing bill, Choctaw Nation Chief Gary Batton said the U.S. government is responsible for the Freedmen’s plight, not the Choctaw Nation.

“There is no more fundamental element of tribal self-governance than the authority of a Tribe like the Choctaw Nation to determine our own citizenship,” Batton wrote in a letter to House Speaker Nancy Pelosi.

Ultimately, it might be a decision for the federal courts to make. Osborne-Sampson said she and other Freedmen are consulting with an attorney on how to proceed.