Daniel Whyte III Says, After Watching the Tragic and Sad but Honest ’60 Minutes’ Piece on Transgenderism in America, the More Convinced I Am That the Evangelical Church Has Failed America and Prominent Evangelicals Need to Admit That and All Pastors Ought to Apologize to Their Communities for Failing Them by Not Praying for Them and Witnessing to Them. The Church in America Is Responsible for Not Praying for These People and Not Reaching Them With the Gospel. The Part in This Piece That Deals With People Who Want to Get Out of Transgenderism and Go Back to Normal Will Break Your Heart

CBS is standing by a recent episode of 60 Minutes which highlighted the stories of transgender teens who say they were rushed to transition and now regret it – amid complaints from furious LGBTQ activists who say it shouldn’t have aired.

The episode featured ‘de-transitioners’, people who had started taking hormones to change their gender within a few months of identifying as trans. All of them said they’d learned about becoming trans on the internet.

Lesley Stahl, the veteran CBS journalist who led the episode, laid out how the teens can be easily taken advantage of by greedy doctors who are eager to perform reassignment surgeries and how they might have been influenced by the liberal-left tech industry, which is constantly pushing the issue on today’s youth.

After the episode aired, she appeared in a bonus segment called 60 Minutes Overtime, where Stahl defended her report. She also took heat from a trans-rights lawyer who claimed her story could ‘stigmatize’ and ‘further marginalize’ suicidal trans youth if it was taken out of context.

Stahl also heard from doctors and psychologists who said they were concerned about the number of surgeons ‘popping up’ offering to perform gender reassignment surgery to meet demand, without anyone checking their credentials. They said they were scared to speak up for fear of looking like they don’t support trans rights.

Stahl said that after weighing it all up, it was a story worth telling and others, like Fox News host Tucker Carlson, agreed, saying it highlighted a seldom talked-about issue. 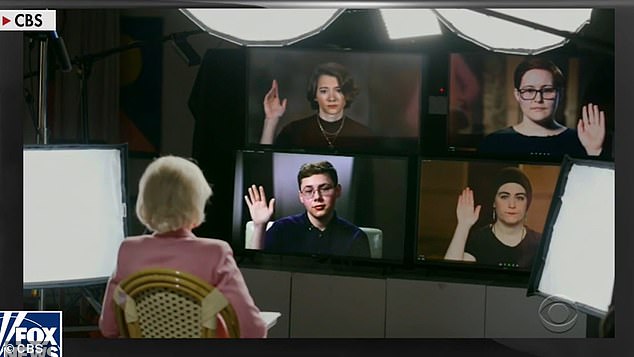 But GLAAD claimed the episode fearmongered young people. They slammed it as ‘shameful’.

‘Tonight @60Minutes @LesleyRStahl aired a shameful segment fearmongering about trans youth. Parents of trans youth could walk away with the false belief that young people are being rushed into medical transition. That is simply untrue, the organization tweeted.

The people Stahl interviewed said just that: that they had been rushed into it, and now regretted it.

Garrett, a young man from Louisiana, was castrated after just three months of taking female hormones.

‘I didn’t get enough pushback on transitioning. I went for two appointments and after the second one, I had my letter to go get on cross-sex hormones,’ Garrett said.

He said he became suicidal after starting the process and not before, as some of Stahl’s critics have claimed.

‘I had never really been suicidal before until I had my breast augmentation. ‘And about a week afterward, I wanted to actually kill myself. I had a plan and I was gonna do it but I just kept thinking about my family to stop myself.

‘It kind of felt like: how am I ever going to feel normal again, like other guys now?’

Lindinisky-Smith told Stahl in another clip: ‘We only did a few sessions. They asked me, ‘So, why do you wanna go on testosterone?’

‘And I said, “Well, being a woman just isn’t working for me anymore.”

She said she then underwent surgery, but immediately felt wrong.

‘I started to have a really disturbing sense that like a part of my body was missing, almost a ghost limb feeling about being like, there’s something that should be there,’ she said.

‘And the feeling really surprised me but it was really hard to deny.’

Lindinisky-Smith said she had been searching the internet, feeling depressed, in her early 20s when she came across transgender online communities.

‘And when I saw them being so happy and excited about doing this wonderful, transformative process to really, like, become their true selves I was like, have I considered that this could be my situation, too?

‘I just had this sense that if – if I could inhabit life as, like, a trans man, as a man, then I wouldn’t feel so self-conscious. I was thinking that it would make me feel very free.’

She said she found a therapist on the internet but ‘she didn’t go – really go into what my gender dysphoria might’ve been stemming from. We only did a few sessions.’

She found a clinic and was given hormone injections within months, she said.

‘They asked me, “So, why do you wanna go on testosterone?” And I said, “Well, being a woman just isn’t working for me anymore.” And they said, “Okay.”‘

Four months after starting testosterone treatments, she got a double mastectomy but she soon afterwards began feeling like part of her was ‘missing’.

‘I started to have a really disturbing sense that like a part of my body was missing, almost a ghost limb feeling about being like, there’s something that should be there.

‘And the feeling really surprised me but it was really hard to deny.’

She stopped taking the hormones and started living as a woman again, after complaining to the clinic.

‘I can’t believe that I transitioned and de-transitioned, including hormones and surgery, in the course of, like, less than one year. It’s completely crazy,’ she said.

Dr. Erica Anderson, a gender psychologist who is trans herself, told Stahl there were a growing number of doctors who are essentially jumping on the band wagon of performing gender reassignment surgery to because there is a growing market and it’s trendy.

‘There are health care providers who have jumped into this area because trans people are interesting. You know, they’re unicorns. You know, “Oh, I have one of them now.” ‘And I think it’s deplorable,’ she said.

The standard for a formal diagnosis of gender dysphoria is that a person has been feeling that they want to transgender for at least six months.

Anderson said that she did not think it was long enough. She treats patients who have taken four years before transitioning.

‘I’m not satisfied with six months myself.

Dr. Laura Edwards-Leeper, a psychologist, told Stahl she was ‘deeply’ concerned about what was going on but was afraid to speak out about it for fear of being accused of transphobia.

‘It greatly concerns me where the field has been going. I feel like what is happening is unethical and irresponsible in some places.

‘Everyone is very scared to speak up because we’re afraid of not being seen as being affirming or being supportive of these young people or doing something to hurt the trans community. But even some of the providers are trans themselves and share these concerns,’ she said.