And in the middle of it all, Danny Kopp sent his boys out to play soccer.

Numbers were down at the Jerusalem neighborhood park frequented by Jew and Arab alike, but his 13-, 10-, and 8-year-old sons still translated between the sides.

“These encounters, as small as they are, remind belligerents that coexistence is still viable,” said the chairman of the Evangelical Alliance in Israel.

But it is easy to do, if attached to a favored narrative.

Since the outbreak of fighting on May 10, Israeli bombs have leveled almost 450 buildings in Gaza, including six hospitals, nine health centers, and the headquarters of the Associated Press. Hamas authorities count 232 dead, including 39 women and 65 children. More than 1,900 people have been injured, and 52,000 displaced from their homes.

But 160 of these have been militant fighters, said Israeli authorities. Hamas’s indiscriminate barrage has launched about 4,000 rockets and killed 12 people—including two children—and injured hundreds. Israel’s Iron Dome defense system has intercepted most rockets, but Iranian sponsorship of Hamas has led to a dramatic increase in long-range missiles able to target Jerusalem.

Such missiles represent 17 percent of the thousands fired this month. Nine years ago, only 1 percent.

The weapons evolve, though the animosity is familiar. 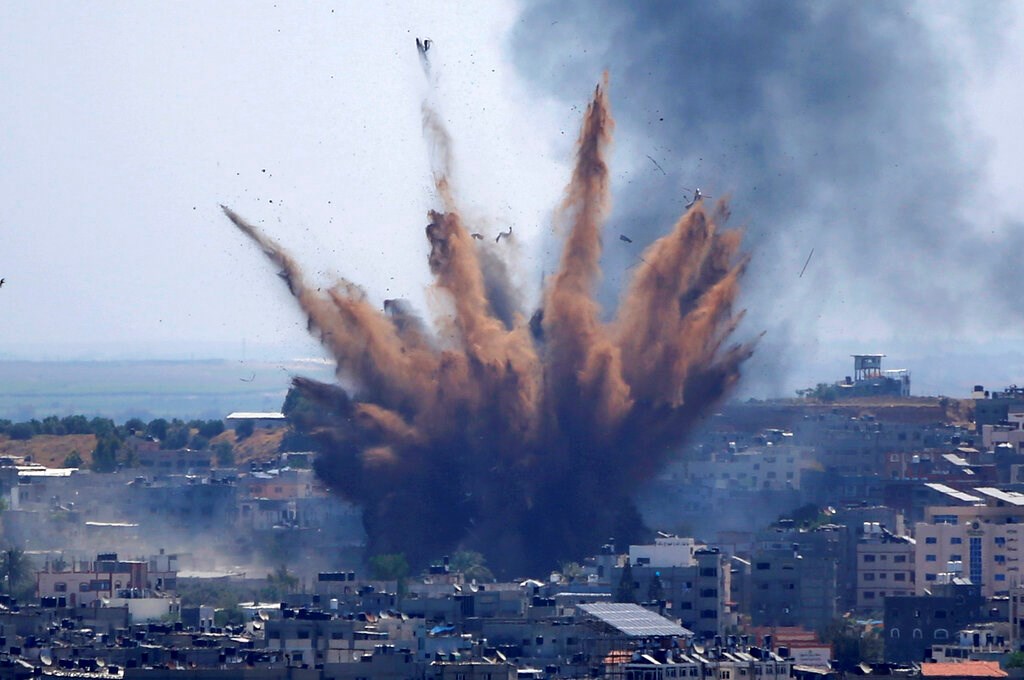 Smoke rises following Israeli airstrikes on a building in Gaza City on May 13, 2021.

But what has shocked and saddened the nearly a dozen sources interviewed by CT—half Jewish and half Palestinian—was the ethnic violence that has torn through previously peaceful towns of coexistence. In Lod, Haifa, Nazareth, and elsewhere, Arab rioters have set 10 synagogues and more than 100 Jewish homes on fire, while looting or damaging hundreds more.

Israel called up 7,000 reservists to quell the violence. But reports say police have been far more lenient with Jewish settlers who have responded in kind, though with less damage. Video recordings, however, depict settler attempts to seize Arab Israeli properties.

The outbreak of violence is tied to Israeli legal proceedings to evict Palestinians from their homes in the East Jerusalem neighborhood of Sheikh Jarrah. The families have been resident there for generations, and the land dispute has alternate explanations. Protests were met with violence, which then spread to the al-Aqsa Mosque. Hamas fired rockets in solidarity.

And amid the backdrop of this quagmire, Kopp sent out his children.

On Saturday, he preached the same message to his mixed Jewish-Arab Narkis Street Congregation in Jerusalem, asking his flock to purposefully hear both sides.

“Jesus constantly broke out of his information bubble,” he said, “engaging every kind of person imaginable, and on a consistent basis.”

Across the separation wall, however, Munther Isaac’s Sunday sermon had a different tone.

This includes antisemitism, Isaac told CT. Yet he also highlighted the 2020 Jerusalem Declaration, created by Jewish scholars to clarify when criticism of Israel or Zionism crosses the line while specifying that criticism in itself is not antisemitism.

But his focus was on “occupation” and “ethnic cleansing”—and “apartheid.” B’Tselem, a leading Israeli human rights organization, recently published that the state’s effective control of the West Bank and Gaza makes the controversial term appropriate.

Isaac then asked Palestinian Christians to act appropriately: with nonviolent resistance. And he asked believers in the West to likewise act: with vocal advocacy.

“Christ died a victim of raging violence and religious extremism,” he preached. “But because we believe in the resurrection, the last word is justice.”

“The Palestinian church response has been largely in line with our society’s polarized state,” said the Philos Project fellow. “One-sided narratives only inflame people’s anger.”

Born and raised in the Gaza Strip, Sayegh acknowledges the appropriate call for justice. But it is simultaneously necessary for each group to reach out to the other.

Israel and Hamas will eventually reach a ceasefire. But given the ethnic strife, popular wounds now run deeper than before.

“If we are not comforting each other while suffering,” Sayegh said, “we won’t be any closer to a solution when the situation begins to improve.”