‘Well, I can speak to the president’s view,’ Psaki said when asked specifically about Waters’ remarks. ‘He has been very clear that he recognizes the issue of police violence against people of color, communities of color is one of great anguish and it’s exhausting and quite emotional at times.’

House Speaker Nancy Pelosi told Capitol Hill reporters Monday that Waters didn’t need to apologize as her comments didn’t incite violence, despite calls from Republicans to have Waters punished for her remarks.

Waters made her initial comments Saturday evening while demonstrating in Minneapolis, where the trial over George Floyd’s death is taking place, and where BLM activists are also responding to the police shooting of Daunte Wright.

Psaki reminded reporters that Biden had met with Floyd’s family shortly after the Minneapolis black man’s Memorial Day death at the hands of Chauvin, a white police officer.

‘And is committed to undoing this long-standing, systemic problem,’ she said.

‘His view is also that exercising First Amendment rights and protesting injustice is the most American thing that anyone can do, but as he also always says, protests must be peaceful that’s what he continues to call for and what he continues to believe it the right approach for responding,’ Psaki added.

In the past, Psaki has linked rhetoric to violence, chiding former President Donald Trump for using terms like ‘China virus’ and ‘Kung flu’ as hate crimes against Asians in the United States have increased.

‘I think there’s no question that some of the damaging rhetoric that we saw during the prior administration, blaming – calling COVID, you know, the ‘Wuhan virus’ or other things led to, you know, perceptions of the Asian American community that are inaccurate, unfair that have … elevated threats against Asian Americans, and we’re seeing that around the country,’ Psaki said at a White House briefing last month, on the heels of the shootings at spas in Atlanta, Georgia, where the majority of victims were Asian women.

Speaking to the Grio on Monday, Waters defended her comments saying, ‘I am nonviolent.’

‘Republicans will jump on any word, any line and try to make it fit their message and their cause for denouncing us and denying us, basically calling us violent,’ Waters continued.

‘Any time they see an opportunity to seize on a word, so they do it and they send a message to the white supremacists, the KKK, the OAth Keepers, the [Proud] Boys and all of that,’ she said.

She also accused Republicans of using the tactic to raise money off the Democrats’ backs.

Walters said she was ‘not worried that they’re going to continue to distort what I say.’

‘This is who they are and this is how they act,’ she added. ‘And I’m not going to be bulled by them.’

On Sunday, House Minority Leader Kevin McCarthy threatened to bring ‘action’ against Waters after she joined protesters in Minnesota on Saturday night.

The House Republican leader warned he would do so if Speaker Nancy Pelosi did not.

‘Maxine Waters is inciting violence in Minneapolis — just as she has incited it in the past. If Speaker Pelosi doesn’t act against this dangerous rhetoric, I will bring action this week,’ he wrote on Twitter.

Pelosi told Capitol Hill reporters on Monday that Waters didn’t need to apologize for her comments.

‘No, Maxine talked about confrontation in the manner of the Civil Rights movement,’ Pelosi said.  ‘I myself think we should take our lead from the George Floyd family. They’ve handled this with great dignity.’

‘No, I don’t think she should apologize,’ Pelosi added.

McCarthy can propose a resolution to try censure Waters or remove her from her committee assignments but, given Democratic control of the House, it will go nowhere if Democrats stick together.

Sen. Ted Cruz and controversial Rep. Marjorie Taylor Greene also criticized Waters, who, over the weekend, joined demonstrations over the police shooting of Daunte Wright, a black 20-year-old shot and killed at a traffic stop by a white police officer, Kimberly Potter.

But many of these Republicans accusing Waters of inciting violence did not make the same charge against then-President Donald Trump in the wake of the January 6th MAGA riot on Capitol Hill, that left five dead and trail of destruction throughout the Capitol.

Cruz and Greene were some of Trump’s most ardent defenders. McCarthy did take to the House floor to declare Trump, who riled up the crowd with his false claims the election was stolen, ‘bears responsibility’ for the attack on Congress. McCarthy later flew to Mar-a-Lago to make peace with the former president after Trump became furious at him for his words.

Republicans have turned Waters into a punching bag before – notably for her urging the public to harass Trump White House staffers when they saw them in public.

Waters traveled to Minneapolis the weekend before closing arguments in the trial of Derek Chauvin, charged with murdering George Floyd on May 25.

The city is bracing for the verdict in the Chauvin case. More than 3,000 members of the National Guard are in Minneapolis, in addition to 1,100 officers from public safety agencies across the state as part of what has been termed Operation Safety Net.

In the early hours of Sunday, two members of the National Guard were injured – although not seriously – in a drive-by shooting.

‘I am not happy that we have talked about police reform for so long,’ Waters said, demanding a guilty verdict in the Chauvin trial and adding: ‘If we don’t [get it], we cannot go away. We’ve got to stay on the street.’

She added that protesters needed ‘get more active, more confrontational’ and they should ignore the curfew in place.

Hours after Waters’ passionate speech, a Minnesota National Guard and Minneapolis police team were fired upon in a drive-by shooting.

The team was providing neighborhood security in Minneapolis when, at about 4.19am local time, a light colored SUV drove by and blasted shots at an occupied National Guard vehicle.

No team members were seriously injured, though two National Guard members suffered minor injuries: One was injured by shattered glass and taken to a local hospital, while the other suffered only superficial injuries.

Cruz accused Waters and fellow Democrats of seeking to ‘to tear us apart.’

‘Why is Maxine Waters traveling to a different state trying to incite a riot? What good can come from this?’ asked Lauren Boebert, representative for Colorado.

Fellow Colorado representative Ken Buck said: ‘Why is a sitting member of Congress encouraging protesters to get “confrontational?”’ 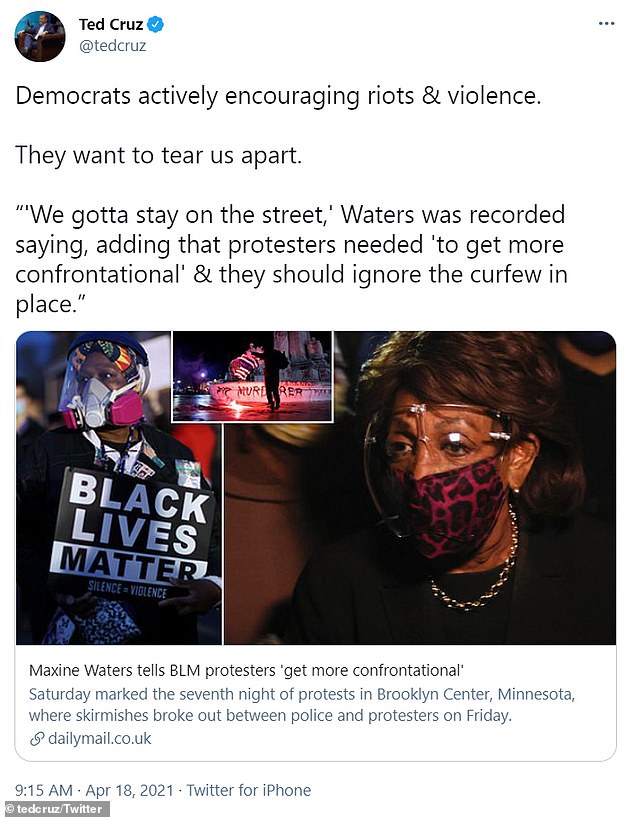 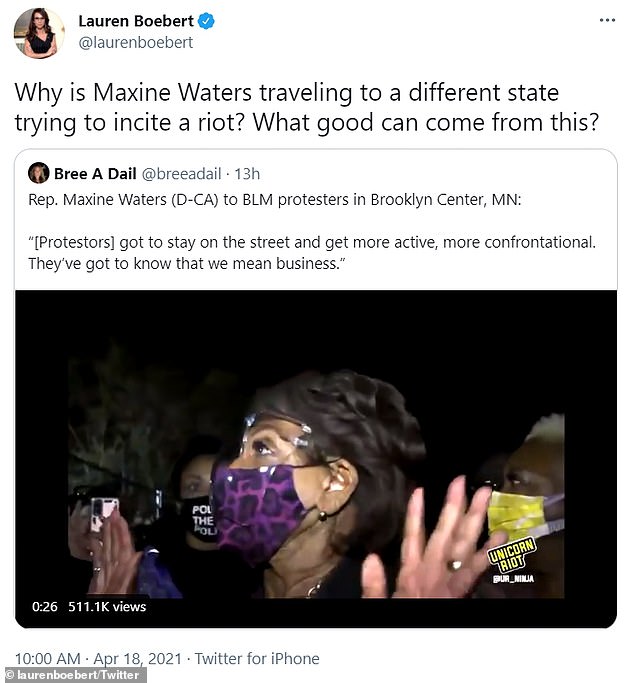 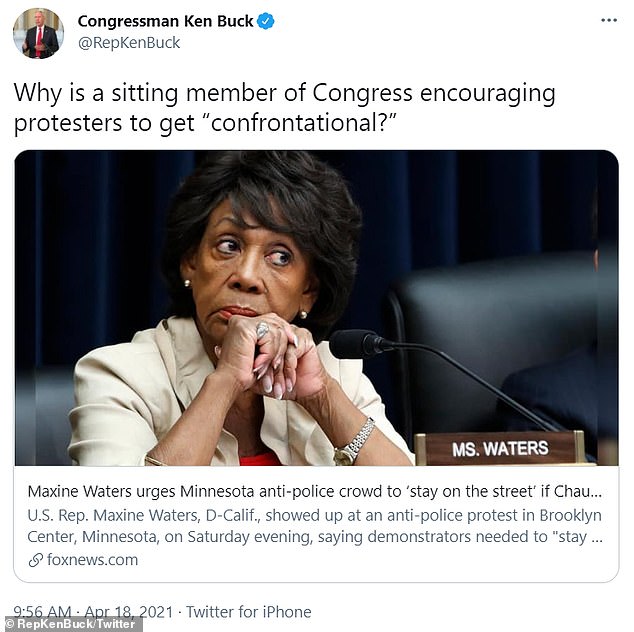 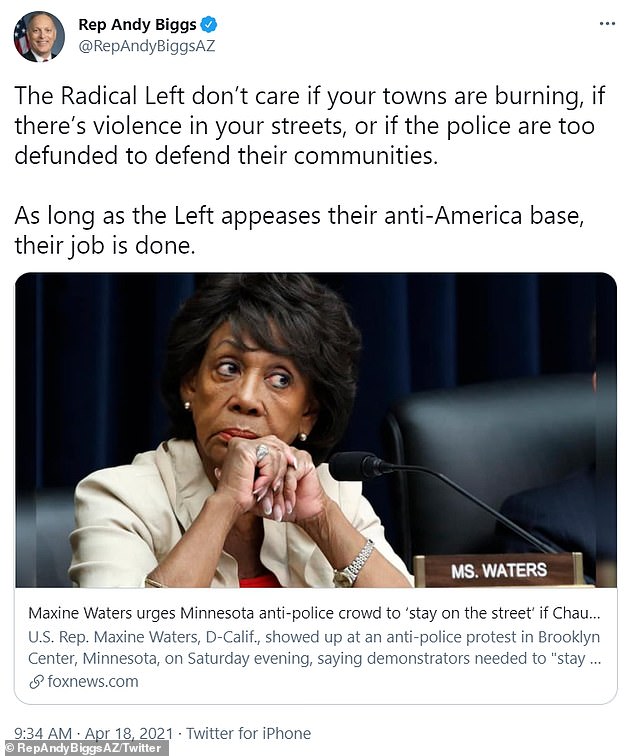 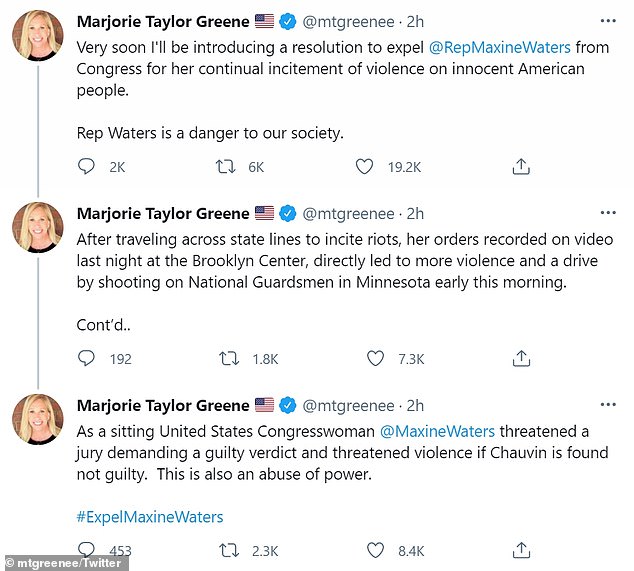 Arizona Republican Andy Biggs added: ‘The Radical Left don’t care if your towns are burning, if there’s violence in your streets, or if the police are too defunded to defend their communities.

‘As long as the Left appeases their anti-America base, their job is done.’

And Marjorie Taylor Greene, congresswoman for Georgia, called for her to be expelled from Congress.

‘As a sitting United States Congresswoman @MaxineWaters threatened a jury demanding a guilty verdict and threatened violence if Chauvin is found not guilty. This is also an abuse of power. #ExpelMaxineWaters’

She called Waters ‘a danger to our society.’

On Twitter, others joined in the outrage at Waters’ remarks.

‘Of course she’ll get away with saying that while anyone else would’ve been thrown in jail,’ Rick Santella tweeted.

Another user tweeted, ‘Good grief lady, leave get out of here.’

One person also accused Waters of ‘stirring people up again with her calls for violence.’

Waters is planning on staying in town until Monday.

According to CBS Minnesota, officials stated that there was a brief altercation between reporters and protesters as Waters was leaving on Saturday, the first reports of any skirmishes.

The protesters stood outside of Orput’s home before marching through is neighborhood in Stillwater.

Protests have also been taking place in Chicago following the death of 13-year-old Adam Toledo, as well as New York City and across the rest of the United States.

On Friday night, many protests across the nation started off peacefully before sporadic clashes broke out between Black Lives Matters protesters and the police.

University of Minnesota medical students and doctors also marched on the Brooklyn Center Police Department on Saturday, a day after it was the site of most of the night’s unrest.

Peaceful protests on Friday devolved into clashes between protesters and police, with flash bangs and pepper spray utilized by the cops.

There originally was not expected to be a curfew for the first time in several days, before one was suddenly imposed during the night’s demonstrations.

Media members were briefly detained and 136 people were arrested.

A temporary restraining order was filed to prevent police from arresting or harming journalists.

‘Following feedback from media, and in light of a recent temporary restraining order (TRO) filed in federal court, MSP will not photograph journalists or their credentials,’ the Minnesota State Patrol said in a statement.

According to the Washington Post, several protesters were arrested on Saturday night. It’s unclear why they were arrested, as the protest of about a hundred was drawing to a close.

Earlier in the day, there were peaceful protests across the nation, including Columbus, Ohio, and Philadelphia.

According to NBC Philadelphia, crowds in that city walked through City Center towards City Hall peacefully in a protest that lasted around five hours.

Nevertheless, some businesses did board up and 1,000 National Guard troops were preemptively deployed.