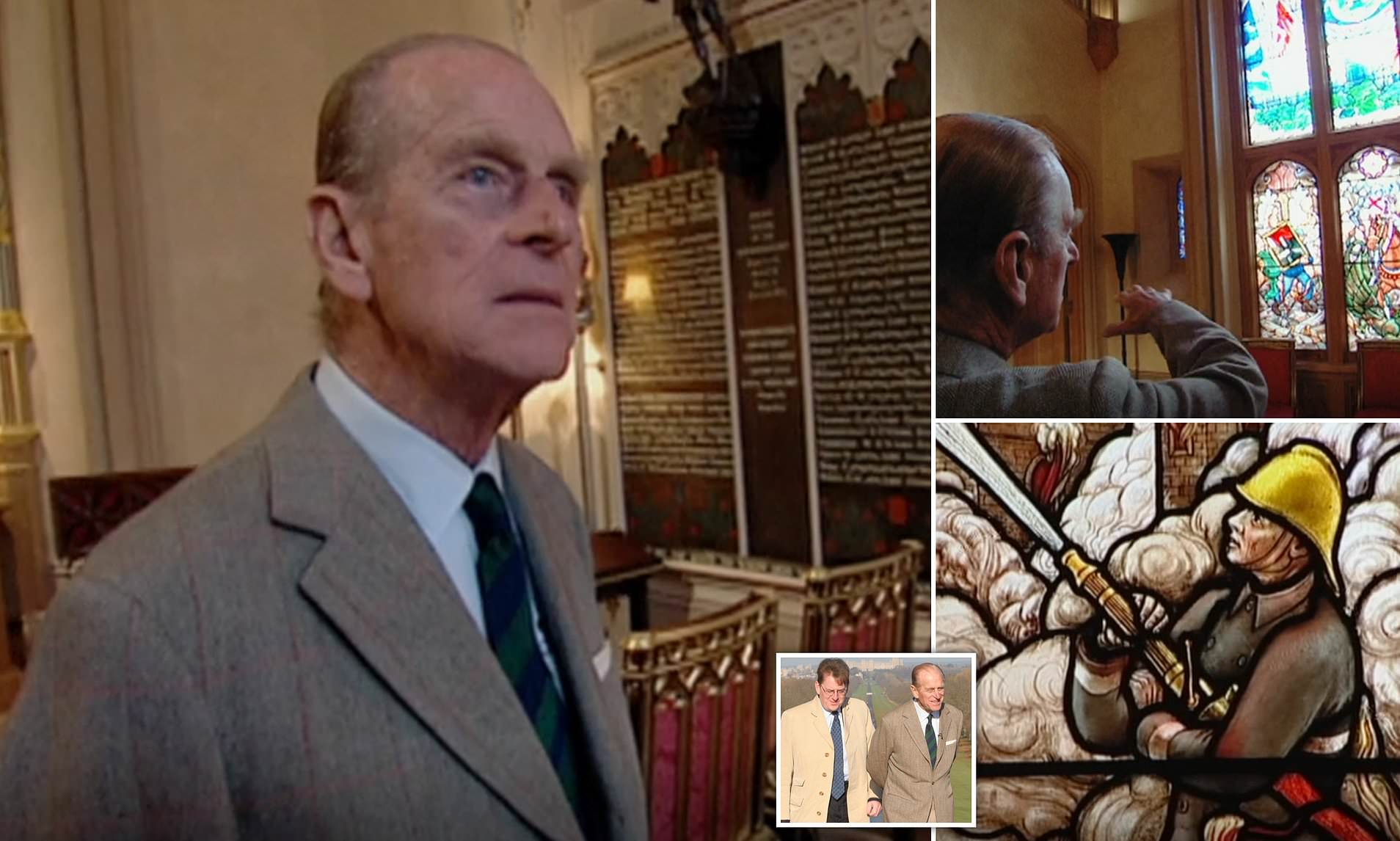 He could now be lying in state in Westminster Hall with many thousands filing past his coffin day and night, as they did before the last funeral of a royal consort, Queen Elizabeth the Queen Mother, in 2002.

Instead, in line with his own ‘no fuss’ mantra, Prince Philip is at rest in the small private chapel at Windsor Castle, visited by just a handful of family and friends.

But at least we are all able to have a proper look at this charming, little-known royal sanctuary and also to hear about it from the man who designed it — the Duke himself.

At the same time, we can also hear his considered views on life and death, religion, royal funerals, royal marriages — and everything else from garden design to Middle East peace talks (not to mention his irritation with pop concerts, ‘bug hunters’, plans for a Windsor oil rig and certain modern architects) — in a unique, unseen television portrait of the man himself.

In one of the last (and most extensive) interviews he ever gave, the Duke was in irrepressible form as he also offered us what now amounts to a guide to all the key elements of Saturday’s funeral.

It is part of a fascinating new BBC film packed with engaging glimpses of the Duke, many of which have never been seen before.

The Duke: In His Own Words features no ‘experts’, no grainy newsreel clips — just pure, undiluted Prince Philip.

These interviews were originally filmed some years ago as part of an acclaimed BBC series on Windsor called The Queen’s Castle. However, only a portion of the original material was included in that series.

To mark his passing, the producer, Andy Goodsir, has gone back through this mine of original footage to produce an entirely new tribute programme.

Narrated by the BBC’s Mishal Husain, it focuses not on the castle but on the Duke himself. At which point, I must declare an interest, since I have written this programme and the interviewer was me.

However, I can honestly say that these were some of the most enjoyable interviews I can recall, for the simple reason that the Duke was so passionate about every aspect of what will now be his final resting place (and was also very funny when I occasionally veered off into ‘damn fool question’ territory). Take the private chapel, for example. After the devastating fire of 1992, which destroyed so much of this ancient castle, the Queen put the Duke in charge of restoration. Except, he wanted to make the castle even better than it was.

So, the glum Victorian kitchen conversion went back to its true medieval splendour.

The Duke showed me the remains of an old portcullis he had unearthed and then steered me through a side door.

‘When I got back after the fire, and was looking at all this destruction,’ he recalled, ‘it struck me that you could just fit a chapel into here. Because before that the chapel was also a passageway.’ Now, it is a separate place of peaceful contemplation, unseen by visitors.

Facing the Duke’s coffin is the stained-glass window which he himself conceived and designed — although, typically, he tried to dodge the credit. ‘It’s not mine,’ he said, until I reminded him that I had actually seen his design, in his own hand, in the archives.

‘Well I suggested this sort of general idea, yeah,’ he conceded, as he explained the thinking behind the story which is now told in beautifully crafted panes of glass: ‘Well, the idea was that the bottom would be the fire and the fire-fighters and then the smoke would turn into trees . . .’

Among the greatest challenges facing the Duke was all the conflicting advice after the fire. ‘Country Life sponsored a public competition for redesigning the place,’ he remembered, but the designs were all ‘universally ghastly’.

He was similarly dismissive about a proposal to search for oil beneath the Windsor gardens. ‘Well yes it’s true. It all seemed to be absolutely dotty that somebody wanted to put an oil rig on the East Terrace,’ he said, not that he let the idea go any further. Besides, he had gone to great trouble to redesign the East Terrace gardens himself: ‘There used to be a bronze figure of a chap strangling a snake or something in the middle. So I took it away and designed that fountain, which I think’s rather nice.’

Among the more poignant elements in this weekend’s funeral procession will be the Military Knights of Windsor, a band of retired old soldiers who — much like the Chelsea Pensioners — live inside the castle and attend official events (in uniform). Explaining that they bring ‘a bit of pageantry’, the Duke went on: ‘What they’re supposed to do of course is to pray. Whether they actually do that or not, I’m not so sure. They used to have Naval Knights but they behaved so badly that they were eventually closed down!’

Behind the chapel is St George’s House, the religious conference centre he founded. It has even been involved in top-level Middle East peace discussions between Muslim, Christian and Jewish faith leaders, thanks to the Duke’s friendship with Prince Hassan of Jordan. ‘He said: “Surely, somehow or other we can diffuse it”— as we’re all religions of “the book’’ as they put it.’ The meetings went on, the Duke revealed, for 25 years.

He also drove me all over the estate where he was Ranger of the Great Park longer than anyone in history.

He showed me his farms (and his farm shop), entire avenues of new trees (which landed him in trouble with ‘bug hunters’ when he removed the old ones) and his ingenious barriers to keep out illegal pop concerts.

‘This is the family burial plot. You can see where the Duchess of Gloucester was buried the other day,’ he explained as we passed Frogmore where fresh earth lay on the grave of the late duchess.

As the Duke himself pointed out, it is precisely this personal dimension — the christenings, weddings and funerals — which gives Windsor its vitality.

‘I think that’s what gives it its attraction and its strength — a community and a living organism inhabiting this ancient establishment,’ the Duke explained.

‘William the Conqueror built his castle up here and it’s been occupied virtually ever since.’

That it is not just surviving but positively thriving is thanks in no small part to the subject of this film. Indeed, few people in Windsor’s entire 1,000-year history have left quite such a mark on the place as the man whom this great fortress and its titular family will salute on Saturday afternoon.

The duke’s coffin, accompanied by the Dean of Windsor and the Lord Chamberlain, will be moved to the State Entrance of Windsor Castle by a Bearer Party of The Queen’s Company, 1st Battalion Grenadier Guards.

The coffin will emerge and the Bearer Party will place it onto a specially modified Land Rover, which Philip helped to design, to transport it to St George’s Chapel.

The procession from the state entrance to the West Steps of the chapel will take eight minutes.

The Prince of Wales and members of the royal family will take part in the procession on foot, immediately behind the duke’s coffin, together with staff from Philip’s household.

The route of the procession will be lined by representatives drawn from the Royal Navy, the Royal Marines, the Highlanders, 4th Battalion Royal Regiment of Scotland and the Royal Air Force.

Minute guns will be fired by the King’s Troop Royal Horse Artillery from the east lawn of Windsor Castle for the duration of the procession, and the Curfew Tower Bell will toll.

A Guard of Honour and Band from The Rifles will receive the coffin at the foot of the West Steps, with the national anthem being played as the coffin enters Horseshoe Cloister.

A bearing party of Royal Marines will carry the coffin up the steps and pause for the minute’s silence.

Following the minute’s silence, the Dean of Windsor, together with the Archbishop of Canterbury, will receive the coffin at the top of the West Steps.

In keeping with coronavirus guidelines to limit guests inside the chapel, most of the procession will not enter the chapel, except for members of the royal family, and the duke’s private secretary Archie Miller Bakewell.

The funeral service will begin as the coffin enters St George’s Chapel.

Indonesian Shaman Leaves Bloody Past Behind for Peace of Christ