This is the adorable moment two orphan polar bears got their first swimming lesson from an adoptive human foster mother.

The cubs were born in captivity in December to a mother who refused to feed and raise them but six women at a Russian safari park stepped in to care for the helpless crying pair.

Video footage shows the 16-week cubs – one male, one female – beginning their all-important swimming lessons with one of their dedicated team of carers at the Gelendzhik Safari Park on the Black Sea. 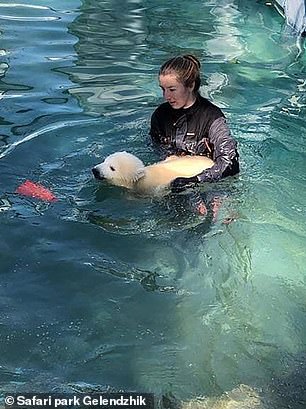 The polar bears, recently christened Yermak and Arktika-Avrora, were initially uncertain at first about the water.

The duo spent quite a while on ‘shore’, trying to persuade their ‘mum’ Elena Milovidova, 31, out of the pool by yelling and pulling her by her gloves.

Finally Yermak, the male cub, jumped in, and soon his sister Arktika-Avrora followed.

They rather gingerly dipped underwater – perhaps accidentally – and seemed to do well for a first attempt, even though they were mostly keen to reach their human mother and climb into her arms.

‘They puddled in shallow pools and played with water, but they were clearly scared to lose the feeling of firm ground under the feet,’ said a source at the park in southern Russia.

‘We realised one of our four ‘mother bears’ had to go into the pool, and stay there until cubs followed.’

They seemed relieved to get out of the water after their first try.

The pair were born to seven-year-old bear Seryozhka from the Novaya Zemlya archipelago in the Arctic Ocean, and an 18-year-old male bear Sedov in captivity in Krasnoyarsk, Siberia.

It was a round the clock role for the tiny babies whose eyes remained closed for weeks after they were born.

The cubs were first shown in public when they were seven weeks old receiving manicures and massages as well as warm milk.

Successfully breeding polar bears in captivity is exceptionally rare and has never happened previously in Russia.

The foster mothers are twins Anastasia and Olesya Sakhatskaya, both 39, Maria Moroz, 32 and Elena Milovidova, 31, who is seen swimming with the cubs.

‘They don’t seem to distinguish between the four of us,’ said Elena.

‘They know the scent of our skin and clothes, and sensing any of us getting close to them means just one thing: mother is here, and food is coming.’

‘There were no previous cases of nurturing polar bear cubs rejected by their mother in a Russian zoo,’ said Elena Milovidova, also deputy director of the Gelendzhik Safari Park.

‘This is the first experience for us.’

She said: ‘This is a unique experience for us, and an incredibly precious experience for the rest of the world because in all there were less than twenty cubs raised in captivity without a mother’s help during the last 50 years.

‘The statistic is incomparable to any other wild animal like elephants or orang-utans.

‘To nurture a polar bear cub is a task next to impossible.’

Attempts to coax the mother to give milk to feed her rejected cubs failed, but she gave blood which was used to give serum to the babies, vital as an immunity boost.

Human-Size Barrel Jellyfish Caught on Camera in the English Channel