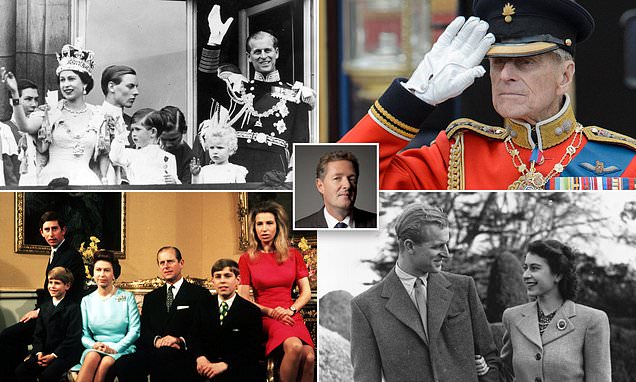 PIERS MORGAN: Thank you, Prince Philip – you were the greatest of Britons, a selfless, strong-willed and ferociously loyal man who devoted your life to public duty, your beloved Queen and your adoptive country

Dedication. Devotion. Duty. That’s all you need to know about Prince Philip. For 73 years, this extraordinarily selfless man gave his life to the service of his adoptive country and to his wife, the Queen. He was the longest-serving royal consort to any sovereign in British history. And he was tough, uncompromising, fiercely loyal, incredibly hard-working, unapologetically belligerent, and suffered fools as benevolently as a lion suffers a weak-willed gazelle in the African bush. The news of the Duke of Edinburgh’s death hit me hard. Whenever it mattered, there he was; indomitable, steely-eyed, jut-jawed. Philip could have been whatever he wanted to be, and he chose to be his wife’s protector and defender. My heart breaks for Her Majesty, a woman who has served as Queen for 68 years and barely put a regal foot wrong in those seven decades. She has lost the love of her life, and the man who helped her become the great Monarch that she is. Britain has lost one of its greatest servants. RIP Prince Philip. You were a truly great Briton who gave your life to selfless public duty and were an absolute rock of devoted support to The Queen.