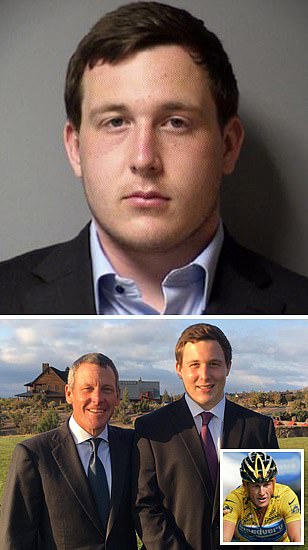 Lance Armstrong’s son Luke David Armstrong, 21, is facing a charge of sexual assault of a child, according to an affidavit from the Austin Police Department made public on Wednesday. The alleged assault took place in June 2018 after a party in the Texas capital city when Armstrong was 18, police said. The alleged victim, who was two years his junior, reported the incident to police last November. An attorney for Armstrong denied the allegations and claimed that his client had been in a months-long consensual relationship with the alleged victim, who has not been named publicly. Pictured: Luke Armstrong in his mugshot (top), with his father Lance Armstrong (bottom) and Lance Armstrong during his cycling career (inset).