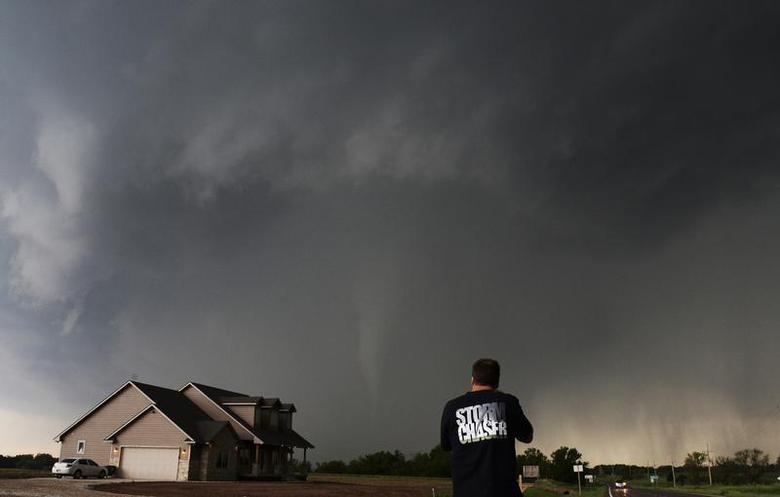 The South is bracing for another possible tornado outbreak just one week after 49 confirmed tornadoes tore through the region on St. Patrick’s Day.

About 33 million people will be at risk for severe thunderstorms Thursday that could bring strong, long-lived tornadoes, hail up to the size of baseballs or larger and damaging winds in excess of 75 mph, according to the National Oceanic and Atmospheric Administration’s Storm Prediction Center.

Possible rain and thunderstorms are likely to start Thursday morning, which will clear out by the afternoon, setting the stage for a more volatile atmosphere later in the day. The severe thunderstorms will likely begin around lunchtime across portions of Louisiana and Mississippi, then will move east through the day bringing the risk for severe storms to Tennessee, Alabama and Georgia.

Several large metro areas including New Orleans; Jackson, Mississippi; Memphis, Tennessee; Nashville, Tennessee; Birmingham, Alabama; and Atlanta are in the threat zone for these severe thunderstorms. Some of these cities are still clearing out damage from the string of tornadoes that hit the same region last week.

Compounding the danger will be the fact that storms will likely be moving very fast, which could reduce preparation time for people put under warnings to seek shelter. Fast storm motions could also mean tornadoes will be able to cover more distance — what meteorologists call “long-track” tornadoes. There was one such instance last week, where one tornado stayed on the ground for nearly 35 continuous miles.

There is also concern that these storms could last through the night Thursday into Friday. Nocturnal tornadoes are more than twice as likely to be fatal. Meteorologists urge those in the danger zones to make sure their cellphones are charged and emergency alerts are turned on to ensure they will hear tornado warning alerts if they’re sleeping.

Severe thunderstorms will also be likely on Wednesday afternoon and evening that could affect 11 million people. Included in that warning is Dallas, which could see thunderstorms capable of large hail, strong winds and isolated tornadoes. The storms will get going around the I-35 corridor Wednesday afternoon, then form into a line of storms that could persist overnight as they move east.