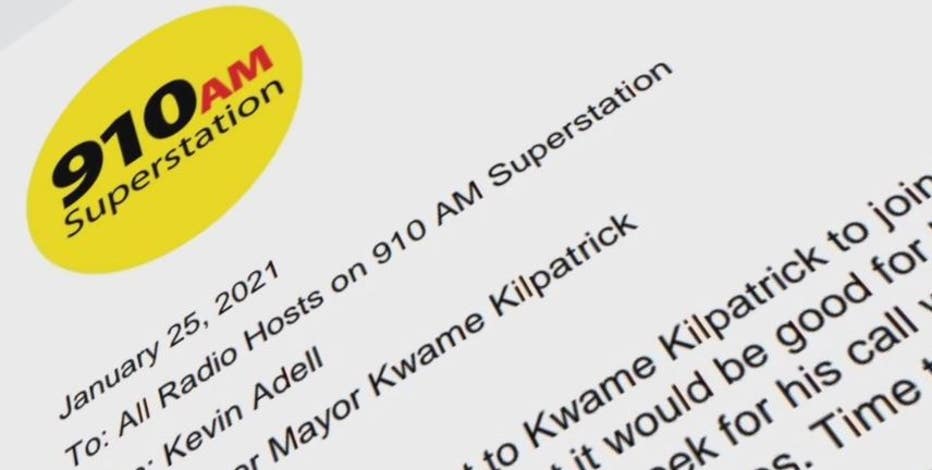 But Kilpatrick never responded, Adell says, rebuffing an offer that could help the politician satisfy probation conditions that include securing a job, and paying more than $1.7 million in restitution to the Internal Revenue Service and the Detroit Water and Sewerage Department.

“He blew it,” Adell told The Detroit News on Tuesday. “I don’t want him on. We don’t want drama here.”

He heard through intermediaries that Kilpatrick was interested in hosting a radio show on 910 AM as part of a broader plan that includes starting a ministry. Adell drafted a proposal for Kilpatrick to host a two-hour radio show, an unpaid gig that would provide a platform and potential income through paid advertising.

“Selling ads is like climbing Mt. Everest with flip-flops,” Adell said. “Everyone here at 910 doesn’t get paid. But it gives you an opportunity for a platform you wouldn’t have otherwise.”

The station owner gave his cellphone number to the Kilpatrick intermediaries, whom he declined to identify.

Disgraced Ex-Detroit Mayor Kwame Kilpatrick and Former Chief of Staff Christine Beatty Open Up About Their Four-Year Affair From Over a Decade Ago for...

The Word Network Files FCC Complaint Against Comcast, Xfinity, and NBC For ‘Unjust Removal’ of Its Programming

WATCH: Promo for Queen Latifah’s New Docu-Series, “From the Bottom Up’

Queen Latifah, Nicci Gilbert Team Up to Produce New Centric Show ‘From The Bottom Up’