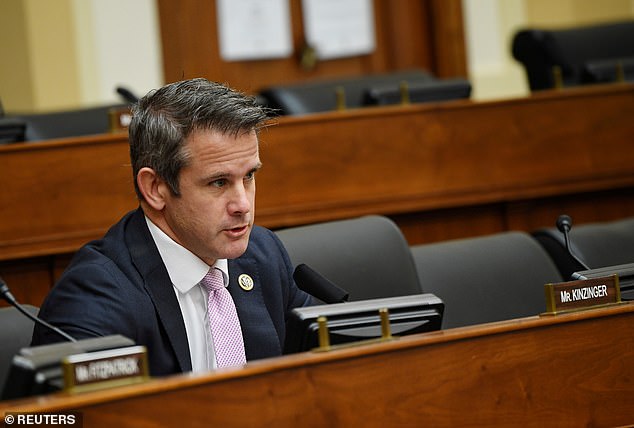 Illinois Republican Rep. Adam Kinzinger has released a scathing handwritten letter he received from a number of his relatives, calling him a ‘disappointment to God’ and a stain on their family’s name for backing the impeachment of Donald Trump.

Kinzinger told the New York Times he received the disparaging note just two days after he called for Trump to be removed from office following the Capitol riots on January 6.

Penned by 11 members of his extended family, Kinzinger was accused in the letter of being in cahoots with ‘the devils army (Democrats and the fake news media)’ for publicly opposing the then-president, and requesting the 25th Amendment be invoked against him.

It begins: "Oh my, what a disappointment you are to us and to God!" https://t.co/EWD2YZO49X pic.twitter.com/RcgmRmYKjc

‘Oh my, what a disappointment you are to me and to God!’ the letter, dated January 8, begins. ‘We were once so proud of your accomplishments! Instead, you go against your Christian principals and join the “devil’s army”.’

‘How do you call yourself a Christian when you join the “devil’s army” believing in abortion!’ the note continues. ‘We thought you were “smart” enough to see how the left is brainwashing so many.’

Kinzinger’s family then go on to accuse him, and ‘many other GOP members’, of being ‘brainwashed’ by Democrats and ‘falling for their socialism ideals’.