The Buccaneers signed quarterback Tom Brady this offseason for moments like this: to go head-to-head with a New Orleans Saints team that has had an unrelenting grip on the NFC South, to get Tampa Bay back to the postseason for the first time in 13 years, and to become the first team in NFL history to host a hometown Super Bowl.

The Bucs are one step away from completing that trilogy.

In the second stop of a playoff odyssey that began with a wild-card game on the road — a first in Brady’s 21-year career — Tampa Bay defeated New Orleans 30-20 on Sunday night. The Saints had swept the Bucs in the regular season, outscoring them by 46 points in two games.

Up next: Lambeau Field, against the Green Bay Packers in the NFC Championship Game. It will be Brady’s 14th conference title game and the Bucs’ fourth, after most recently defeating the Philadelphia Eagles 27-10 on the road en route to winning Super Bowl XXXVII following the 2002 season.

Against the Saints, Brady completed 18 of 33 passes for 199 yards, two touchdowns through the air, one on the ground and no interceptions. He is now 3-5 against Saints quarterback Drew Brees, although defense and the ground game told the story. The Saints frequently lined up with deep safeties, focusing on preventing big plays downfield.

Bucs running backs Leonard Fournette and Ronald Jones combined for 169 yards from scrimmage. Saints receiver Michael Thomas was held without a catch, and the Bucs got three takeaways that led to touchdowns.

Bucs cornerback Sean Murphy-Bunting picked off Brees on a pass intended for Thomas in the second quarter, returning it 36 yards to the New Orleans 3-yard line. Then, Bucs receiver Mike Evans punctuated the possession with a 3-yard touchdown — his first catch of the season against Saints cornerback Marshon Lattimore.

Then in the third quarter, Bucs rookie safety Antoine Winfield Jr. dislodged the ball from the hands of Saints tight end Jared Cook, with Bucs inside linebacker Devin White scooping it up and returning it 18 yards. Fournette then caught a 6-yard touchdown pass from Brady on a slant route.

In the fourth quarter, White picked off Brees on a pass intended for New Orleans’ Alvin Kamara, with Brady eventually running it in for a 1-yard score. Later, Bucs safety Mike Edwards picked off a pass from Brees that was tipped by Bucs linebacker Lavonte David. 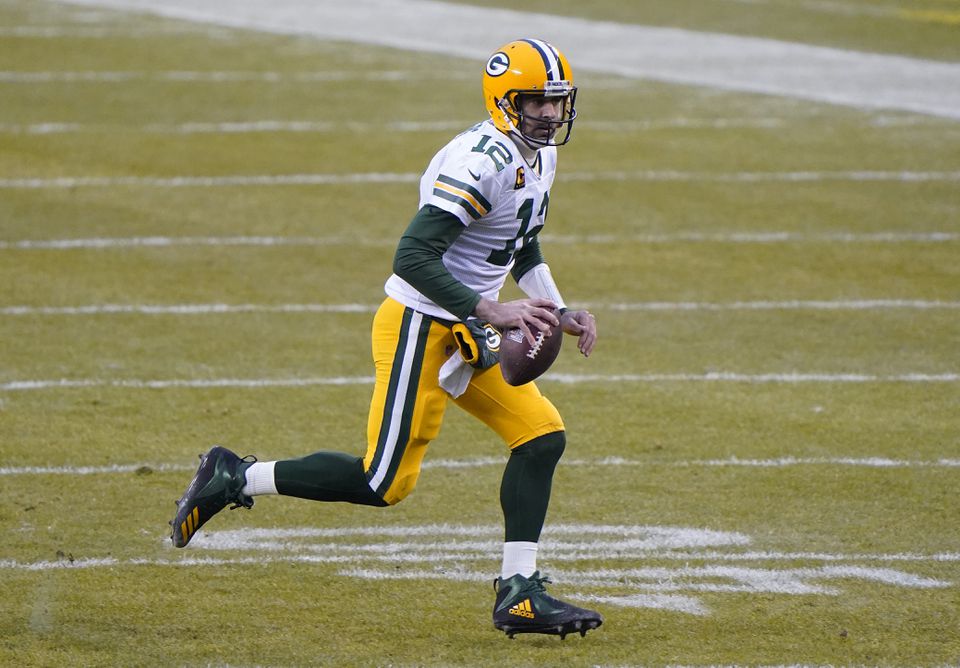