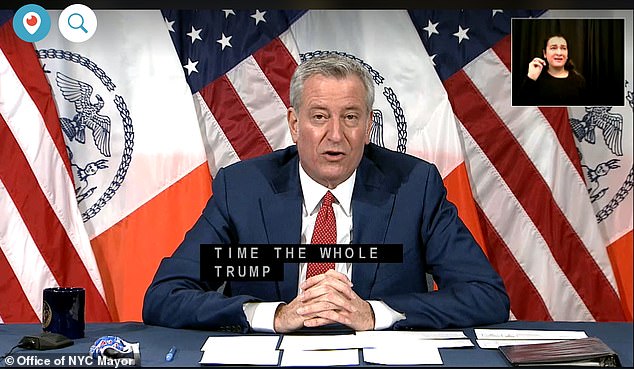 Mayor Bill de Blasio has warned that New York City is on track to run out of COVID-19 vaccines next week, as he begged the federal government to send more doses and announced the Big Apple is on target to reach its goal of one million shots in arms by the end of the month.

Speaking at his daily press briefing, de Blasio said Wednesday he has ‘no patience’ for the federal government and the vaccine manufacturers for the slow rollout of shots and demanded the Trump administration releases the second doses currently being held back from states.

The mayor revealed that the New York Yankees has followed the Mets in agreeing to work with the city to turn its stadium into a 24/7 mass vaccination site, while new round the clock sites are springing up across the five boroughs.

Another 28,599 doses were administered to New Yorkers Tuesday, taking the total number of shots in arms to 267,923, with 237,991 people having got the first dose and 29,932 the second, the city’s health department data shows Wednesday.

With an estimated population of 8.34 million according to the latest data from the US Census Bureau, this means just around 2.85 percent of New York City residents have been given the first dose almost exactly one month since the vaccine was given to the first American back on December 14.

Statewide, 3.42 percent of the population have been vaccinated with at least the first dose, Bloomberg data shows, with Governor Andrew Cuomo reporting that 665,172 doses had been administered by 3 p.m. Tuesday.

New York City has received 793,675 doses from the federal government to date, meaning only around a third – 33.7 percent – of doses have been given to New Yorkers with the remaining two-thirds still sitting waiting to be used.

Similarly, the state has administered just 41 percent of its available 1.62 million doses so far, according to Bloomberg.

Though New York state is doing better than the national average of 35.9 percent of the population, the slow rollout comes as the statewide positivity rate reached 7.4 percent and another 165 people died.

Fears over the spread of the highly contagious coronavirus variant first identified in the UK are also increasing, with two New York City residents confirmed to have contracted the strain Wednesday.