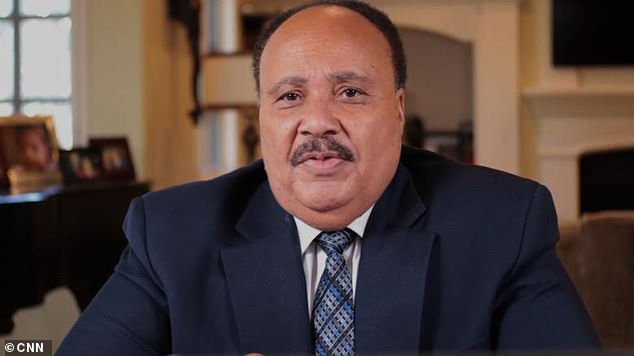 ‘My father always believed in the people of our nation. Certainly, he would be greatly disappointed in how we have chosen to conduct ourselves at this particular moment, but most particularly probably disappointed in the commander in chief, because the commander in chief is supposed to bring people together and not to bring people together to actually intercept your government.

‘If he saw the issues of poverty and income inequality that exist today he would be greatly disappointed.

‘He understood we are a United States of America, not a divided state of America, and he would be telling us we must turn to each other, not turn on each other,’ said King as he spoke to CNN on the MLK Day, a federal holiday honoring his father.

The son of the civil rights movement leader said he believes President-elect Joe Biden and his administration should focus on leading the country and bring people together to address all of the issues affecting America including the Covid-19 pandemic, police brutality and misconduct as well as climate change.

‘We’re going to see a new air brought in,’ he said.

‘If you really want to celebrate Martin Luther King Jr. Day and the principles that my father stood for, our whole government needs to step up, from creating a cabinet position focused on fighting poverty to passing a universal basic income,’ King added.