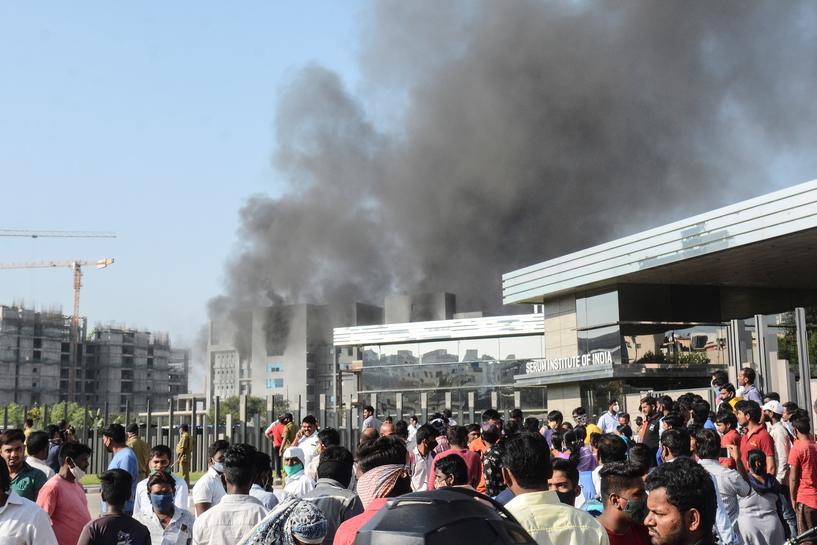 A big fire on Thursday at the Serum Institute of India killed five people, a government official told reporters, but the world’s biggest vaccine maker said it would not affect production of the AstraZeneca coronavirus shot.

Videos and pictures from Reuters partner ANI showed black smoke billowing from a multi-storey building in SII’s massive headquarters complex in the city of Pune in Maharashtra state.

“We have learnt that there has unfortunately been some loss of life at the incident,” SII Chief Executive Adar Poonawalla said on Twitter. “We are deeply saddened and offer our deepest condolences to the family members of the departed.”

Pune Mayor Murlidhar Mohol said four people had been evacuated but five others had died. The Maharashtra state government said the fire could have been caused by an electrical fault during construction work.

SII has licensed the shot developed by Oxford University and AstraZeneca, and was also planning to start stockpiling up to 50 million doses a month of a vaccine candidate developed by Novavax Inc from around April.

Many low- and middle-income countries, from Bangladesh to Brazil, are depending on SII delivering the AstraZeneca vaccine, branded COVISHIELD by the Indian company.

“I would like to reassure all governments & the public that there would be no loss of COVISHIELD production due to multiple production buildings that I had kept in reserve to deal with such contingencies,” Poonawalla said.

Poonawalla, whose family owns SII, was quoted as saying by broadcaster CNBC-TV18 that the fire would mean delays in launching new products and revenue losses of more than 10 billion rupees ($137 million). Equipment worth millions of dollars has been damaged, he said.

SII is producing around 50 million doses of the AstraZeneca vaccine a month at other facilities in the complex, with plans to increase that to as much as 100 million doses soon.

The AstraZeneca vaccine is already in use in India and has been shipped to countries such as Bangladesh, Nepal, the Maldives and Bhutan.