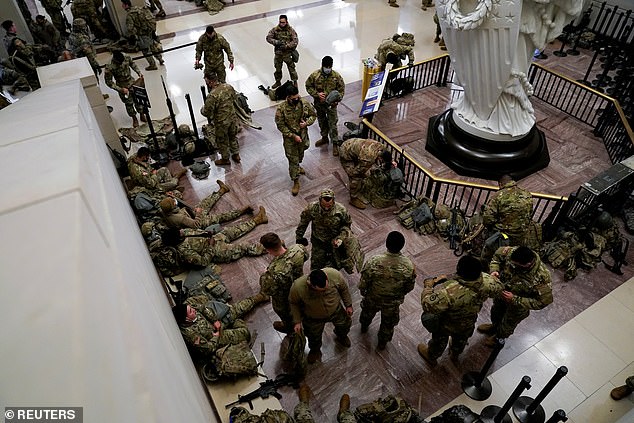 Facebook has warned of an increase in signals indicating that the Capitol siege was a ‘galvanizing event’ that is spawning plans for future gatherings nationwide.

A spokeswoman for the social media giant, who asked not to be named for security reasons, said they have tracked digital flyers promoting such events, some of them featuring calls to arms or the insignia of militias or hate groups.

The FBI has warned of armed protests being planned for Washington and all 50 U.S. state capitals in the run-up to the inauguration. That follows last week’s violent siege which resulted in the deaths of four protesters and one officer.

Pictures Wednesday show hundreds of National Guard troops sleeping on the stone floor of the US Capitol as security intensifies in Washington DC and the capital goes into lockdown a week out from Joe Biden’s inauguration.

Up to 15,000 National Guard members will also be on hand to protect D.C. It is believed to be the first time troops have set up camp in the Capitol since the Civil War.

But security officials have admitted they are managing ‘a very delicate risk management process’ to ensure state capitols are also well protected.

It comes after newly surfaced video shows MAGA rioters discussing floor plans and police positioning as they plotted to ‘take over’ the Capitol in Washington DC last week.

The two-minute clip, which was originally posted live on Periscope last week by reporter Jeremy Lee Quinn, shows a dozen-strong group of pro-Trump insurrectionists hatching a detailed plan to ‘take this building’ while standing inside what appears to be an office inside the legislature.

Its re-emergence on Twitter Wednesday comes after House Democrat Mikie Sherrill claimed that she witnessed members of Congress leading ‘reconnaissance’ tours through the Capitol the day before the mob stormed the building – indicating lawmakers may have helped protesters get inside.