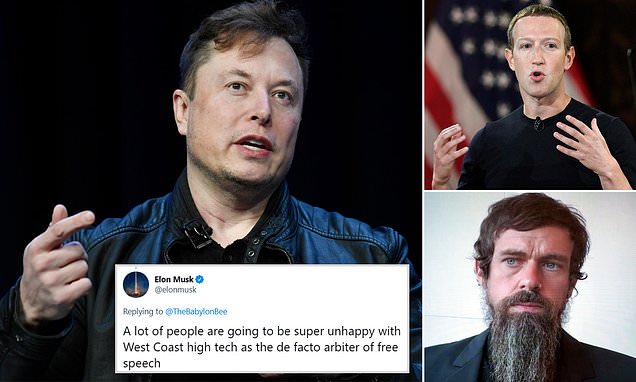 Elon Musk has torn into the ‘West Coast high tech’ who have turned into the ‘de facto arbiter of free speech’ after Amazon scrubbed Parler from the internet.

The Tesla and SpaceX CEO had replied to a satirical tweet about Twitter and Facebook banning Donald Trump from their platforms. Twitter also permanently banned Trump loyalists as part of a broader purge of accounts.

Musk said Monday: ‘A lot of people are going to be super unhappy with West Coast high tech as the de facto arbiter of free speech.’

Replying to another user who said ‘West Coast high tech has to make the distinction between banning hate speech and banning speech it hates’, Musk added: ‘This is an important distinction.’

Parler went offline shortly after 3am EST Monday after Amazon booted the platform off its web hosting service, effectively shutting the site down until it can find a new hosting partner or fund its own servers.