Legendary award-winning actress Cicely Tyson, known for her onscreen portrayals of strong black women, has died at the age of 96.

Tyson’s family announced her death on Thursday in a statement via her manager Larry Thompson.

‘With heavy heart, the family of Miss Cicely Tyson announces her peaceful transition this afternoon. At this time, please allow the family their privacy,’ Thompson said. No cause of death was given.

Tyson, who had just turned 96 in December, had received numerous accolades over the course of her television, film, and stage career that spanned over six decades.

Her most-lauded performances came in historical works such as the 1972 movie Sounder in which she played a Louisiana sharecropper’s wife. That film earned her only Academy Award nomination, but she received an honorary Oscar in November 2018.

She recently said in interviews that she had no plans to retire, and had continued taking on film and television roles up until her death.

She was due to reprise her role as Miss Luma Lee Langston in the second season of OWN series Cherish the Day that premiered last February. She also had a recurring role as Ophelia Harkness in ABC legal drama How to Get Away with Murder since 2014, for which she received five Emmy nominations for Outstanding Guest Actress.

Tyson recently starred in Tyler Perry’s 2020 Netflix thriller, A Fall from Grace, her final film role before her death.

Days before her passing, she released her new memoir, Just As I Am, which she promoted in an appearance on CBS This Morning with Gayle King earlier this week.

Her manager Larry Thompson said that she ‘thought of her new memoir as a Christmas tree decorated with all the ornaments of her personal and professional life.’

‘Today she placed the last ornament, a Star, on top of the tree,’ he said in a statement Thursday.

A onetime model, Tyson began her screen career with bit parts but gained fame in the early 1970s when black women were finally starting to get starring roles. She refused to take parts simply for the paycheck, remaining choosey.

‘I’m very selective as I’ve been my whole career about what I do. Unfortunately, I’m not the kind of person who works only for money. It has to have some real substance for me to do it,’ she told The Associated Press in 2013.

Besides her Oscar nomination, Tyson had won two Emmys for playing the 110-year-old former slave in the 1974 television drama ‘The Autobiography of Miss Jane Pittman.’

Tributes from Broadway and Hollywood poured in on social media in the wake of her passing, including from Broadway star Tracie Thomas, who thanked her for paving the way. ‘A queen and a trailblazer indeed,’ she wrote on Twitter.

Former co-star Marlee Matlin wrote: ‘She was a consummate pro and all class.’ Director Kenny Leon added: ‘God bless the greatest and the tallest tree.’

‘This one hurts, today we honor and celebrate the life of one of the greatest to ever do it. Thank you Cicely Tyson. Rest in great power.’ actress Zendaya tweeted.

‘She had so much to teach. And I still have so much to learn. I am grateful for every moment. Her power and grace will be with us forever,’ Rhimes said in a touching Instagram post.

‘The world lost a trailblazer today. #CicelyTyson paved the way for so many artists after her and beautifully portrayed iconic roles such as Harriett Tubman and my mother, Coretta Scott King. Rest in peace, Cicely. You will be missed,’ Martin Luther King III tweeted.

Tyson’s had career boomed even in her 80s and 90s. In 2011, she was part of the ensemble of the much-praised film The Help and in 2013, at age 88, she won a Tony for a Broadway revival of The Trip to Bountiful, the story of a woman returning to her small hometown. It was her first time on Broadway in 30 years.

She was also one of the recipients for the 2016 Presidential Medal of Freedom, the nation’s highest civilian honor.

At that ceremony, President Barack Obama said: ‘Cicely’s convictions and grace have helped for us to see the dignity of every single beautiful memory of the American family.’

In February 2019 at age 94, Tyson was on the cover of Time magazine’s ‘The Art of Optimism’ edition and an interviewer asked if she had considered retiring. ‘And do what?’ was her response.

Tyson’s parents moved from the island of Nevis in the Caribbean to New York, where Cicely (her name was spelled early on as Cecily and Sicely) was born in 1924, the youngest of three children. When her parents separated, the mother went on welfare. At age nine, Tyson sold shopping bags on the streets of East Harlem. 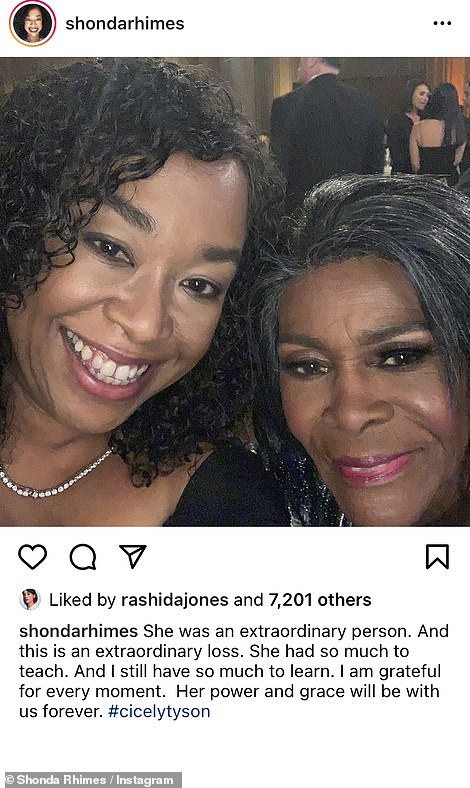 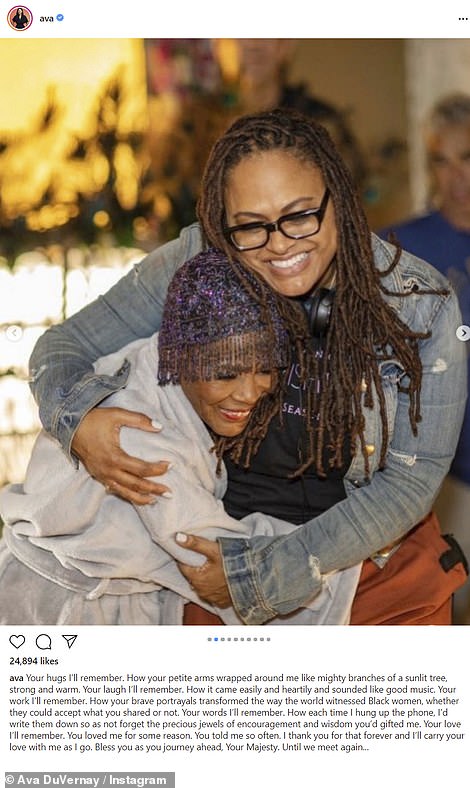 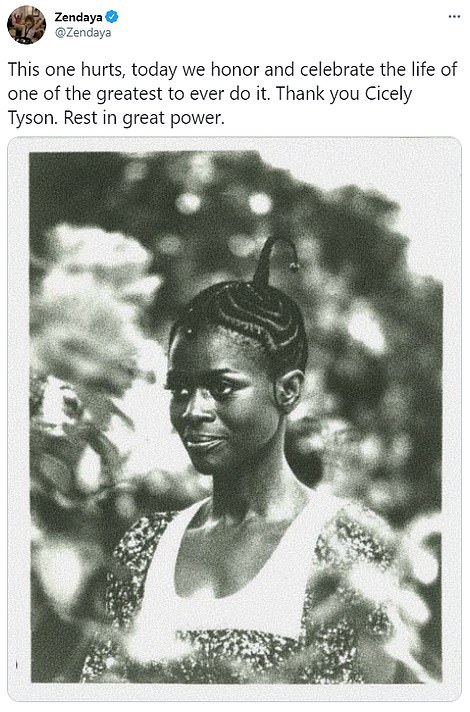 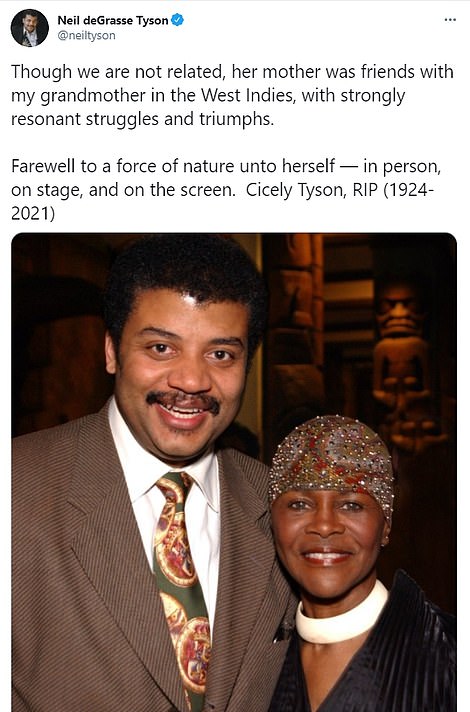 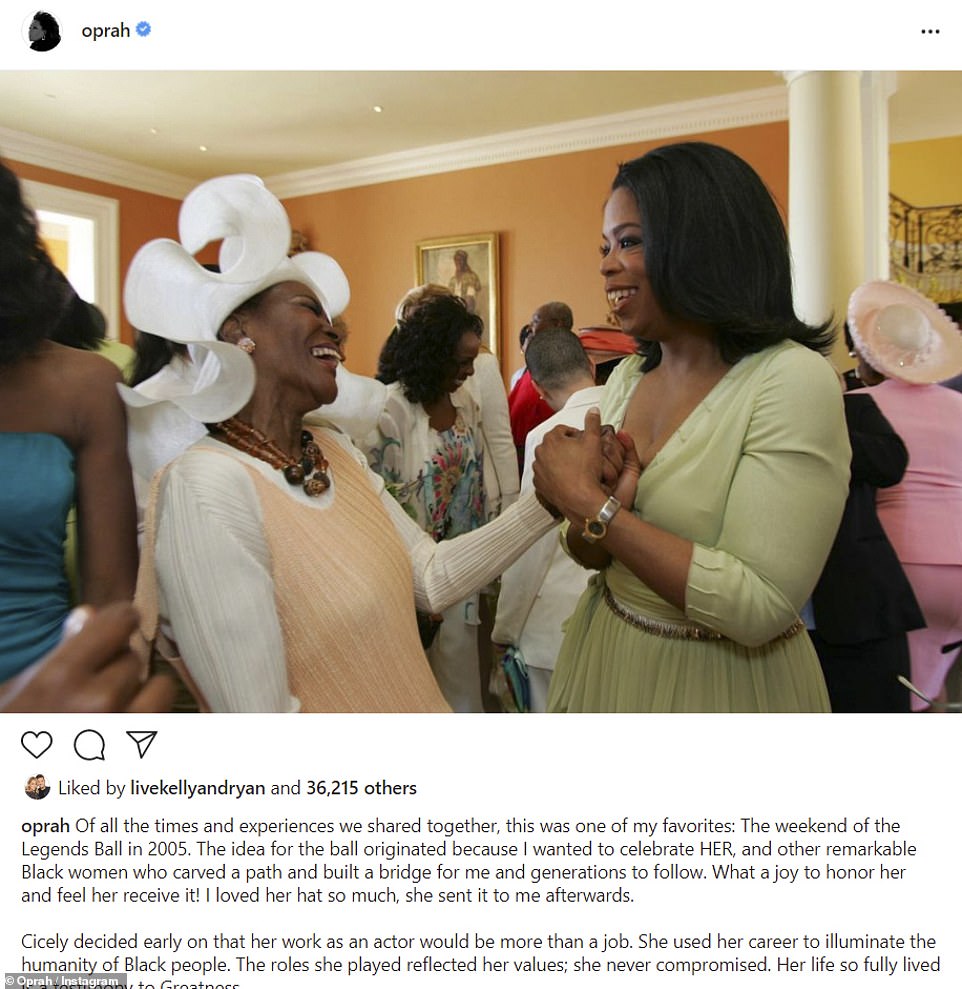 When she graduated from high school, she found work as a secretary at the Red Cross. Her striking looks prompted friends to advise her to take up modeling and that led to acting schools, theater, movies and television.

‘My mother told me I could no longer live in her house because I was determined to be an actress,’ she told an interviewer in 1990. ‘I said “OK,” and I moved out.’

She was a secretary and model before taking acting jobs in the 1950s. In the early 1960s, she became one of the first black actors to appear regularly on US television, playing George C. Scott’s secretary on the series ‘East Side, West Side.’ Her rise to fame began in the early 1970s when black women were finally starting to get starring roles.

Sounder, based on the William H. Hunter novel, was the film that confirmed her stardom in 1972. Tyson was cast as the Depression-era loving wife of a sharecropper (Paul Winfield) who is confined in jail for stealing a piece of meat for his family. She is forced to care for their children and attend to the crops.

The New York Times reviewer wrote: ‘She passes all of her easy beauty by to give us, at long last, some sense of the profound beauty of millions of black women.’ 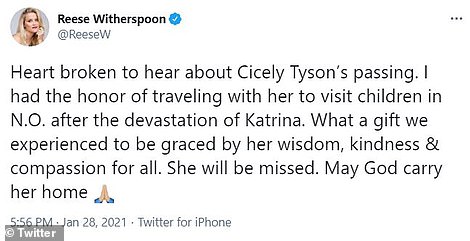 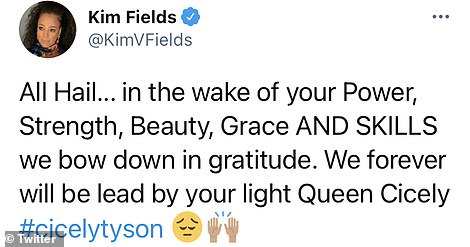 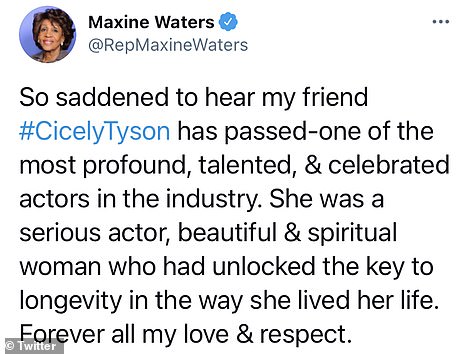 Her performance evoked rave reviews, and Tyson won an Academy Award nomination as best actress of 1972.

In an interview on the Turner Classic Movies cable channel, she recalled that she had been asked to test for a smaller role in the film and said she wanted to play the mother, Rebecca.

In 2013, at the age of 88, Tyson won the Tony for best leading actress in a play for the revival of Horton Foote’s The Trip to Bountiful. It was the actress’s first time back on Broadway in three decades and she refused to turn meekly away when the teleprompter told to finish her acceptance speech.

‘Please wrap it up, it says. Well, that’s exactly what you did with me: You wrapped me up in your arms after 30 years,’ she told the crowd.

She told The AP afterward she had prepared no speech – ‘I think it’s presumptuous’ – and that ‘I burned up half my time wondering what I was going to say.’

She reprised her role in a Lifetime Television movie, which was screened at the White House.

Tyson told People magazine in 2015 that she used her career to take on issues important to her, such as race and gender.

In an interview with CBS she said she saw the Hollywood hierarchy as a ladder with white men at the top, followed by white women and black men. black women were at the bottom.

‘And we’re holding on to the last rung,’ she said. ‘And those fists are being trampled on by all those three above and still we hold on.’

One of her early stage roles was in The Blacks, an off-Broadway production about race that helped boost the careers of Jones, Maya Angelou, Louis Gossett Jr., Godfrey Cambridge and Roscoe Lee Brown.

Tyson took parts as prostitutes in two other plays in the 1960s before deciding to make a stand.

‘After that, I was offered the part of another whore and I said no because I didn’t want to get typecast and because it was demeaning to black women,’ she told the New York Times.

In the 1974 television drama ‘The Autobiography of Miss Jane Pittman,’ based on a novel by Ernest J. Gaines, Tyson is seen aging from a young woman in slavery to a 110-year-old who campaigned for the civil rights movement of the 1960s.

In the touching climax, she laboriously walks up to a ‘whites only’ water fountain and takes a drink as white officers look on.

‘It’s important that they see and hear history from Miss Jane’s point of view,’ Tyson told The New York Times. ‘And I think they will be more ready to accept it from her than from someone younger.’

New Yorker film critic Pauline Kael offered her praise: ‘She’s an actress, all right, and as tough-minded and honorable in her methods as any we’ve got.’

At the Emmy Awards, ‘Pittman’ won multiple awards, including two honors for Tyson, best lead actress in a drama and best actress in a special.

‘People ask me what I prefer doing – film, stage, television? I say, ‘I would have done ‘Jane Pittman’ is the basement or in a storefront.’ It’s the role that determines where I go,’ she told the AP.

Tyson was married to jazz trumpet legend Miles Davis from 1981 through 1988 and Davis, who died in 1991, put her on the cover of his album ‘Sorcerer.’

Their marriage was a rocky one, troubled by reports of his alleged philandering, domestic violence and substance abuse. But in a 2015 interview with CBS, Tyson said: ‘I don’t really talk about it but I will say this: I cherish every single moment that I had with him.’

David Jeremiah on Discovering the ‘Why’ in Our Lives