National Guard members began leaving Washington D.C. on Saturday as angered governors recall troops amid controversy over the conditions they suffered while protecting the U.S. Capitol during Joe Biden’s inauguration.

There were 25,000 troops stationed in D.C. on Wednesday amid fears of a repeat of the violence seen on January 6 when a MAGA mob stormed federal building.

Up to 7,000 service members are expected to remain in the Capitol until February 6 as concerns remain that Biden’s first State of the Union address will be targeted that week.

Of those, 5,000 troops are predicted to stay until mid-March, Guard spokesperson Maj. Matthew Murphy told Politico.

Yet at least eight governors, including Florida’s Ron DeSantis and Chris Sununu in New Hampshire, have already pulled back troops, angered at their treatment.

Both appeared on Fox News to slam the decision to keep the troops in D.C. after service members were seen sleeping in a freezing parking lot on their breaks, and it emerged that up to 200 members deployed there have since tested positive for COVID-19.

The Guard said that Capitol Police had ordered the troops to leave the Capitol building and take their rest breaks in a nearby designated parking lot instead of the federal building.

Photos showed up to 5,000 Guardsmen sleeping on the floor of the packed Thurgood Marshall Building parking lot and in a park outside as temperatures hit a low of 40 degrees.

DeSantis blasted it as a ‘half-cocked mission’, claiming they were soldiers not ‘servants’, while Sununu said that the treatment of the troops was ‘demeaning’ and ‘disrespectful’.

‘They’re not Nancy Pelosi’s servants,’ fumed DeSantis as he appeared on Fox & Friends on Friday morning. 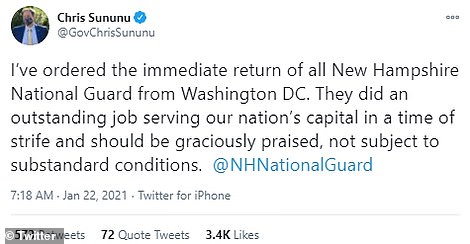 The Florida governor also took issue with reports that members were vetted ahead of the inauguration amid fears that the event could be targeted by a person on the inside. There were 12 troops dismissed as a result.

‘And this comes on the back end of them trying to investigate the backgrounds of our Guardsmen,’ DeSantis added.

‘Florida, we did not let them go into their political beliefs. I thought that was totally inappropriate. I thought it was very disrespectful for people who are clearly patriots. So, this is a half-cocked mission at this point, and I think the appropriate thing is to bring them home.’

DeSantis was backed by Texas Governor Greg Abbot who had sent 1,000 troops for the inauguration but vowed in a tweet that he would never do so again.

‘This is the most offensive thing I’ve ever heard,’ Abbott tweeted Monday. 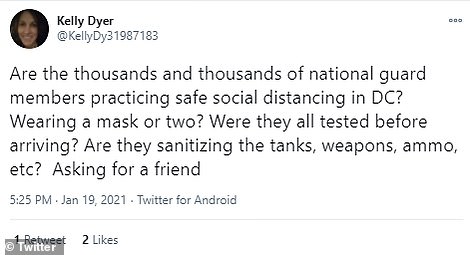 ‘No one should ever question the loyalty or professionalism of the Texas National Guard. I authorized more than 1,000 to go to DC. I’ll never do it again if they are disrespected like this.’

DeSantis and Abbot were joining in calling troops home by the governors of New Hampshire, Montana, Alaska, Massachusetts, Arizona, and Tennessee.

Tennessee’s Governor Bill Lee said he was ‘very disappointed in the way this mission came to a close & the overall treatment of the National Guard in DC’.

‘We are bringing home our National Guard members from D.C. They served with distinction,’ said Alaska’s Governor Mike Dunleavy. ‘Some guardsmen from other states were treated in a fashion inconsistent with how our service members should be treated.’

Coronavirus Plague Shuts Down Adele’s Mega-Millions Las Vegas Residency Just 24 Hours Before Opening Night Due to Coronavirus Cases Among the Crew Members Despite...