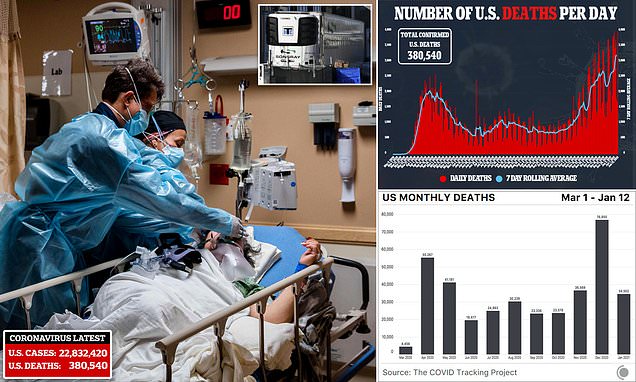 The US now has its own homegrown ‘super-covid’ variants that are more infectious than the most common coronavirus types in the US – and the new variants are spreading like wildfire in at least one state, Ohio scientists revealed Wednesday.

One of the new, more infectious variants has already become dominant in Columbus, Ohio, where it was discovered. This unique US variant has three mutations not seen in the others from the UK and South Africa.

So far, this homegrown variant has been seen in about 20 samples since Ohio State University (OSU) scientists first detected it in December. It’s now present in most of the samples they are sequencing.

A second variant has mutations identical to the UK variant’s, but arose completely independently on American soil, according to Ohio State University scientists. Just one person with this variant has been found.

‘It has a variant backbone that is in common with the UK and South African variants,’ but is separate, said Dr Daniel Jones, one of the Ohio State University (OSU) scientists involved in the discovery of the variants.

‘We are now in a period where the virus is changing quite substantially…so we are concerned,’ at least over the transmissibility, said Dr Jones.

It comes after Dr Deborah Birx warned over the weekend that the patter of COVID-19 case spikes suggested the US could already have its own 50 percent more infectious ‘super-covid’ variant.

Scientists are quite sure both American variants are more infectious, but don’t know yet whether they will be immune to vaccines. The Columbus variant is not currently thought to be deadlier, but scientists are ramping up their search for cases of it to monitor how sick people who catch it get.

‘Super-covid’ variants are not yet dominant in the broader US, but three Americans died of COVID-19 every minute yesterday. The death toll spiked to a record high cases and hospitalizations continue to surge and hard-hit Los Angeles says children are apologizing to their dying relatives for spreading the virus.

The United States recorded a staggering 4,327 deaths on Tuesday, bringing the total death toll to more than 380,000 – more than the past 10 flu seasons combined.

The seven-day rolling average for deaths is now at more than 3,200 per day.

In the first 12 days of this month, 34,534 Americans have already died of COVID. That toll is more than the entire monthly totals recorded from June to November last year.