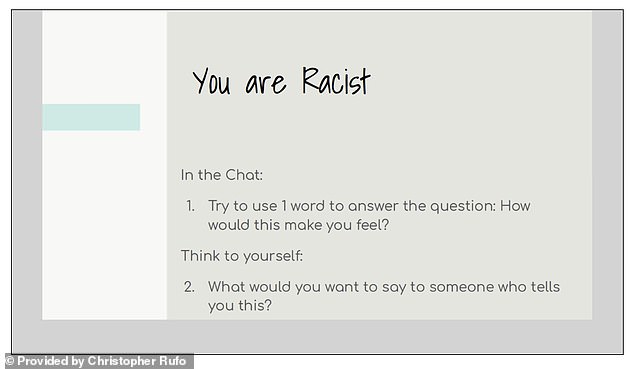 Teachers in San Diego are reportedly being required to attend a ‘white privilege’ training in which they are asked to commit to becoming ‘anti racist’ and acknowledge that they meet on stolen land taken from Indigenous peoples.

According to documents shared by journalist Christopher F. Rufo, the training is mandatory for all teachers within the San Diego Unified School District.

As part of the training, the teachers are told to discuss how they would feel if they were told: ‘You are racist.’

Teachers were also asked to discuss how they’d feel if they were told: ‘You are upholding racist ideas, structures, and policies.’

The documents, which were leaked by Rufo, show the outline of the discussion and the talking points, including how teachers must become ‘anti racist’ activists’.

In order to do this, teachers have to ‘confront and examine [their] white privilege,’ acknowledge ‘white fragility’ and ‘teach others to see their privilege’.

During the session, instructors inform teachers that they will experience ‘guilt, anger, apathy [and] closed-mindedness’ due to their ‘white fragility’.

In addition to the aforementioned, the seminar also included a section on ‘land acknowledgement’.

According to Rufo’s article, he believes that teaching ‘white fragility’ will do nothing to help students improve their academic abilities.

He says ‘it will only serve activist teachers who want to shift the blame to “systemic racism”.’

A DailyMail.com request for comment to the San Diego Unified School District was not immediately returned Sunday afternoon.

Such trainings stem from the reckoning that the nation faced this summer over racial injustice in policing and other spheres of American life following the Memorial Day death of George Floyd, who died under the knee of a white police officer. 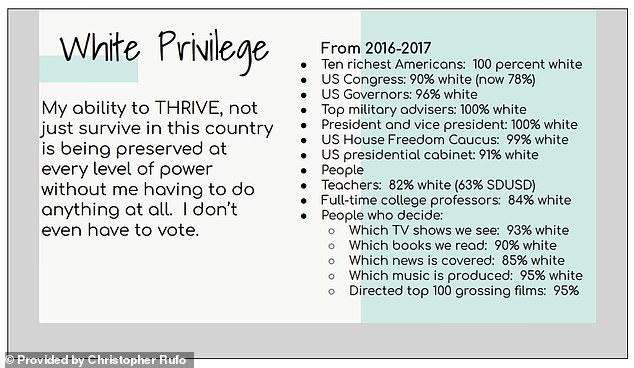 The Commander-in-chief said at the time that he wanted to cancel taxpayer funded seminars on ‘critical race theory’, describing them as ‘a sickness that cannot be allowed to continue’.

Systemic racism in America took center stage for discussions held on the local and national levels of government, including at the presidential and vice presidential debates.

At the first presidential debate, Trump said such training is ‘teaching people to hate our country’.

Ultimately, Joe Biden and Kamala Harris won the election, partly because they had 90 per cent of the black vote.

The NAACP Legal Defense Fund filed the complaint in federal court in Washington, DC, along with the National Urban League and the National Fair Housing Alliance.

The executive order ‘unconstitutionally forces Plaintiffs to choose between censoring speech on these important issues or forfeiting any opportunity to enter into a federal contract,’ the groups argued in the complaint. 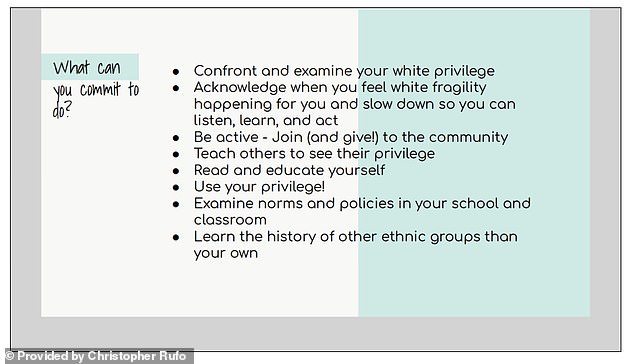 The president then ordered the Labor Department to set up a hotline to investigate complaints about training sessions.

The directive uses a 55-year-old presidential order spurred by the Civil Rights Movement that sought to ban discriminatory practices at companies that contract with the federal government.

The Labor Department is also using the 1965 presidential order to target companies, including Microsoft and Wells Fargo, over public commitments to expand or bolster black and Hispanic representation in leadership roles.

The government opened inquiries into both companies, warning them against using ‘discriminatory practices’ to meet their goals.

Cloris Leachman’s Cause of Death Revealed as Stroke, Coronavirus Also a Contributing Factor