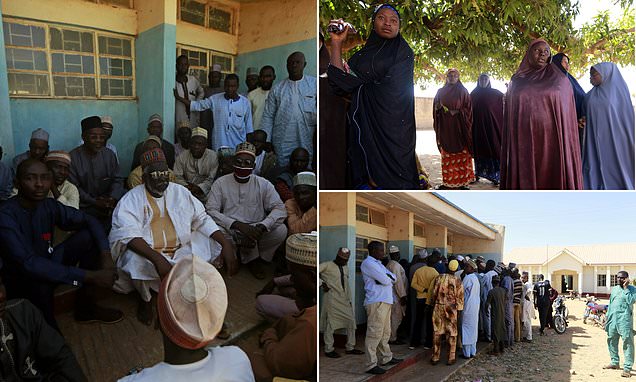 Desperate parents have gathered at a secondary school in Nigeria on Sunday, begging authorities to locate the hundreds of boys abducted from there by gunmen.

While exact figures are yet to be determined, more than 300 students from the all-boys Government Science school in Kankara in Nigeria’s northwestern Katsina state are thought to be missing after being taken by men reportedly armed with AK-47s on Friday night.

Abubakar Lawal travelled to the school from Zaria, a city 120 kilometres (75 miles) south of Kanara. Two of his three sons who attend the institution were among the missing.

‘From yesterday I was here, praying that the almighty Allah should rescue our people,’ he told Reuters news agency from outside the dusty school grounds.

One of his missing sons, 17-year-old Buhari, was named after President Muhammadu Buhari, a native of Katsina state.

Yahaya, a 17-year-old student, told Reuters he escaped on Saturday. He gave only one name for fear of reprisals.

He said he sneaked away while the kidnappers transferred students to different locations in a forest close to the school.

He added that group leaders told the men not to harm them.

President Buhari’s spokesman Garba Shehu issued a statement saying the military, supported by airpower, had located the bandits’ enclave in Zango/Paula forest in the Kankara area, and there have been exchanges of gunfire in an ongoing operation.

‘Our prayers are with the families of the students, the school authorities and the injured,’ said the president’s statement.

It did not say if any students have been rescued.