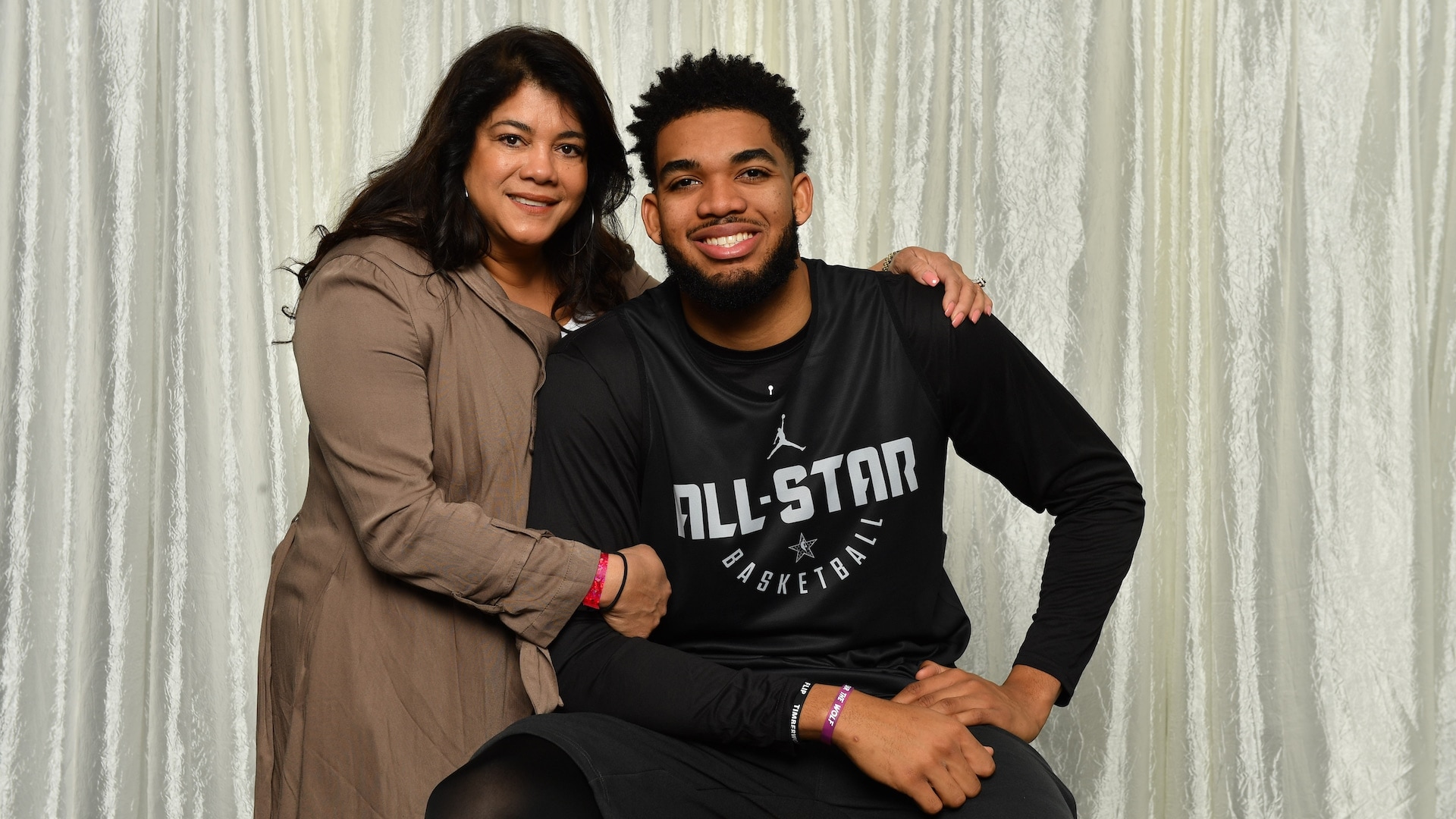 NBA star Karl-Anthony Towns revealed he has lost seven members of his family to COVID-19, including his mother who died as a result of the virus in April, stating that he has seen ‘a lot of coffins in the last seven months’.

Towns, 25, was speaking to ESPN about the upcoming NBA season, scheduled to tip off on December 22, and the difficulties it will present him amid his off-court tragedies.

‘I’ve been through a lot, obviously starting out with my mom,’ Towns said Friday.

‘Last night I got a call that I lost my uncle. I feel like I’ve been hardened a little bit by life and humbled.’

He did not say which other members of his family had passed away.

The 25-year-old said that he is still trying to process the death of his mother as he looks to protect the rest of his family from the ongoing pandemic.

His father, Karl Sr., also tested positive for coronavirus earlier in the year but has recovered.

‘I’ve seen a lot of coffins in the last seven months,’ Towns said.

‘I have a lot of people who have – in my family and my mom’s family – gotten COVID. I’m the one looking for answers still, trying to find how to keep them healthy.

‘It’s just a lot of responsibility on me to keep my family well-informed and to make all the moves necessary to keep them alive,’ he added.

Towns’ mom Jacqueline Cruz-Towns died on April 13 at the age of 58 after being placed on a ventilator for 19 days.

Towns had shared an emotional post on Instagram on March 25 in which he explained that she was on a ventilator and in a medically-induced coma as a result of COVID-19.

‘We need more equipment and we need to help those medical personnel on the front lines,’ he wrote with the video.

‘Thank you to the medical staff who are helping my mom. You are all the true heroes! Praying for all of us at this difficult time.’

Afterward, Towns donated $100,000 to the Mayo Clinic to help with testing patients for COVID-19.

Towns later confirmed her death with a touching video showing her by his side at games, press conference and TV appearances.

His mother had been a constant presence through all the large moments of his career, and was often highlighted by fans for her enthusiasm in supporting her son from the crowds.

The basketball star said that he felt compelled to share his mother’s story, detailing how he cared for her on social media, so others would better understand the impact of the pandemic.

‘I didn’t want people to feel the way I felt,’ Towns said.

‘I wanted to try to keep them from having the ordeal and the situation I was going through. It just came from a place that I didn’t want people to feel as lonely and upset as I was.

‘I really made that video just to protect others and keep others well-informed, even though I knew it was going to take the most emotionally out of me that I’ve ever been asked to do.’

Towns told ESPN that his teammates had been a major support as he grieved but that it will still be hard for him to get back on the court as it was rare that his mom would ever miss one of his games.

‘It always brought me a smile when I saw my mom at the baseline and in the stands and stuff and having a good time watching me play,’ Towns said.

‘It is going to be hard to play. It’s going to be difficult to say this is therapy. I don’t think [playing basketball] will ever be therapy for me again. But it gives me a chance to relive good memories I had.’

In a conference call with reporters on Friday, Towns also became emotional when speaking about George Floyd and the protests that followed his death while being kneeled on by a white police office on Memorial Day.

The former Kentucky Wildcats player revealed that he initially stayed at home as it came just over a month after the passing of his mother but said he soon felt compelled to join the protests as he ‘knew my mom would’ve wanted me to be there; she would’ve given me the push and motivation to go.’

He said that she had always pushed him to stand for causes he believed in.

‘The first time being outside was difficult emotionally and mentally. But I knew I had to go. I knew I had to make my voice heard at a time it wasn’t convenient. Doing the right thing is usually the hardest thing to do in the world today.’

Towns is preparing for his sixth season with the Minnesota Timberwolves.

He has not played an NBA game since February after injuring his wrist during a game against the Toronto Raptors on February. He remained out of play until the season was suspended in mid-March due to the pandemic.

While the 2020 season did restart in July, the Timberwolves did not have a good enough record to join the bubble the NBA created in Orlando, Florida, for games to be played.

Towns pledged to become the Timberwolves leader ‘on and off the court’ but says he is constantly focused on maintaining the league’s coronavirus safety protocols to ensure that his family remains healthy.

The NBA revealed Wednesday that 48 players – about 9 percent of the league – have tested positive for coronavirus since screenings began last week ahead of the December 22 opener.

The league and National Basketball Players Association said 546 players were tested between November 24-30 in the initial phase of screening after returning to team markets.

Any player with a confirmed positive test is isolated until cleared by rules established by the league and union, in accordance with CDC guidance.

The NBA had no players test positive once they entered the bubble at Walt Disney World for the season restart last July. A very small number of individuals tested positive after arriving at Disney but before they were released from quarantine and into the bubble – a sign that the NBA pointed to as proof that its system worked.

Most NBA teams will be operating without fans to begin the 2020-21 season, given the nationwide rise in infections.

On Monday, National Institute of Allergy and Infectious Diseases director Dr. Anthony Fauci told Yahoo! Sports that fans should not expect to return to games en masse until the final months of 2021 due to the challenges of rolling out COVID-19 vaccines.

As of Saturday morning, there have been more then 14.3 million coronavirus cases in the US and almost 280,000 deaths.