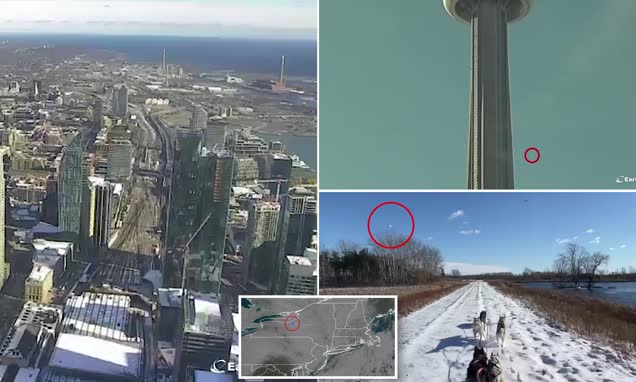 A large meteor was seen in parts of the northeastern United States and southern Ontario as dramatic images captured on social media show an intense flash that lit up the afternoon sky and created a loud boom that shook the ground. The American Meteor Society reported some 150 sightings from residents who saw the fireball over parts of Maryland; Washington, DC; Virginia, Pennsylvania; New York; Ontario; and Michigan on Wednesday. Satellite imagery from the National Oceanic and Atmospheric Association (inset) shows the meteor entering the Earth’s atmosphere over central New York State in the region that lies between Rochester and Syracuse. Bill Cooke, the head of NASA’s Meteoroid Environment Office, told NBC News that the meteor was traveling west at 56,000mph at around 12:08pm Eastern time when it entered our atmosphere. It then broke into pieces some 22 miles above the surface of the Earth over Central New York, creating a sonic boom. The meteor was seen from Royalton, New York (bottom right) as well as from downtown Toronto (left and top right).