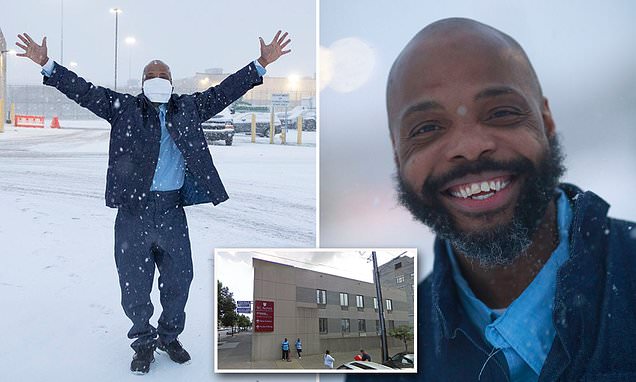 An innocent Philadelphia man has been freed after spending 19 years in prison because two police officers wrongly claimed he’d raped a woman and then shot at them, when he’d in fact saved her from a different man.

Attorneys for Termaine Joseph Hicks claim cops made up the story of him shooting at them – and even planted a gun on him that was owned by another officer.

Hicks, now 45, was near the St. Agnes Hospital in South Philadelphia in the early hours of Nov. 27, 2001 when he heard a woman screaming.

She was walking to an early shift at a Dunkin’ Donuts when she was pistol-whipped and dragged into an alley by a man who raped her.

Hicks – who was working at the time as a Popeye’s assistant manager – ran to the alley to help.

The rapist, startled by headlights from a delivery van nearby, ran off and Hicks says that is when he arrived.

But when cops Marvin Vinson and Dennis Zungolo arrived second later, they presumed he had attacked the woman and shot at him.

They then claimed that Hicks had opened fire on them and that they shot him in self-defense.

He was convicted of rape, aggravated assault, possessing an instrument of crime, and terroristic threats, and was sentenced to 25 years behind bars.

His conviction came even though the woman could not identify her attacker at trial and had suffered a head injury.

Hicks was eligible for parole in 2015, but it was denied because he continued to assert his innocence.

This week, however, after a review of his case, his conviction was overturned by the Conviction Integrity Unit in the Philadelphia District Attorney’s Office.

The head of that unit said that ‘false testimony’ was to blame for it.

‘False testimony was used, and I believe it’s impossible to say that did not contribute to the conviction,’ CIU chief Patricia Cummings said.

Among the reasons for the decision was that the cops’ story was not consistent with Hicks’ injuries – he was shot in the back – and there was no reliable security footage to determine exactly what happened.

Hicks’ attorneys also say that he never shot at the police.

They claim the officers made that part of the story up to justify shooting at him, and that they even planted a gun on him.

The weapon was registered to another Philadelphia cop who’d never reported it missing.

Hicks’ lawyers say the fact there was blood from the woman found on the gun but not on the interior of Hicks’ jacket, where the cops say he pulled it from, proves they were lying.

Officers also falsely claimed under oath that Hicks wore a gray hoodie, like one that the attacker was seen wearing, even though a hoodie was not among Hicks’ clothes following his arrest.

Hicks was freed from prison on Wednesday. It’s unclear whether he now plans to sue the police department.