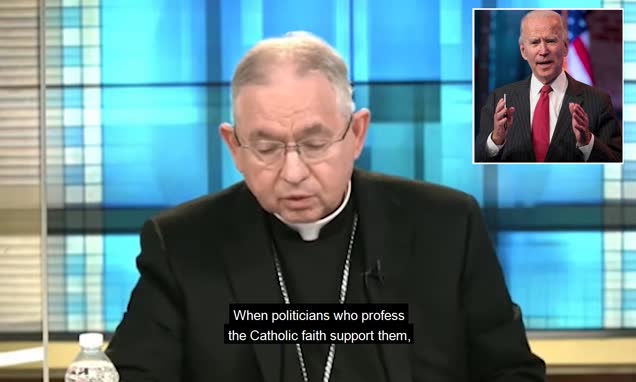 Some Roman Catholic leaders are voicing their concern that President-elect Joe Biden would enact policies that would create ‘confusion’ about what the Church teaches.

In a November 17 virtual meeting for the United States Conference of Catholic Bishops, Los Angeles Archbishop Jose Gomez shared that a group was being formed to respond to some of the worries the leaders had towards Biden, who would become the second practicing Catholic to be president.

‘The president-elect has given us reason to believe that his faith commitments will move him to support some good policies. This includes policies of immigration reform, refugees and the poor, and against racism, the death penalty, and climate change,’ Gomez, who is president of the USCCB, said towards the end of the Tuesday session.

‘He has also given us reason to believe that he will support policies that are against some fundamental values that we hold dear as Catholics. These policies include: the repeal of the Hyde Amendment and the preservation of Roe vs. Wade. Both of these policies undermine our preeminent priority of the elimination of abortion.’

Gomez continued to cite various policies and agenda items he and the other leaders were alarmed over, including ‘the restoration of the HHS mandate’ and ‘the passage of the Equality Act.’

‘These policies pose a serious threat to the common good,’ Gomez said. ‘Whenever any politicians supports them.’

Gomez asserted that the Catholic Church has long opposed those policies and ‘will continue to do so.’

‘When politicians who profess the Catholic faith support them, there are additional problems,’ he declared. ‘It creates confusion with the faithful about what the church actually teaches on these questions.’

The sentiment was shared by CatholicVote.org, a conservative nonprofit that ran an intense anti-Biden campaign prior to the election and has also pushed forward Trump’s unsubstantiated claims about election fraud.

‘CatholicVote fully agrees with @USCCB President Abp. Gomez’s assessment that many of Joe Biden policies creates “confusion among the faithful” and “pose a serious threat to the common good,’ the group said in a Thursday thread.

‘Should Biden be officially elected, his administration has outlined plans to slash pro-life policies protecting unborn lives, unlock millions for abortion services, and overturn religious freedom protections for religious organizations like the Little Sisters of the Poor.

‘These plans and policies represent a radical anti-life, anti-Catholic agenda in clear and direct conflict with Catholic social teaching and the values that Catholics rightly prioritize.’

Bishop Joseph Strickland of Tyler, Texas, also begged Biden to ‘repent’ for straying from Catholic teachings in his endorsement of policies regarding abortion and marriage.

‘He aspires to the highest office in our land & must be guided by the truth God has revealed to us,’ the bishop said. ‘I pray for him to find Truth.’