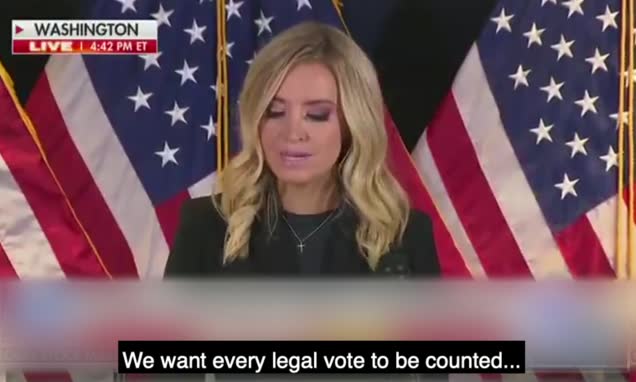 The conservative network refused to air the remainder of the Trump administration’s press briefing after McEnany (pictured) made a series of baseless claims. McEnany insisted the election is ‘not over’ and that Republicans had ‘only begun the process of obtaining an accurate, honest vote count’. She then launched into a string of claims, including that the Democrats oppose voter ID laws and stopped GOP poll observers watching ballots being counted. ‘You take these positions because you are welcoming fraud and you are welcoming illegal voting,’ she said. Fox News host Neil Cavuto cut across her saying ‘unless she has more details to back that up, I can’t in good countenance continue to show you this’. Cavuto said the network would return to the conference if McEnany presented any evidence ‘but that’s an explosive charge to make’. This comes after at least seven television networks cut off Trump’s White House address Thursday evening to call out his ‘falsehoods’. It also marks the latest move from Rupert Murdoch’s media empire, a former close ally of the president, to distance itself from Trump.