Donald Trump is said to be considering holding an event during the president-elect’s inauguration to announce his 2024 run and has boasted that he thinks the networks will continue to cover him after he leaves the White House because Joe Biden is ‘boring’.

Three sources close to the president told The Daily Beast he is plotting various ways to boycott Biden’s administration and steal his thunder when he is sworn in as the 46th president of the United States in January.

Two of the sources said Trump is considering timing a kick-off event for his 2024 White House campaign to clash with inauguration week or with the ceremony itself.

This would be a marked departure from protocol with the outgoing president traditionally attending the incoming president’s inauguration as part of a peaceful transition of power – a grace then-President Barack Obama and Vice President Biden both afforded Trump back in 2017.

It comes as Trump took a break from his election legal battle over Thanksgiving weekend to play a round of golf at his club in Sterling, Virginia, Saturday for the second day in a row.

He saluted and sported a ‘MAGA hat’ as he disembarked Marine One at the Trump National Golf Club, with his sons Eric and Don Jr. and Don Jr.’s girlfriend Kimberley Guilfoyle in tow.

Don Jr. on Wednesday claimed he was ‘cleared’ of COVID-19 in time for Thanksgiving, despite only announcing his infection the Friday before.

The Trump family celebrated the Thanksgiving holiday at Camp David with all the president’s adult children pictured at the presidential retreat Friday ahead of their father flying in after his golf game. It is not clear if Barron and First Lady Melania Trump joined them.

The president continues to refuse to publicly concede the election to Biden but finally showed signs of caving this week, when he admitted he would leave the White House in January if the electoral college approves his rival’s votes.

In another sign he may be coming to terms with his election defeat, the sources told the Daily Beast Trump is already planning for his comeback run for the 2024 White House race.

They said the president is in close talks with advisers on specifics including the timing of its launch in efforts to continue to keep the spotlight firmly on him and away from his Democrat successor.

Trump allegedly boasted to his aides that he is confident he will continue to stay in the public eye and the media will continue to provide him coverage because he said Biden is ‘boring’ and doesn’t bring in the ratings he does, two of the sources said.

His plot to draw the attention away from inauguration day on January 20 would be a dramatic disregard for the process of a peaceful transition of power from one president to the next.

On 20 January 2017, when Trump was sworn in to the Oval Office, Obama and Biden were in attendance with their wives and the administration tried to create a smooth transition to Trump in the lead-up.

Former presidents Jimmy Carter, Bill Clinton and George W. Bush also attended with their spouses – including Hillary Clinton, who had lost to Trump in the 2016 election. 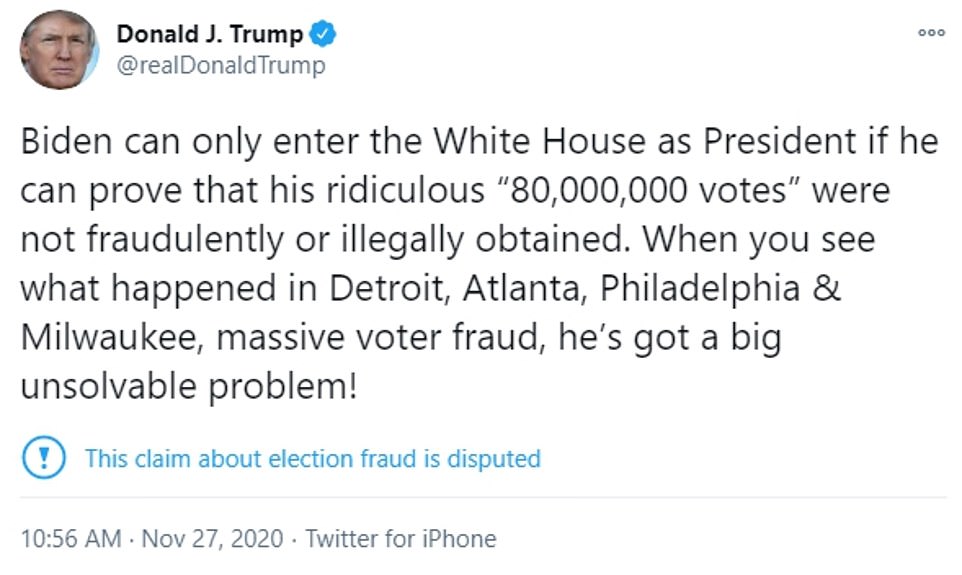 Obama gave his successor a handwritten letter – a tradition carried out by a handful of other presidents – congratulating Trump and offering his advice and support for his coming term.

‘Congratulations on a remarkable run. Millions have placed their hopes in you, and all of us, regardless of party, should hope for expanded prosperity and security during your tenure,’ he wrote.

Obama wished Trump ‘the very best as you embark on this great adventure’ and said he and Michelle ‘stand ready to help in any ways which we can’.

Michael Brown on The Biden Administration, the Worst-Case Scenario and How We Should Respond