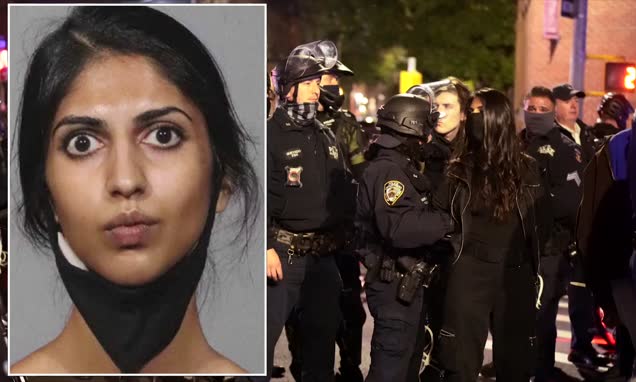 An anti-Trump protester has been arrested and charged in New York City after spitting in a police officer’s face as demonstrators gathered in cities across the country with the outcome of the presidential election still uncertain.

Devina Singh, 24, was among the 57 people arrested in New York City on Wednesday night after she was filmed in Manhattan’s West Village neighborhood screaming ‘f**k you fascist’ at an NYPD officer before spitting in his face.

Footage of her spitting at the officer, which went viral on Twitter, was immediately condemned by the NYPD and police unions.

‘Actions like this will not be tolerated. Agitators who commit these acts will be arrested,’ the NYPD tweeted alongside the video.

NYPD detectives union the Detectives’ Endowment Association added: ‘This despicable behavior won’t be tolerated! This after setting fires & destroying property. We know law abiding NYers don’t want their cops treated like this. Now we need every elected official to publicly condemn it.’

After spitting at the officer, Singh was thrown to the ground and arrested.

Singh, who is originally from Schwenksville, Pennsylvania but believed to live in New York, was charged with obstruction of governmental administration and harassment.

She was arrested for unlawful assembly during a protest in Downtown Brooklyn on October 27. Singh was also arrested for resisting arrest and obstruction on September 18 during protests in Manhattan.

Following Wednesday’s arrest, Singh deleted her social media accounts where she has been an advocate for the BLM movement and often criticized the NYPD.