Toilet paper, disinfectant and groceries are once again flying off the shelves across the United States with states forced to impose stricter lockdowns and the number of new COVID-19 cases spiking to 166,000 Monday.

Pictures taken in recent days show stores in Washington, California, Virginia, Indiana, Ohio, New Jersey, New York, Michigan and Missouri have all been affected by the rush. It is the second time this year that shoppers appear to be panic buying; stores were left scrambling to restock shelves wiped out in response to COVID-19 back in March.

But experts say the run is likely to be less severe this time as stores and shoppers are more prepared. Subodha Kumar, a supply chain expert at Temple University, told The Daily Beast: ‘People have already hoarded a lot of this stuff in their basements.’

A new flurry of lockdown measures came as 40 states reported record daily increases in COVID-19 cases this month, while 20 states have registered all-time highs in daily coronavirus-related deaths and 26 reported new peaks in hospitalizations, according to the Reuters tally. The nation as a whole has averaged more than 148,000 new cases a day, and 1,120 daily deaths, over the past week.

Several governors, from New Jersey and California to Iowa and Ohio, acted on Monday to restrict gatherings ahead of Thanksgiving and boost face-coverings in confronting a coronavirus surge they warned is out of control.

Each of the four governors cited health data showing the pandemic reaching its most perilous point yet in the US, threatening to overwhelm hospitals and claim thousands more lives in the weeks ahead.

As they acted there were local reports of panic buying beginning in stores across the country.

The virus is blamed for more than 246,000 deaths and over 11 million confirmed infections in the the U.S. Thanksgiving was on the minds of leaders nationwide as they enacted tougher restrictions amid fears that the holiday will lead to more infections.

In Virginia ABC8 News reports some large chains, including Kroger and Walmart, are already experiencing the second wave of panic buying.

One local store owner Norm Gold told the network: ‘There will be a second rush. I am very confident in my store and what we have now. They learned from what happened six months ago and they brought product in early.’

Target told the network they will enforce purchase limits if necessary.

Earlier this year grocers were forced to limit purchases of products like Purell sanitizers, Lysol cleaning spray and canned soup. Companies like Walmart, Target and Wegman’s curbed store hours for the public in order to give workers time to restock shelves.

The number of new COVID-19 cases in the United States spiked to 166,000 Monday as hospitalizations nationwide surged to a record high of 73,000.

Deaths are still trending upwards nationally with the number of Americans dying of COVID-19 increasing by 12 percent in the last week. The daily death toll, which was just shy of 1,000 fatalities yesterday, is still well below the peak 2,500 deaths recorded in April during the initial peak of the virus.

The US has recorded more than 1 million new COVID-19 cases in the last week alone as new infections rose in every state except for Hawaii. It marks the fastest time it has taken for the national tally to grow by a million cases throughout the pandemic. 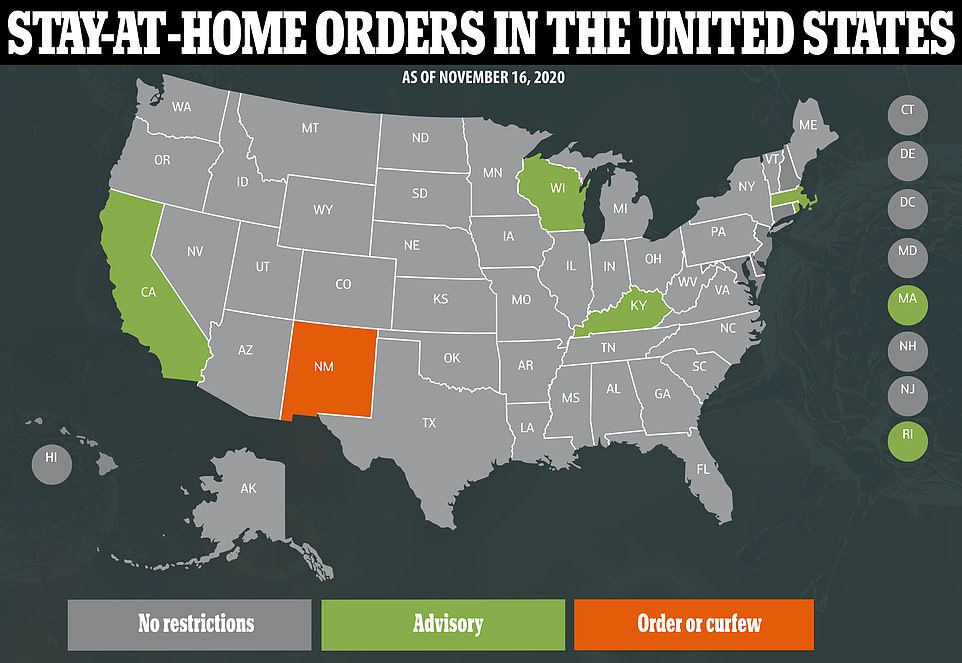 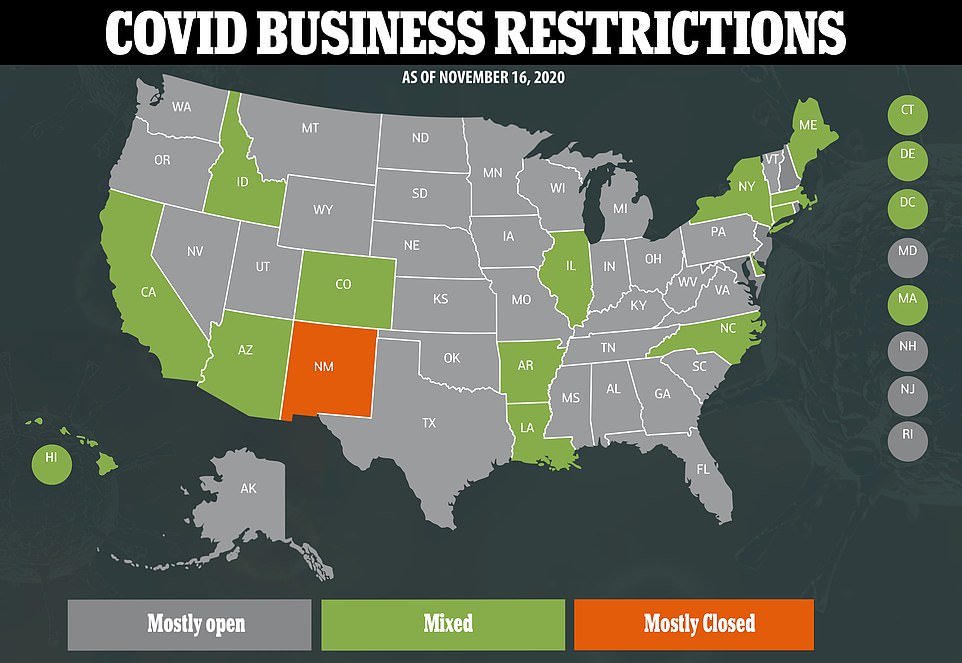 In Indianapolis pictures show empty shelves as shoppers gear up for the Holidays. Shopper John Notarianni told WTHR:’I have a pantry and my freezer full. I figure I have enough food at home to last me through January.’

Kroger spokesperson Eric Halverson said: ‘We learned a lot about our supply and demand last May and April during the start of the pandemic. The key is for us to make sure people don’t panic and don’t hoard. There is plenty of food in the supply chain.

‘What we learned was we didn’t impose product restrictions early enough and that created a run on the system and created some difficulties for people.’

Health experts have projected the coming holiday travel season and the onset of colder weather, with more people tending to congregate indoors, is likely to worsen the situation.

“Thank God and thank you for your presence”; Pope Francis back to in-person Sunday blessing