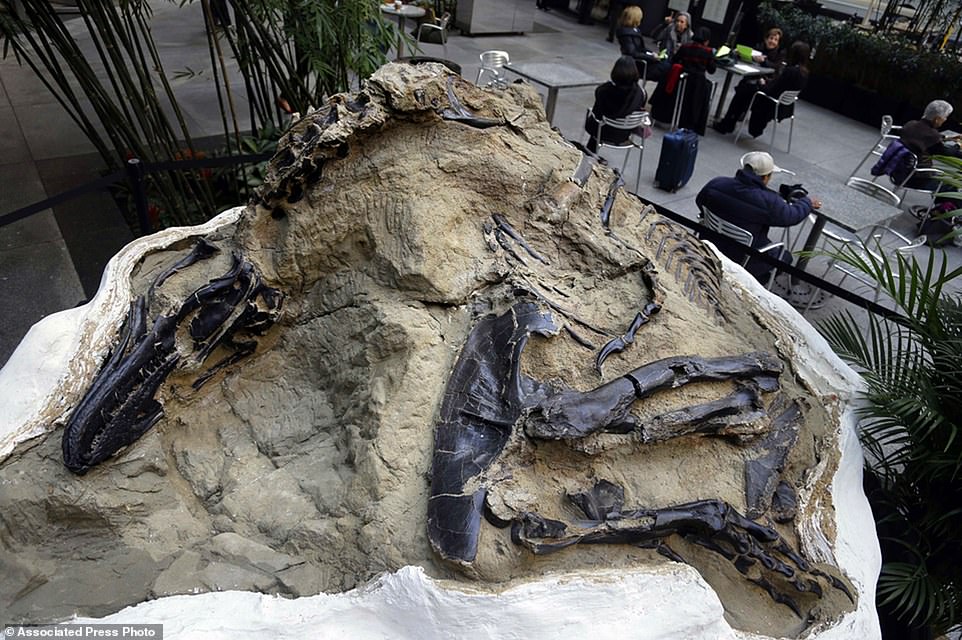 The world’s first ever complete T-rex skeleton, which became buried in sediment after a deadly duel with a Triceratops 67 million years ago, has been revealed by scientists.

The Tyrannosaurus rex and Triceratops horridus – nicknamed the ‘Dueling Dinosaurs’ – are preserved together in what is thought to be a predator-prey encounter, where both fought to the death.

Body outlines, skin impressions and injuries – including Tyrannosaur teeth stuck in the Triceratops’ body – can still be seen 67 million years after the ferocious battle.

Each of the remains have only been seen by only a few dozen people since they were discovered in 2006 in Montana, US, by professional fossil hunters.

It took years to extract the 14-ton skeletons and arrange their purchase, by the non-profit Friends of the North Carolina Museum of Natural Sciences for an undisclosed sum.

The group has donated them to North Carolina Museum of Natural Sciences, in Raleigh, North Carolina, which is due to start building a dedicated exhibition for them next year.

The Dueling Dinosaurs, which have not yet been studied, have been described as ‘one of the most important paleontological discoveries of our time’.

‘This fossil will forever change our view of the world’s two favourite dinosaurs,’ said Dr Lindsay Zanno, head of palaeontology at the North Carolina Museum of Natural Sciences.

‘The preservation is phenomenal, and we plan to use every technological innovation available to reveal new information on the biology of the T. rex and Triceratops.

‘We have not yet studied this specimen – it is a scientific frontier.’

The T-rex includes the only 100 per cent complete T-rex ever found – even better preserved than Sue, housed at the Field Museum of Natural History in Chicago, Illinois.

‘Dueling Dinosaurs’ tyrannosaur is a young individual, not yet fully grown,’ Dr Zanno told MailOnline. ‘By comparison Sue is a large, skeletally mature individual of T-rex.

The ‘dueling’ tyrannosaur also has skin impressions – fossilised remains of skin surfaces – which are extremely rare.

‘There is not, to my knowledge, evidence of skin preservation on Sue,’ said Dr Zanno.

The Dueling Dinosaurs’ carcasses have remained entombed within sediment from the Montana hillside where they were discovered by the professional fossil hunters – a cattle rancher and two of his friends.