Excited fans of The Crown have revealed their plans to spend the day bingeing the show as the fourth season premiered on Netflix this morning.

The streaming service unveiled ten new episodes of Peter Morgan’s hit royal drama at 8am this morning, with viewers already taking to Twitter to share their reaction to the drama.

Season four of The Crown covers the span of time from 1977 to 1990 and sees Gillian Anderson’s Margaret Thatcher joining Olivia Colman’s Queen Elizabeth in the show for the first time.

And it seems fans are already hooked, with several revealing their plans to stay in all day and binge watch the show, and many heaping praise on Sex Education star Gillian, 52, for her stellar performance as Thatcher. 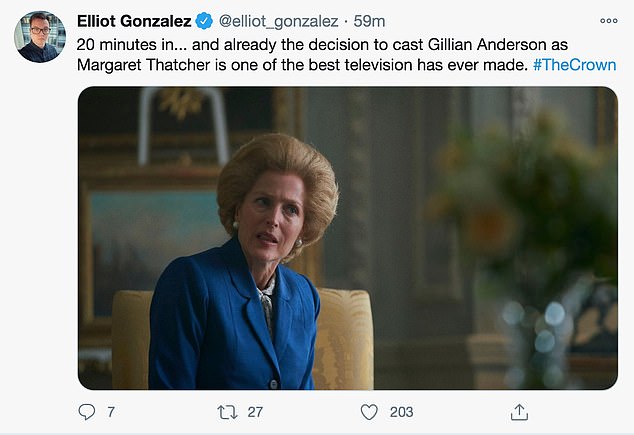 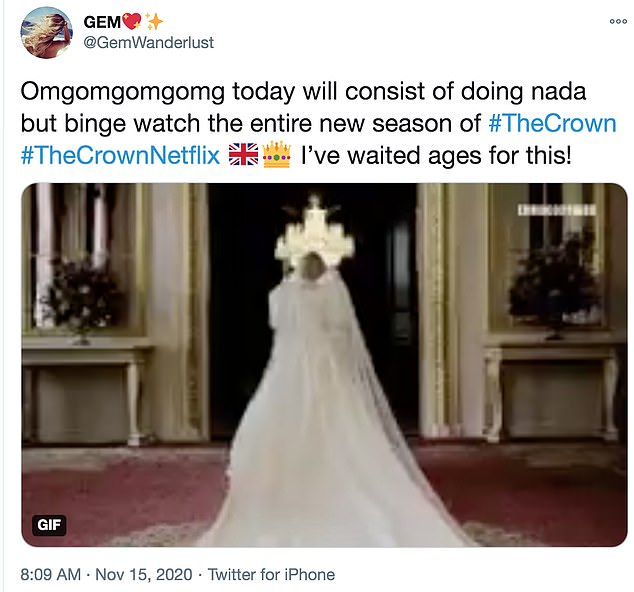 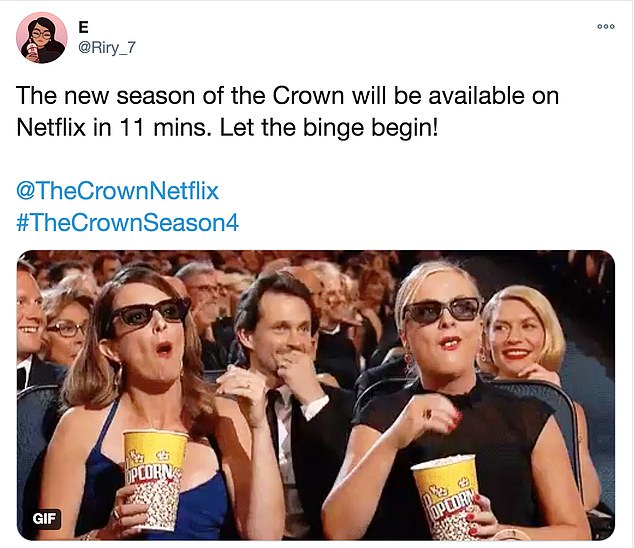 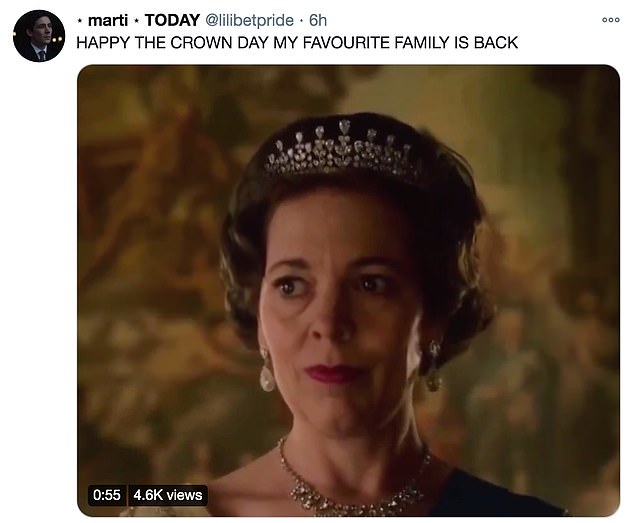 One wrote: ‘Staying in my pyjamas all day with lots of yummy treats whilst I binge series 4 of @TheCrownNetflix’.

‘Great to start Sunday morning to watch the new series of the Crown. Binge watching beware today!’ said another.

‘@GillianA absolutely fantastic portrayal of #Thatcher. Loving the interactions with the Queen #TheCrown Will undoubtedly binge!’ commented a third.

Another user admitted: ’20 minutes in… and already the decision to cast Gillian Anderson as Margaret Thatcher is one of the best television has ever made.’

The new season begins as the 1970s are drawing to a close, with the Royal Family preoccupied with safeguarding the line of succession by securing an appropriate bride for Prince Charles who is still unmarried at 30.

It will document Diana’s blossoming romance with Prince Charles, meanwhile the British nation is struggling with the impact of the divisive policies introduced by Britain’s first female Prime Minister Margaret Thatcher.

Tensions between the Prime Minister and the Queen are expected to only get worse as Thatcher leads the country into the Falklands War, generating conflict within the Commonwealth.

Morgan’s hit show will portray the pair as ‘twins who are not the same’, its creator revealed ahead of the show’s release.

He said learning the monarch and politician were born just six months apart was ‘a breakthrough’ for him when writing the fourth season of the hit Netflix programme.

Speaking to Vanity Fair, Peter explained he had found many similarities between the two women, saying: ‘They’re both very resilient, very committed, work incredibly hard, have an extraordinary sense of duty. They’re both really committed to the country.

‘They both have a strong Christian faith. They’re both girls of the war generation who switch the lights off when they leave a room.’

The show will also follow Princess Diana’s heartbreaking battle with bulimia, with actress Emma Corrin, 24, vomiting after eating in scenes.

But it is unlikely Prince Harry will criticise the scenes after he and wife Meghan Markle signed a commercial deal with the streaming giant, thought to be worth some £75million.

Production company Left Bank Pictures said that eating disorder charity BEAT were on hand to ensure any portrayal was correct and sensitive.

Royals William and Kate Had to Ax First Stop in Belize to Kick-start Commonwealth Tour Because Villagers Staged ‘Colonialism’ Protest Over Plan to Land...

‘The largest Confederate monument in the South is coming down’: Virginia’s Supreme Court rules that Robert E Lee statue in Richmond can be toppled