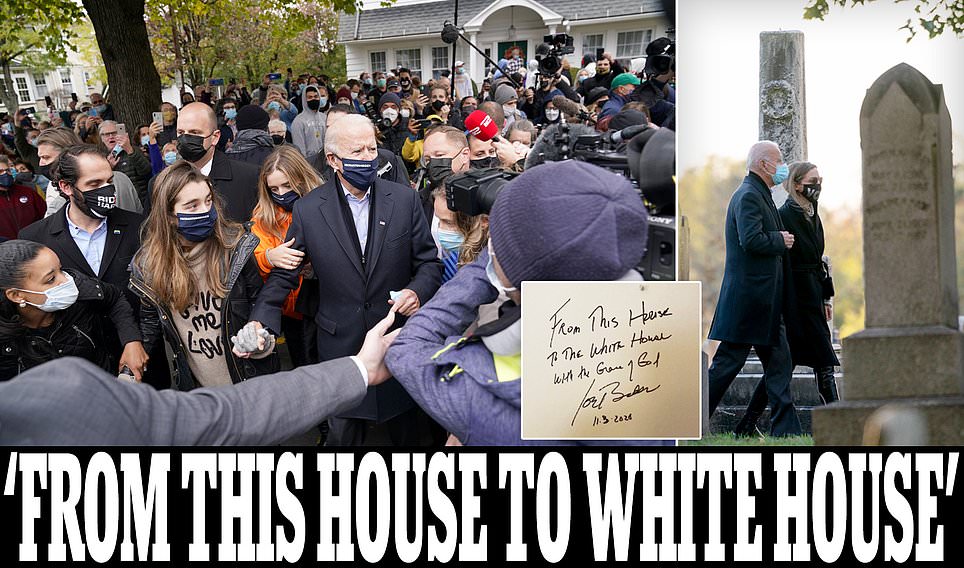 Joe Biden visited his childhood home in Scranton, Pennsylvania, Tuesday morning where he left a poignant message on the wall, before being mobbed by fans in the battleground state. The Democratic candidate scrawled the message ‘from this house to the White House with the grace of God’ alongside his signature and the date of the 59th US presidential election on the wall of the living room to his boyhood home, as he stopped in the town just hours before the polls close. Biden was then mobbed by dozens of supporters who had gathered outside in a show of support, as he headed for the next stop on his whistlestop tour of the state. Biden is making appearances across two Pennsylvania cities Tuesday as he makes a final play for the battleground state where pollsters and both political parties feel the White House race could be won or lost. The trip came after he started election day by attending morning mass and visiting Beau’s grave at St. Joseph On the Brandywine Catholic Church in Wilmington, Delaware, with his wife Jill and teenage granddaughters Finnegan and Natalie, pictured left next to Joe and right, Finnegan with Joe.

Wallace B. Henley on A Conservative Christian and Joe Biden

Joe Biden is seen for first time with surgical boot and says he’s feeling ‘good’ after fracturing his foot playing with his German Shepherd...