President Donald Trump raged at the Supreme Court Friday after it ruled officials in Pennsylvania and North Carolina could count mail-in ballots which arrive after the election, arguing the election should end on November 3.

‘This decision is CRAZY and so bad for our Country. Can you imagine what will happen during that nine day period. The Election should END on November 3rd,’ he tweeted.

That was after a similar tweet sent just before 3am accusing the Supreme Court of helping Biden to victory – which he called ‘ridiculous.’

Voting does end on November 3. But ballot counting can go on for several days depending on turn out and how late voting went. Legally, states have to let anyone who is in line to vote by poll closing time cast their ballot.

Complicating matters this year is the high number of mail-in ballots due to the coronavirus pandemic. Many states are accepting ballots as long as they are postmarked by Election Day – meaning the tabulation of results could go on for several days.

The Supreme Court has allowed those extended deadlines in North Carolina and Pennsylvania – both of which Trump sees as crucial to his victory. Republicans believe Democrats are more likely to vote by mail, so restricting numbers of late-arriving ballots is likely to favor them – meaning the SCOTUS rulings are seen as victories for Joe Biden. 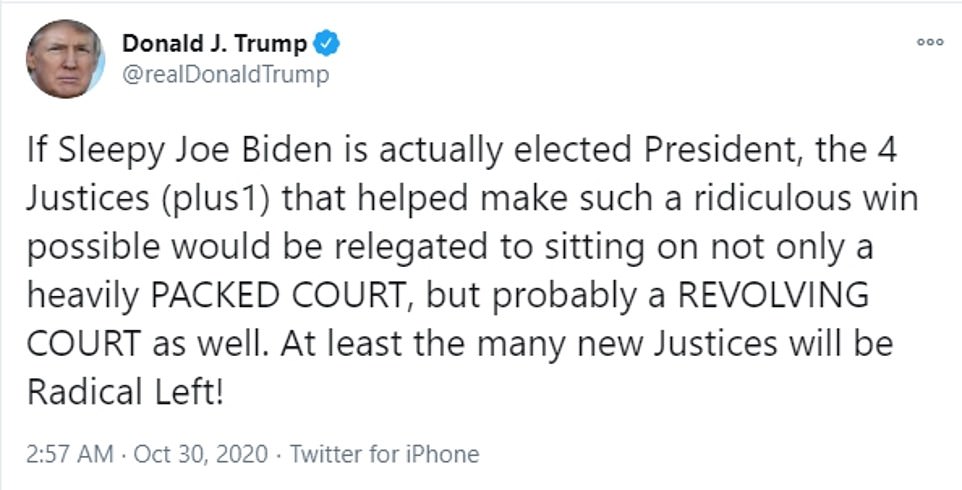 Republicans, particularly the president, are infuriated by the extended deadlines and are suing in several states to stop them.

Trump also warned Biden would pack the Supreme Court with more justices in a 2 am tweet rage that claimed his rival ‘will destroy the United States Supreme Court.’ The Democratic nominee said he would appoint a national commission to study the court system should he win the White House.

‘If Sleepy Joe Biden is actually elected President, the 4 Justices (plus1) that helped make such a ridiculous win possible would be relegated to sitting on not only a heavily PACKED COURT, but probably a REVOLVING COURT as well. At least the many new Justices will be Radical Left!,’ the president wrote.

His early morning tweet storm – which also predicted a ‘red wave’ of Republicans wins – came after the president spent the day campaigning in Florida and North Carolina. On Friday he’ll campaign in Michigan, Wisconsin, and Minnesota.

The Supreme Court on Wednesday left in place extensions of North Carolina and Pennsylvania’s deadlines for receiving mail-in ballots.

The ruling was a big victory for Democrats as it will allow mail-in ballots to be counted past November 3 as long as they are post-marked by Election Day.

Both states are critical for a White House win. Trump will spend Saturday holding three rallies in Pennsylvania. Biden was there Monday. Trump’s Thursday rally in North Carolina was canceled due to bad weather. He’s rescheduled it for this Monday.

Biden will campaign in Pennsylvania on Sunday. On Monday, he, Jill Biden, running mate Kamala Harris and Doug Emhoff will spend the day barnstorming the state.

Republicans have received victories of their own in the rash of lawsuits both parties have implemented as record numbers of Americans use mail-in ballots during the coronavirus pandemic.