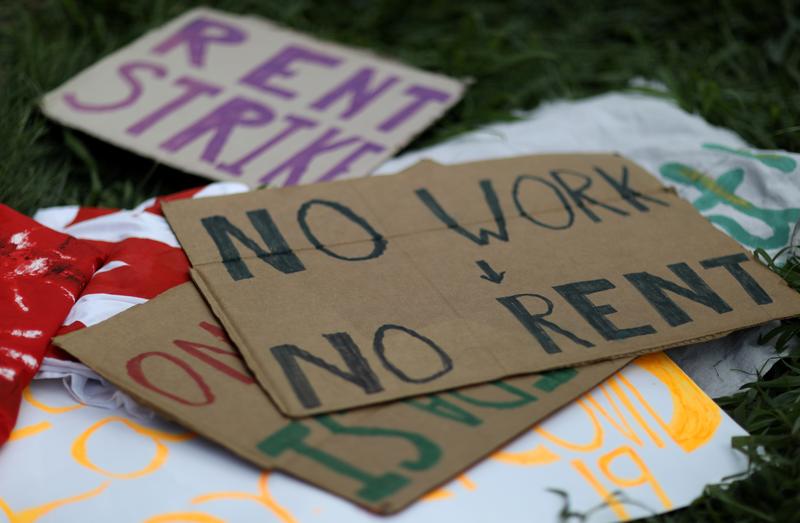 On Sept. 1, U.S. health officials announced they would suspend evictions across the United States to help stem further spread of the novel coronavirus.

That was three days too late for Latrise Bean.

About 72 hours before the declaration by the U.S. Centers for Disease Control and Prevention (CDC), Bean, 35, was ordered evicted from her Milwaukee apartment. She’d lived there for three years despite the sagging ceilings, smell of urine in the hallways and homeless squatters in the basement – because it was all she could afford.

Bean, whose hours as a fraud specialist at a software company had been cut due to the pandemic, tried to find a new place. But with the eviction on her record, landlord after landlord rejected her. She is now sharing an air mattress with her 5-year-old daughter, in a temporary unit in a neighborhood even worse than the one she left behind.

“I feel so unlucky,” said Bean. “I have really been through it.”

It has been a nightmare year for many of America’s renters. The local, state and federal eviction bans that gave them temporary protection in the spring began to lapse in early summer – ensnaring renters like Bean in the gap. September’s reprieve by the CDC, which protected many, but not all, renters will expire in January.

At that point, an estimated $32 billion in back rent will come due, with up to 8 million tenants facing eviction filings, according to a tracking tool developed by the global advisory firm Stout Risius and Ross, which works with the nonprofit National Coalition for a Civil Right to Counsel. The nonprofit group advocates for tenants in eviction court to secure lawyers.

Landlords, most of whom are mom-and-pop operators with mortgages to pay, say they, too, are under unprecedented financial strain, as many move into the eighth month of nonpayment. Many owners are “not generating sufficient revenue,” said Bob Pinnegar, CEO of the National Apartment Association. “This is not a high-profit-margin business.”

“Only 9 cents of every dollar return to the owner or investor as profit,” he added.

Unless Congress and the Trump administration move past their deadlock over the contours of a new COVID-19 relief package and include financial relief for tenants and landlords, January will bring a surge in displacement and homelessness “unlike anything we have ever seen,” said John Pollock, a Public Justice Center attorney and coordinator of the National Coalition for a Civil Right to Counsel.

The Democrat-controlled House passed a relief package that included $50 billion in emergency renter and homeowner assistance funds and a new ban on evictions and foreclosures for 12 months; the Republican-controlled Senate’s proposal contains no similar provisions.

More than 60,000 evictions have been filed since the pandemic started in the 17 cities tracked by the Princeton Lab. Health experts say evictions may contribute to a second-wave COVID-19 crisis, as the newly homeless are forced into shelters or tight quarters with friends and relatives, potentially exposing them to infection. The danger is particularly acute in the winter, when colder weather pushes people indoors.

Though eviction filings in many cities dipped considerably in the wake of the CDC’s temporary ban, they haven’t stopped completely. In some places – like Columbus, Ohio, Jacksonville, Florida and Gainesville, Florida – landlords are filing roughly as many eviction proceedings as they were before the CDC measure. In Richmond, Virginia, for example, there were 152 evictions filed the week of Oct. 4, well over the amount filed weekly during July.

That’s because the CDC order is open to interpretation by judges and still leaves plenty of room for landlords to evict, by saying, for example, that a tenant violated the terms of a lease, engaged in criminal activity or didn’t abide by a stipulated payment plan. At least 25% of renters with small children are unable to pay their rent, according to the most recent U.S. Census Bureau survey, completed September 28.

Meanwhile, on Oct. 9, the administration of President Donald Trump announced policy guidance that property owners are free to start the eviction process while the federal moratorium is active. It also stipulated that landlords are not mandated to make tenants aware that the eviction ban exists.

The CDC reprieve was just that. Come January, renters will owe back rent.

Natasha Burns, whose hours at a Ross clothing store in north Milwaukee were cut due to COVID-19, owes more than $7,000 to her landlord, not including late fees and penalties. She has no idea how she will cover it.

“If it weren’t for the CDC ban, my kids and I would be homeless,” Burns said.

In Milwaukee, as in many cities, landlords are allowed to garnish up to 20% of an evicted tenant’s wages to claw back what’s owed. Judgments ordering payment of back rent can haunt tenants for years, because they carry interest rates of 12% percent and can attach to a tenant’s credit report. If they should ever come to own property, the landlord can attach a lien.

Joblessness, sickness, loss of a spouse – none of life’s calamities are a defense for eviction. Nor is a global pandemic, says Nick Toman, a weary and gravelly voiced Milwaukee Legal Aid lawyer.

Toman said he noticed a distinct change in his normal clientele in the COVID-19 era. The people reaching out weren’t individuals. They were families.

“I hear these stories from entire families who are on the side of the street,” said Toman, choking up during an interview with Reuters in his Milwaukee office. “These families have no place to go and no options, and I think it’s abundantly clear that the safety net is just not big enough to handle something like this.”

One client was so distraught he spoke of suicide, Toman said.

Though eviction filings have slowed since the CDC ban, Toman said he and other housing defense lawyers in Milwaukee are dreading the looming crush of cases.

“January is going to be a mess,” he said. “Nobody can get a new place because they have an eviction case pending against them – and they don’t have any money anyway.”