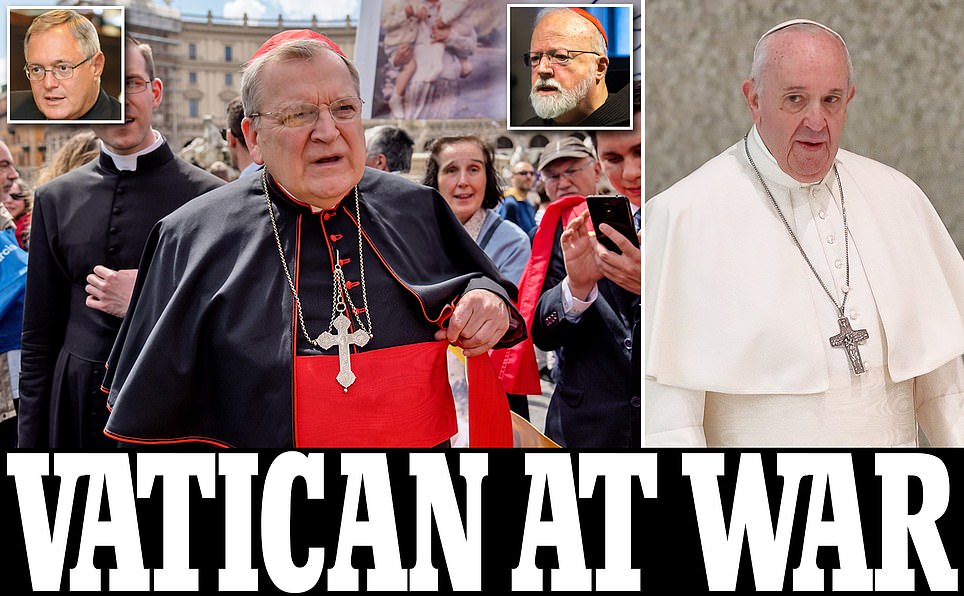 Senior American bishops have hit out at Pope Francis for endorsing same-sex unions, calling the remarks ‘private opinions’ that do not represent the teachings of the church.

US Cardinal Raymond Burke, patron of the Sovereign Military Order of Malta and an outspoken critic of Francis, accused the Pope of sowing ‘error and confusion’ with words that ‘do not correspond to the constant teaching of the Church’.

He was backed by Bishop Thomas Tobin of Providence and Cardinal Sean O’Malley of Boston, who said the remarks are not an endorsement of ‘homosexual activity’.

It comes after Francis told filmmakers that same-sex couples are ‘children of God and have a right to be in a family’ during a 2019 interview made public this week.

Francis came out in support of same-sex unions while serving as the Archbishop of Buenos Aires, but has not spoken out on the issue publicly since he became pope.

His remarks, during a feature-length film called Francesco that was aired at the Rome Film Festival on Wednesday, were viewed by many as a tacit endorsement of same-sex relationships.

Responding to the remarks, Cardinal Burke wrote: ‘Such declarations generate great bewilderment and cause confusion and error among Catholic faithful, inasmuch as they are contrary to the teaching of Sacred Scripture and Sacred Tradition.

‘They cause wonderment and error regarding the Church’s teaching among people of good will, who sincerely wish to know what the Catholic Church teaches.

‘They impose upon pastors of souls the duty of conscience to make fitting and necessary clarifications.

He added: ‘The context and the occasion of such declarations make them devoid of any magisterial weight.

‘They are rightly interpreted as simple private opinions of the person who made them.

‘These declarations do not bind, in any manner, the consciences of the faithful who are rather obliged to adhere with religious submission to what Sacred Scripture and Sacred Tradition, and the ordinary Magisterium of the Church teach.’

Burke goes on to say that all Catholics are commanded to ‘hate the sin but love the sinner’, and that his remarks are not an endorsement of homophobia.

But, he adds: ‘To speak of a homosexual union, in the same sense as the conjugal union of the married, is… misleading, because there can be no such union.’

Bishop Tobin was one of the first to speak out in opposition to Francis, also accusing him of contradicting church teachings.

The Pope’s statement clearly contradicts what has been the long-standing teaching of the Church about same-sex unions,’ Tobin said.

‘The Church cannot support the acceptance of objectively immoral relationships.’

And Cardinal O’Malley added his voice to the dissent on Thursday, saying that Francis ‘strongly and consistently teaches that marriage is between a man and woman for a lifetime and that this is God’s plan for having and raising children.’

‘The Holy Father recognizes that in civil society there can be cogent reasons to enact laws providing for civil unions which are not the same as the institution of marriage.

‘Pope Francis has seen civil unions as a way for governments to provide protections and health care for couples in long-term, committed relationships, whether they be siblings or friends or partners. Such arrangements are not always of a sexual nature.

‘The Holy Father is very aware of the suffering and alienation of homosexual individuals, gay people, who are rejected by family and society.

‘He is also keenly aware of the parents and loved ones who also suffer because a member of their family is bullied or marginalized for being different.

‘The demands of sexual morality are very challenging for anyone seeking to lead a life of faithful discipleship.

‘We do not serve people well by falsely claiming that we can change the Decalogue.

‘Our task is to show people that we love them and care about them and that together we can strive to be better people, more generous, more courageous and more faithful to what God is calling us to do.’

Elsewhere, in the Philippines, Bishop Arturo Bastes said he has ‘very serious doubts about the moral correctness’ of the Pope’s stance.