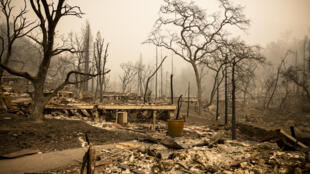 The Silverado Trail has long been a place of dreams for Napa Valley wine lovers as it winds gently through vineyards and on to Calistoga.

California’s Glass Fire turned much of that dream to ash, destroying a 3-star restaurant at Meadowood resort, torching wineries such as Chateau Boswell, and tainting precious grapes with smoke.

At least a dozen Napa wineries and vineyards were burned as the inferno erupted this week, with the scorched area now spanning almost 50,000 acres (20,200 hectares).

On Wednesday at the Trailside Inn Bed and Breakfast, the skeletal remains of a bus converted into an RV (campervan) sat in a smoldering patch near a vintage Packard car with paint melted off the hood.

Smoke rose along the road and on hillsides, where crews of firefighters could be seen attacking pockets of flame with picks, shovels and hoses.

Wineries that weren’t in ruins were closed, often unattended because people had been ordered to evacuate the area and not allowed back in.

A guard stood watch at the entrance to Meadowood, where chef Christopher Kostow had turned the resort’s eponymous restaurant a dining experience that earned three Michelin stars.

While some other parts of the resort were spared, the restaurant was obliterated.

Flames also headed for Kostow’s house in Calistoga, only to burn around the home instead of through it.

“Losing your restaurant and your home would have been a double-hit no one could take,” said Calistoga Mayor Chris Canning, who checked on Kostow’s home for him due to the evacuation.