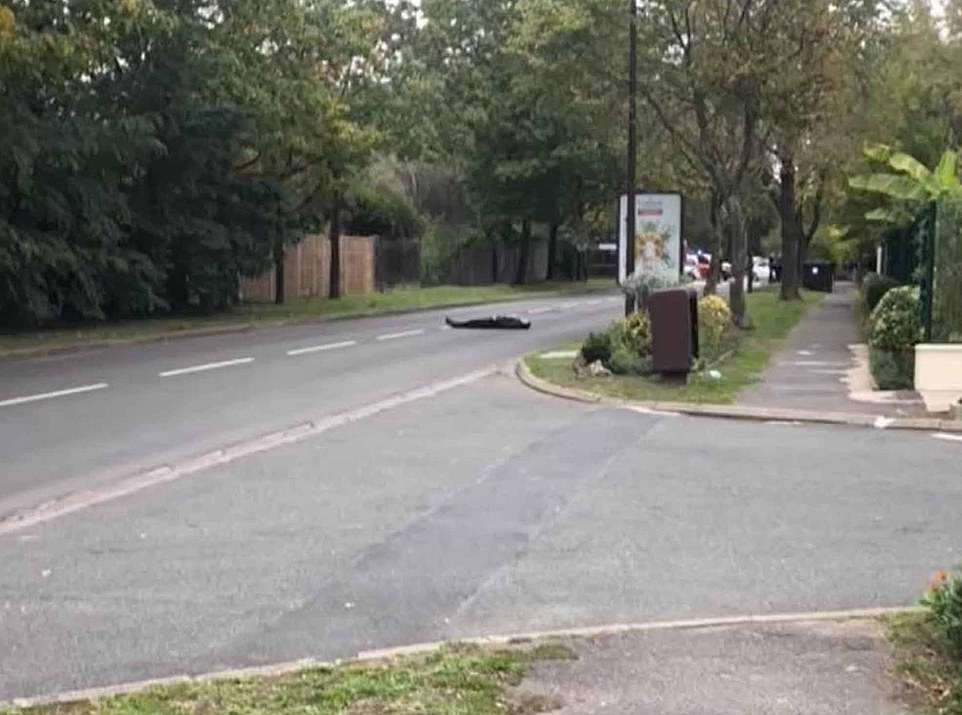 The French President Emmanuel Macron denounced what he called an ‘Islamist terrorist attack’ after a teenager shouting Allahu Akbar allegedly beheaded a school teacher with a knife in Paris.

The victim was said to have been a middle school history teacher who had enraged parents by displaying cartoons of the Prophet Mohammed to pupils.

The attacker, whose identity has not been officially established, was shot by French officers as they tried to arrest him and later died of his injuries, police said.

Today the French leader visited the school where the teacher worked in the town of Conflans-Saint-Honorine and met with staff.

He said: ‘One of our compatriots was murdered today because he taught… the freedom to believe or not believe.

‘He said the attack should not divide France because that is what the extremists want. We must stand all together as citizens.’

A source told Le Parisien: ‘The victim had recently given a lesson to his students on freedom of expression and had shown the caricatures of Muhammad’. The murdered teacher was later identified as Samuel P.

His lesson led to an enraged man confronting him with a knife, and then cutting his head off, said the source.

The dead suspected terrorist was described as an 18-year-old who was born in Moscow, and who had links with the school.

The bloodbath took place in Conflans-Sainte-Honorine, a suburb some 25 miles from the centre of the French capital on Friday at around 5pm (1500 GMT) near a school.

A police source said the scene has been cordoned off and a bomb disposal unit dispatched because of the suspected presence of an explosive vest.

‘[The attacker] is believed to be from a Chechen background,’ said an investigating source, referring to the Russian Federation republic.

Around 30,000 Chechens in total escaped to France, many of them resettling in the suburbs of major cities such as Paris.

Rodrigo Arenas, head of the parent teacher association at the Bois-d’Aulne College, in Conflans Sainte-Honorine, confirmed there had been a legal complaint by ‘an extremely angry father’ last Friday, after a cartoon of a nude Muhammad was shown in class.

Samuel P. had ‘invited Muslim students out of the classroom’ before showing a Charlie Hebdo caricature of the Prophet crouching with a star drawn on his buttocks and the inscription ‘A star is born’.

One young girl – thought to be Muslim – stayed behind by mistake, and later told her parents that she had been shown a picture of a naked man, and he was described as the Prophet.

The photo of Samuel P.’s severed head was posted on Twitter by the killer, before being quickly removed.

Next to it, Emmanuel Macron had been described as ‘the leader of the Infidels’ who ‘dared to belittle Mohammed’.