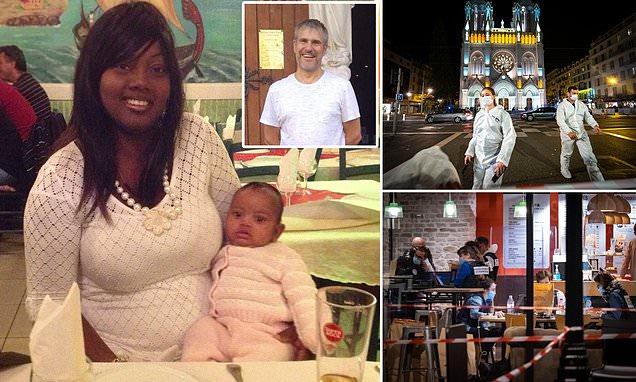 Simone Barreto Silva (left), 44, had lived in France for 30 years and had three sons, the Brazilian Consulate in Paris confirmed last night. The mother was stabbed by Tunisian migrant Brahim Aoussaoui, who also hacked 54-year-old sacristan Vincent Loques (top centre inset) to death as he prepared for Mass. The third victim, described by French authorities as an elderly woman, was butchered near the church’s holy water in a beheading attempt. Simone is said to have staggered to a nearby burger bar before dying of her wounds. According to local media, her final words were to paramedics who rushed to the scene, telling them: ‘Tell my sons that I love them.’ Top right and bottom right, forensic officers working in Nice.