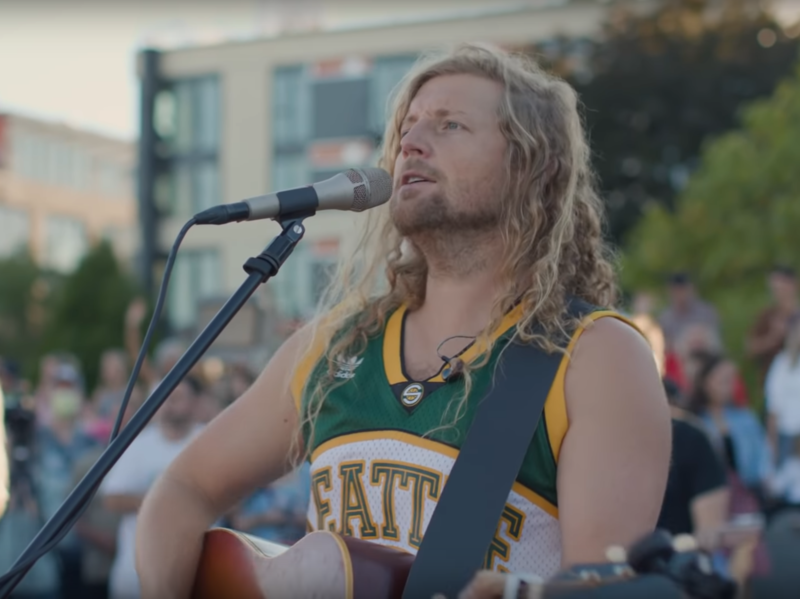 Sean Feucht is an American politician, activist, Christian singer, songwriter and worship pastor at Bethel Church in Redding, California. He ran as a Republican in California’s 3rd Congressional District.

Feucht has been criticized for holding various Christian worship concerts in mid-2020 during and in spite of the COVID-19 pandemic. The concerts were held to protest government restrictions on religious gatherings because of the pandemic.

Biography
Feucht is a graduate of Oral Roberts University and a worship leader at Bethel Church in Redding, California. He has recorded 22 music albums and co-authored 5 books. He founded the organization Burn 24-7 in his college dorm room, which has planted over 300 global chapters called “furnaces” that seek to hold “24-7-365 worship, prayer and supernatural explosive outreach.”

Feucht and 50 other worship leaders visited President Donald Trump for a faith briefing at the White House amid the run-up to the impeachment of Trump in December 2019. There Feucht posed for the infamous picture in which he is seen leaning far across the group to reach the hem of Trump’s garment. This incident was widely seen as poor taste and has been assumed by most that touching Trump led to his failed run for congress. Feucht said of the event, “We just laid our hands on him and prayed for him. It was like a real intense, hardcore prayer. It was so wild.”

2020 congressional campaign
Feucht ran as a Republican for California’s 3rd congressional district in 2020, coming in third place with 14% of the votes, finishing behind John Garamendi and Tamika Hamilton in the March 3 primary. Feucht ran a socially conservative campaign, which was against high taxes and staunchly critical of abortion calling it “the slaughter of the unborn and the newborn.” Some other issues he wanted to focus on were homelessness and affordable housing in California, and he wanted to give parents more rights regarding mandatory vaccination and sex education. Despite running for Congress, he does not see himself as a politician.

Concerts during the COVID-19 pandemic
During the later half of 2020, when the COVID-19 pandemic was ongoing, Feucht arranged worship concerts across the United States that drew crowds of thousands to protest government restrictions on religious gatherings. These concerts were later expanded to focus on cities with George Floyd protests. Feucht stated, “We just feel this call to really target cities that are under extreme turmoil and despair and brokenness” and said it was a new Jesus Movement. Bethel Church, where Feucht is a worship leader, did not financially support him, but wrote a statement of support for his movement and vision.

In June 2020, Feucht held a worship session at the site of the killing of George Floyd in Minneapolis, Minnesota and claimed a revival was happening, calling it the “Minneapolis miracle” and the “HOPE RALLY.” Feucht called the killing an “injustice” and referred to it as “the trauma” but was critical of Black Lives Matter’s support for gender identity politics and abortion rights in online posts prior to the worship session. He claimed on Twitter afterwards that he and senior Bethel pastor Beni Johnson were censored by Twitter and Instagram for sharing videos of the events and posting Bible verses. His posts were shared by senator Josh Hawley who stated “Cancel culture meets #BigTech. Now @instagram is censoring a Christian worship leader who wants to post videos of praise and worship from places where there has recently been unrest.”

In August 2020, Feucht led similar worship concerts called “Riots to Revival” in Portland, Oregon, and Seattle, Washington. The sites of the concerts had recently been the sites of major protests and riots, including Seattle’s Cal Anderson Park which had been part of the territory controlled by the Capitol Hill Organized Protest. The concerts violated local laws requiring masks and social distancing amidst the COVID-19 pandemic. Feucht claimed that between 4,000 and 7,000 attended the concert in Portland.

In September 2020, Feucht attempted to hold a Labor Day “prayer rally” at Seattle’s Gas Works Park, but after the city closed off all its major parks for the holiday due to expected overcrowding, Feucht held the rally in the street across from the park. He originally failed to get a permit, but the city allowed the rally when he called it a “worship protest”. Hundreds packed the street tightly, mostly without wearing face masks. Later that month, following a concert in Kenosha, Wisconsin, the site of the Kenosha protests, Feucht was prevented from holding a concert on the South Side of Chicago after police threatened to take action against him for not having a permit for the event.

Thousands of people are expected to gather on the National Mall in Washington, D.C., on Sunday evening to participate in a worship event and to protest COVID-19 restrictions.

The event, part of California-based Christian singer Sean Feucht‘s “Let Us Worship” tour, is expected to draw up to 15,000 people, according to a permit issued this week.

The National Park Service granted the permit for the event, which will take place on federal property, though participants will reportedly not be required to wear face masks.

“For all permit applications, we discuss a COVID-19 mitigation plan with the event organizers, but that plan is not a requirement for or condition of the permit,” a National Park Service official told CBS affiliate WUSA.

“While the National Park Service strongly encourages social distancing, the use of face coverings and other measures to prevent the spread of infectious diseases, we will not require nor enforce their use,” the official added.

Some have raised concerns about holding a large gathering — even outside — without widespread mask use.

“I mean anytime there’s a group of a large number of people in one area, there is a potential for spread,” Wortmann said, adding that holding the event outside “makes the risk [of spread] lower.”

Tour organizers emphasize that all crew members will have their temperatures monitored and that gloves and face coverings will also be provided, WRC-TV reported, though attendees are not required to wear masks.

PRAYING AT THE WHITE HOUSE 🙏🏽🇺🇸🚀

The event will serve as the last stop of a prayer tour led by Feucht that has drawn large crowds across the country. Images and videos posted online show that previous events featured mass baptisms, prayer and singing.

The tour’s website calls on supporters to “rise up” against what it deems unjustified restrictions amid the COVID-19 pandemic, saying states across the country “have shut down church services and even outlawed singing in church.”

“In unprecedented acts of government-authorised injustice, Christians are being told they cannot gather for worship, they cannot sing songs of praise, and they cannot observe church ordinances,” Feucht wrote in an op-ed for The Federalist last month, describing the events as “worship protests.”

D.C. is currently in phase two of its reopening plan, which encourages teleworking and limits mass gatherings to 50 people, though churches can apply for waivers for larger groups. However, since Sunday’s event will take place on federal land, the District won’t have a say in the event.

The Hill has reached out to Let Us Worship for further comment.

NFL to Fine Unvaccinated Players $14,650 if They Violate Coronavirus Protocol