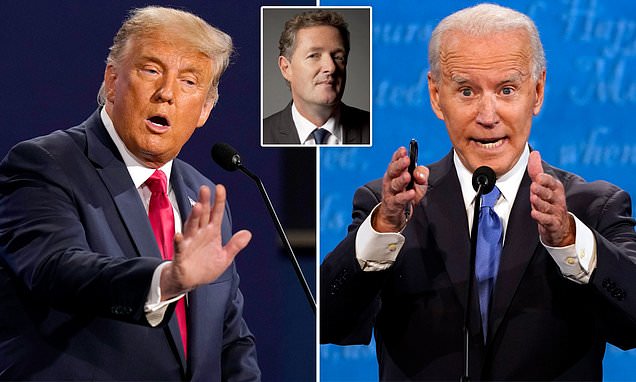 ‘I generally avoid temptation,’ said actress Mae West, ‘unless I can’t resist it.’

My mind turned to this wonderful quote numerous times during last night’s second and final presidential debate as I watched Donald Trump’s face.

Time and again, I could tell he was itching to take the gloves off and start ranting abusively and personally at his opponent Joe Biden, as he had done in the first debate.

But to my astonishment, instead of succumbing to his basest instincts, Trump pursed his lips, screwed up his cheeks, grimaced, scowled and, for the most part, avoided temptation.

Instead of the ranting, deluded, narcissistic buffoon we got last time, this was a far calmer, measured, focused, well-prepared, non-scary and even empathetic performance by the president.

We saw a new, tamer Trump and I liked it as much as I was surprised by it.

But it was a specific exchange between Washington Post reporter Marc Fisher and the group about ‘character’ that really caught my eye.

Luntz, a Republican, tweeted: ‘They say Joe Biden is a more decent person, but they side more with Trump’s policies and how they affect their daily lives.’

There, right there, is the real issue.

If this election is purely about who’s a nicer guy, Biden’s a clear undeniable winner.

As my wife said while we watched the debate: ‘There’s just something very likeable about him.’

That’s true, there is.

But right now, I’m not sure most Americans really care about having a nice president, they just want someone to get them out of this hellish mess.

I thought Biden had a good debate, certainly by his standards.

He was almost gaffe-free, didn’t stumble too much, and was at his best when he displayed genuine anger and passion over America’s appalling coronavirus death toll, and the devastation it has caused to so many families. Biden’s own experience with personal tragedy gives him a deep and very authentic empathy valve that can’t be manufactured. He knows what it means to suffer real loss and it showed.

He’s also a long-time public servant with 50 years of political experience who is presenting himself as the antidote to Trump’s controversy-driven presidency, the ‘healer’ to cure America’s current state of chaos.

In that regard, Biden didn’t let himself down.

It was a solid performance.

But nor did he say anything refreshingly new that screamed ‘VOTE FOR ME!’

His was more a 90-minute message of ‘DON’T VOTE FOR TRUMP!’

And that message – which is very similar to Hillary Clinton’s failed strategy in 2016 – barely reached the decibel level worthy of capital letters.

It’s not Biden’s fault, given he’s nearly 80, but he has half the energy, dynamism and vision of Barack Obama and that’s a problem when compared to Trump who, love him or hate him, always bursts with charismatic vitality.

The president may be a polarizing, inflammatory man with barely any experience of public service.

But he skilfully exploited that apparent weakness as a strength – repeatedly berating Biden for not doing the things he’s now promising to do on issues like healthcare and immigration during his eight years as vice president.

‘You keep talking about all these things you’re going to do,’ Trump sneered. ‘Why didn’t you get it done? All talk and no action, just like a politician.’

It’s a good point, so much so that at one stage rattled Biden even chucked Obama under the bus over why he hadn’t done more to tackle immigration, exclaiming: ‘It took too long to get it right, I’ll be president of the United States, not vice president.’

This debate, unlike the last unedifying fiasco, was a proper debate, superbly moderated by NBC’s outstanding Kristen Welker who was so fair, firm and authoritative that Trump even paid tribute to her, saying: ‘I respect very much the way you’re handling this.’