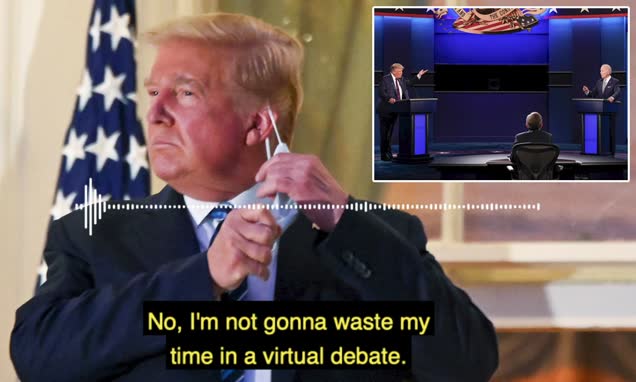 Donald Trump said Thursday morning he will not participate in a virtual debate with Democratic nominee Joe Biden. ‘That’s not accessible to us. I beat him easily in the first debate,’ Trump lamented in an interview with Fox Business minutes after the bipartisan commission that hosts the debates announced it would be shifting the format to virtual. ‘No, I’m not gonna waste my time in a virtual debate,’ the president added. ‘That’s not what debating is all about,’ he said. ‘You sit behind a computer and do a debate – it’s ridiculous and then they cut you off whenever they want.’ The Commission on Presidential Debates made the announcement Thursday morning, a week before Trump and Biden were scheduled to face-off in-person in Miami, Florida for the second of three debates. ‘No Presidential Candidate is required to debate,’ Chairman of the Commission on Presidential Debates Frank Fahrenkopf told NBC News. ‘Jimmy Carter refused to debate during the first debate in 1980. It is up to the individual candidate.’ Only once before in presidential history has a major party candidate refused to take part in a debate, when Jimmy Carter declined to attend the first debate in 1980. But it went ahead with two taking part because as well as Ronald Reagan, independent candidate John Anderson was in the race.