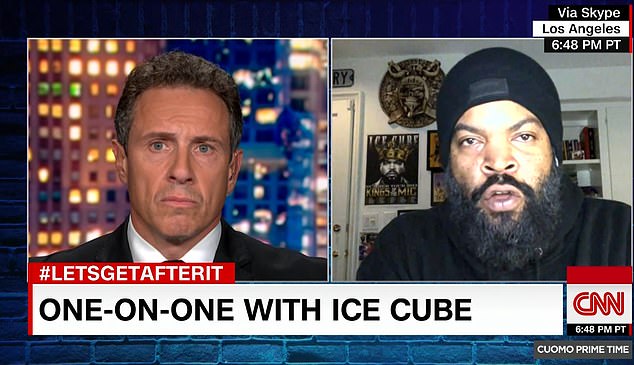 Ice Cube has defended his decision to work with Donald Trump on a plan for black Americans as he finally went on CNN after blasting the network and host Chris Cuomo for canceling his interview the day before.

The rapper insisted he is ‘working with whoever is in power’ and that he is ‘not on nobody’s team’ during an interview with Cuomo Friday night.

Ice Cube has been forced to defend himself after the Trump administration said this week it was working with him on creating policies to better serve African American communities.

He was slammed following the announcement as fans questioned how he could go ‘from NWA to MAGA’ and claimed he was being used by Donald Trump and his administration to try to claw in black votes just before the election.

The hotly-anticipated discussion with Cuomo came one day after Ice Cube claimed CNN had axed his appearance on Cuomo Prime Time Thursday night saying they ‘can’t handle the truth’.

Ice Cube told Cuomo Friday he ‘was not on team blue’ and also ‘not on team red’ but would work with whoever is ‘in power’ on his Contract With Black America.

‘Whoever wins – you will hear from me,’ he said of the election.

CWBA is a program formed by the rapper in August with the intention of ‘striking at the heart of racism and [presenting] a blueprint to achieve racial economic justice.’

Ice Cube insisted his plan is not the same as the Trump administration’s Platinum Plan, which Trump has held up as a program to support African American communities.

He said he didn’t reach out to the Trump administration but that both the Trump and Biden campaign reached out to him about CWBA.

He explained that, while both sides expressed interest in working with him, Biden’s team asked to work with him after the election while Trump’s asked to speak with him then.

‘The Platinum Plan is not my plan,’ he said. ‘I came up with the Contract With Black America.

‘I didn’t run to work with any campaign. Both camps contacted me and both campaigns wanted to work with me on the Contract With Black America.

He insisted that tackling the issue of racial inequality was not a partisan matter to him and that he was going to ‘go to whoever is in power and speak to them about our problems specifically’.

‘I’m not talking about minorities or people of color or diversity or none of that stuff,’ he continued.

‘I’m going there for black Americans – the ones who are descendants of slaves and that’s what I’m going to talk to anyone who is in power about so if anybody’s got a problem with that it seems like a personal problem to me.’

Cuomo launched into the interview with a run down of differences between Ice Cube’s music career and Donald Trump’s stance on racial equality.

The anchor described how Ice Cube started out ‘rapping in defiance of police presence’ and cut to a clip of his 2018 song ‘Arrest the President’ where the rapper hit out at Trump saying he was ‘Russian intelligence’ and ‘so full of s***’.