Melania Trump outlined the ways she’s keeping the staff who man the White House residence safe as she and President Donald Trump battle COVID while Ivanka Trump joined the ranks of officials working from home after the number of aides testing positive for the coronavirus has grown.

President Trump, still contagious from his bout with the disease, has returned home, raising concerns about the Secret Service agents who guard him and the more than 100 staffers in the White House residence, most of who are elderly and a minority, which puts them at greater risk for contracting COVID.

The first lady outlined the safety guidelines in place for those in the residence, which falls under her jurisdiction.

‘The health and safety of the Residence staff is of the utmost importance to the First Family,’ Melania Trump said in the statement.

She noted that since March hospital-grade disinfection policies have been in place and staff have been encouraged to telework when they can.

Residence staff in direct contact with the first family are tested daily, with support staff tested every 48 hours.

‘In the beginning of April, all Residence staff were required to wear masks at all times,’ she noted.

There was also a a ‘well-being’ consultant hired to whom staff members can speak to anonymously, specifically to focus on mental health concerns.

The Secret Service, meanwhile, is not saying how many of their agents have tested positive for the disease.

Meanwhile, two military aides who had close contact with the president tested positive for virus.

One was a valet – who are active members of the military – who traveled with the president last week, Bloomberg News reported, while another was Coast Guard aide Jayna McCarron.

Military aides act like personal assistants, serving the president his meals, carrying his travel bag, placing phone calls and conducting an assortment of other duties – all things that put them in close, personal contact with the president. They travel with him and are in and out of the Oval Office – or where ever he is – all day.

And the West Wing became akin to a ghost town this week after the positive coronavirus diagnoses swept through the Trump administration.

Many executive staff are working from home, including his daughter Ivanka, whose spokesperson told DailyMail.com the senior adviser is taking that option this week out of an abundance of caution even though she’s been testing negative.

White House deputy press secretary Judd Deere said staff are being told not to come to work if they have symptoms and that procedures are in place to protect those on the job.

‘In addition to encouraging staff not to come to work if they have any symptoms, social distancing, readily available hand sanitizer, regular deep cleaning of all work spaces, and recommended facial coverings, those in close proximity to the President will continue to be tested for COVID-19 to ensure exposure is limited to the greatest extent possible,’ he said in a statement.

The White House press office, where press secretary Kayleigh McEnany and two of her deputies have the disease, is operating on a rotating schedule, with staff taking turns to come in to man the desks and phones.

Trump aides including Hope Hicks, one of his closest advisers and his ‘body man’ Nick Luna also tested positive, as have an escalating number of staff in the residence – adding to fears among the staff they may have been exposed.

There are reports staff have complained about a lack of information such as contract tracing, telling news outlets they have learned about co-workers testing positive through media reports.

An email did go out to staff Sunday  night.

‘As a reminder,’ read the letter from the White House Management Office, according to the Associated Press, which obtained a copy, ‘if you are experiencing any symptoms … please stay home and do not come to work.’

The escalating cases with concern there are more to come have led to concern the White House could rapidly become Ground Zero.

Several cases have already been traced to last Saturday’s announcement of Supreme Court nominee Amy Coney Barrett and, on Tuesday, the chairman of the Joint Chief of Staff and several high-ranking Pentagon officials were quarantining after a general who attended an event for ‘Gold Star’ families at the White House – with the president and first lady – tested positive.

Despite what is shown on TV and in the movies – spacious hallways with aides walking and talking, large offices with big windows – the West Wing of the White House is small and cramped.

Senior staff usually have a spacious office but the lower tier staffers are packed in like sardines.

In fact, office space in the West Wing is at such a premium that staff assistants and junior staffers can share a desk in  small, windowless room.

While, McEnany, for example, has a spacious office as press secretary, outside her door are four assistants working together crammed in one room with no windows.

The West Wing is actually several floors – the main level houses the press briefing room, the Oval Office, the chief of staff’s office and is where Jared Kushner has an office suite. There are more suites upstairs, which is where Ivanka Trump’s office is located. Downstairs is the White House mess, where staff can go down and get lunch.

Scott McCellan, when he was press secretary for George W. Bush, was asked to compare what it was like to work in the actual West Wing compared to what viewers saw on the popular NBC show about the White House at that time, ‘The West Wing.’

The residence, meanwhile, has become a treatment ward with President Trump and first lady Melania Trump both being treated for COVID.

The president’s physician, Dr. Sean Conley, said Trump had a restful night at home on Monday and reports no symptoms.

‘This morning the president’s team of physicians met with him in the residence, Conley wrote in a statement. ‘He had a restful first night at home, and today he reports no symptoms. Vital signs and physical exam remain stable, with an ambulatory oxygen saturation level of 95-97%. Overall he continues to do extremely well. I will provide updates as we know more.’

Conley came under fire on Saturday for refusing to give the president’s oxygen level. Anything below 95% is a matter of concern. The doctor later conceded it went under that, requiring Trump to receive supplemental oxygen on Friday night, but he never gave the precise figure.

Trump is being monitored in the residence, which has a medical suite and military doctors and nurses on call, while everyone around him is wearing N-95 masks – conditions unavailable to ordinary COVID patients. He is being given experimental treatments which are not widely available, in a combination which may never have been tried on anyone else.

Deere said staff were limiting their exposure to the president and were wearing the appropriate personal protective equipment.

‘The American people can rest assured with the President’s return that the White House is taking every precaution necessary to protect not only him and the First Family, but every staff member working on the complex to support the federal government’s operations consistent with CDC guidelines and best practices,’ he said.

‘Physical access to the President will be significantly limited and appropriate PPE will be worn when near him. President Trump will continue to receive around-the-clock medical care and monitoring from his Physician and a team of dedicated physicians and nurses in the White House Medical Unit who function out of a state-of-the-art clinic, which includes many of the things a person would see in an urgent care clinic and much more, to ensure the Commander-in-Chief makes a full recovery and can continue to discharge his duties

Meanwhile, a cleaning crew outfitted in hazmat suits sanitized the West Wing after President Trump returned to the White House.

Trump on Monday walked out of Walter Reed Medical Center after being blindsided by his COVID-19 diagnosis last week, and boarded Marine One back to the White House.

Trump admitted that his administration previously downplayed the pandemic -and officials were often seen flouting CDC recommendations – but photos taken after his arrival showed a renewed attempt at precaution.

Within hours of Trump’s return, a White House employee was seen administering a deep clean to parts of the James S. Brady Press Briefing Room.

The employee donned a protective hazmat suit and carried a cleaning spray to rid the president’s quarters of the virus.

The press briefing room was used Thursday by McEnany, who announced on Monday she tested positive for COVID-19.

McEnany, 32, continued going to work on Friday, Saturday and Sunday at the White House despite Trump testing positive late on Thursday night, and she took her mask off on Sunday to brief reporters.

She defended her decision to continue coming to work, saying she is an ‘essential worker’ who was expected there.

She had been in close contact with the president and others at White House who have tested positive, but repeatedly tested negatively herself until Monday.

The White House staff are tested every day with rapid testing kits and have been relying on those results to let people back into the building since Trump’s diagnosis last week, even though it is commonly known that it can take several days after someone becomes exposed for their viral load to be substantial enough to yield a positive result. 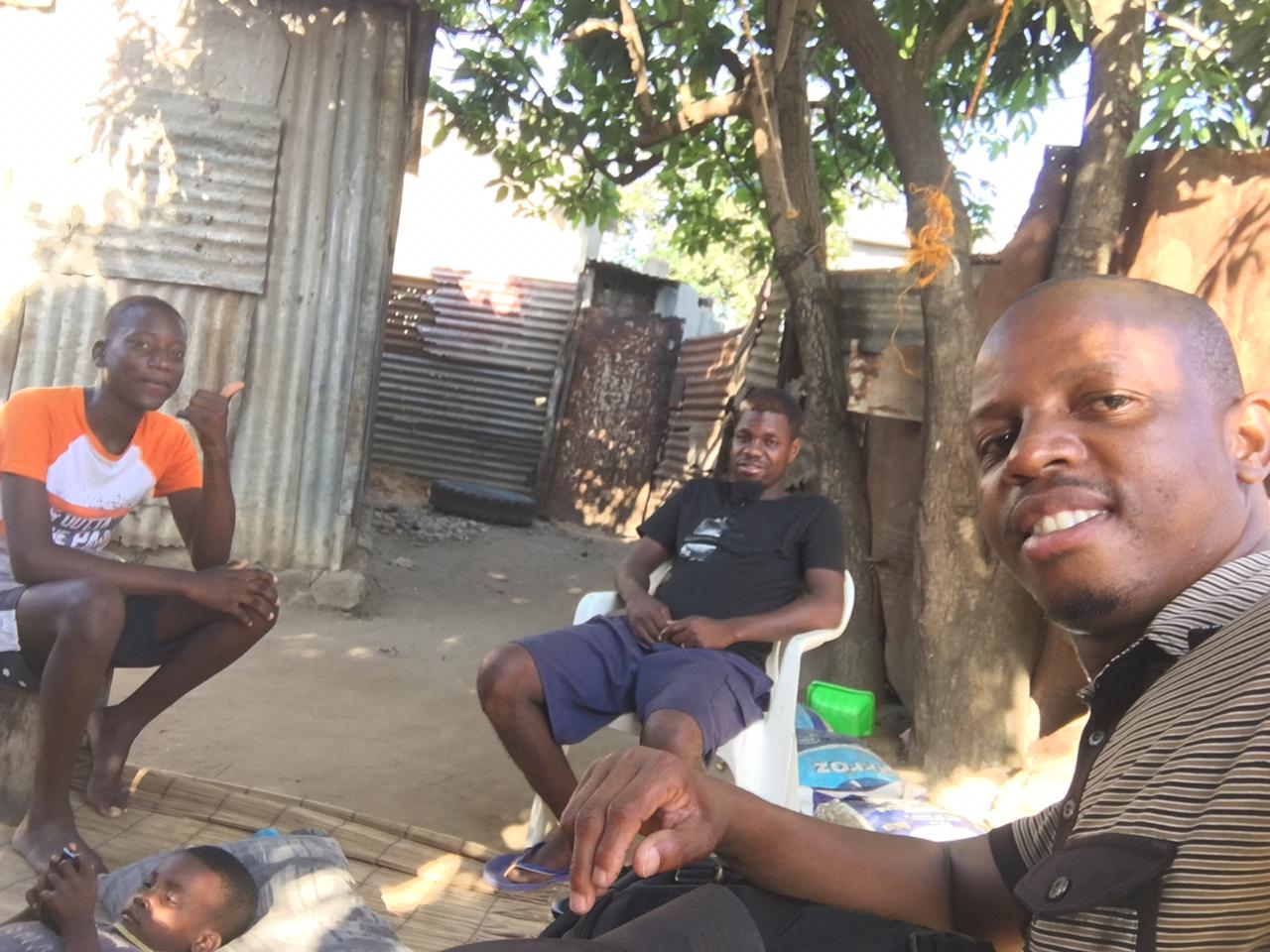