CNN anchor Brooke Baldwin has fueled speculation she’s left the network after posting a cryptic Instagram message saying Jake Tapper will ‘hold down’ her show until after the election and telling a fan ‘it’s not my choice’.

Baldwin, who anchors the 2 – 4 p.m. edition of CNN Newsroom, wrote in a social media post Thursday that she was stepping away from her presenting duties in the lead-up to the presidential election.

The host, who endured a public battle with coronavirus back in April, made the shock announcement the very same day she celebrated her 10-year anniversary hosting the show.

She gave no reason for the move but told fans she did not want to come off the air, was going ‘nowhere’ else and vowed to return saying she will see them ‘on the flip side’.

‘Oct 1, 2020: It was on this day TEN YEARS AGO when I first started anchoring my own show on CNN (technically it wasn’t *my* show that very first day… but little did I know, after an unexpected chain of events, those two hours would become mine),’ she wrote alongside a photo of herself today and 10 years ago when she started on the show.

‘I have cherished my time with you this past decade. It’s been a dream of mine to work at CNN.’

Baldwin, 40, reeled off some key memories working for CNN, writing that ‘in the last ten years, we’ve witnessed history together’.

‘I’ve laughed and cried with you… I’ve rung in many a New Year with you. I’ve been sick with you. I have GROWN with you,’ she wrote.

‘Sitting in that seat live on CNN every afternoon has been and still is an absolute privilege.

Baldwin then announced that Tapper would ‘hold down’ her show up to the election but vowed to ‘see ya on the flip side’.

‘As the election gears up, the political maestro @jaketapper will hold down my hour and his for the coming weeks,’ she wrote.

‘Wish I was was with you, but I’ll see ya on the flip side of the election. In the meantime, you know where to find me.’

She added: ‘Oh, and you see my necklace? Don’t forget to vote.’

Baldwin provided no explanation for the abrupt announcement and her fans were quick to question the move.

The anchor added more confusion in her responses to several questions from fans. 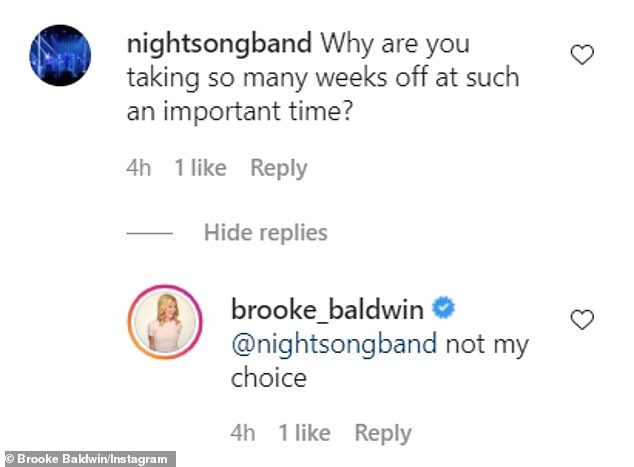 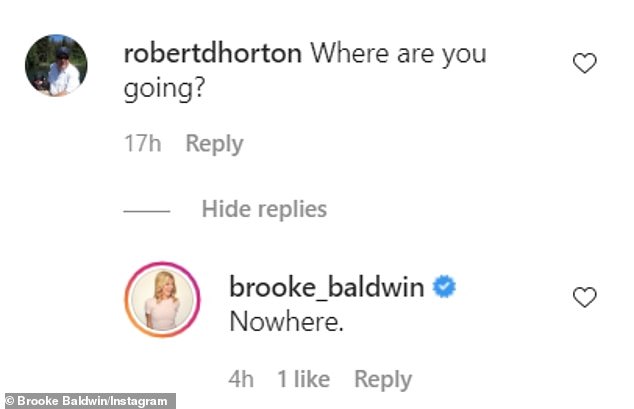 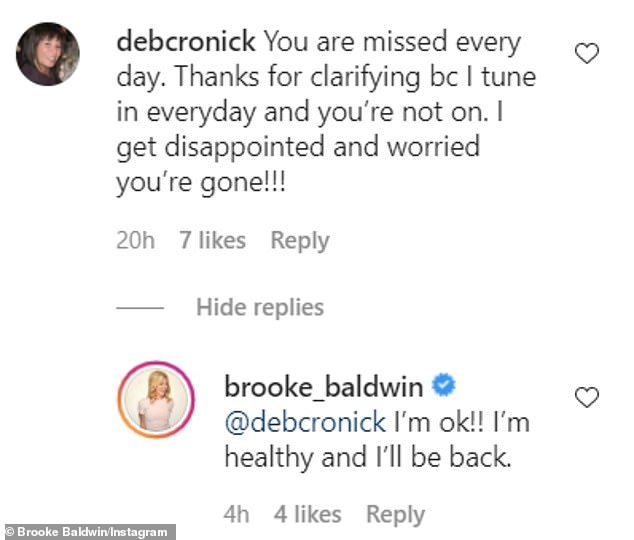 When asked ‘Why are you taking so many weeks off at such an important time?’, she simply replied: ‘Not my choice.’

She said she was going ‘nowhere’ in response to a question about her moving on elsewhere.

Baldwin also dispelled speculation that the decision to step aside was for health reasons insisting that she is ‘healthy’.

Back on April 3, Baldwin revealed she had tested positive for coronavirus and shared her symptoms as her condition worsened as well as her subsequent recovery with her social media followers.

‘I’ve tested positive for coronavirus,’ she wrote. ‘I am OKAY. It came on suddenly yesterday afternoon. Chills, aches, fever.’

On April 27, she returned to anchor and spoke on the show about her battle with the illness, saying she had been to ‘hell and back’.

She described the ordeal as ‘a beating both mentally and physically’ and said the pain from her fever, chills and aches often left her in floods of tears.

‘I never knew when it would end,’ Baldwin told viewers at the time.

‘It was relentless, scary and lonely. But I was one of the lucky ones.’

Baldwin first joined CNN back in 2008.

As well as hosting CNN Newsroom she is also the creator and host of CNN’s Digital series ‘American Woman’ which features stories of women who have been trailblazers in their fields.

Tapper is currently the anchor of CNN’s weekday newscast ‘The Lead With Jake Tapper’ and Sunday morning’s ‘State of the Union’ program.

CNN did not immediately return DailyMail.com’s request for comment.