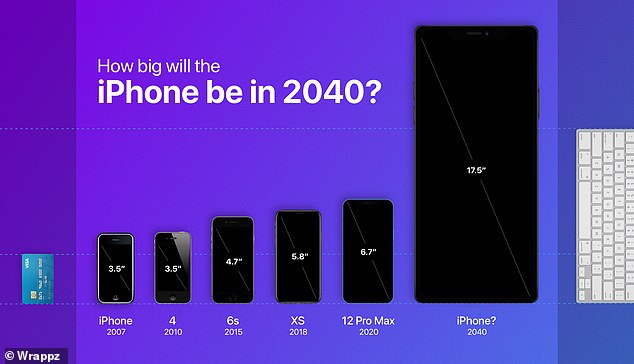 The new iPhone 12 Pro Max has a screen that’s 6.7 inches tall, which is nearly double the size of the original iPhone released in 2007.

A new study suggests that if this sizing trend continue, the Apple smartphones could be larger than a MacBook in 20 years.

Phone accessory company Wrappz analyzed the evolution of smartphones by Apple, Samsung and other top makers.

According to its findings, the iPhone has grown five percent every year since its 2007 debut.

‘From the camera quality to advancements of technology networks, we’ve seen the iPhone incorporate a number of changes since its launch in 2007,’ Wrappz said. ‘However, perhaps the most noticeable change we’ve seen has been its size increase.’

While the first iPhone in 2007 had a screen size of just 3.5 inches, the recently announced iPhone 12 Pro Max is almost double the size, at 6.7 inches. In total, that equates to a 91 percent increase and an average growth of 5 percent year-on-year. ‘

Apple kept the iPhone at 3.5 inches until the iPhone 5, which boasted a 4-inch screen.

It maintained that size until 2014, when the iPhone 6 Plus hit the market at 5.5-inches long.