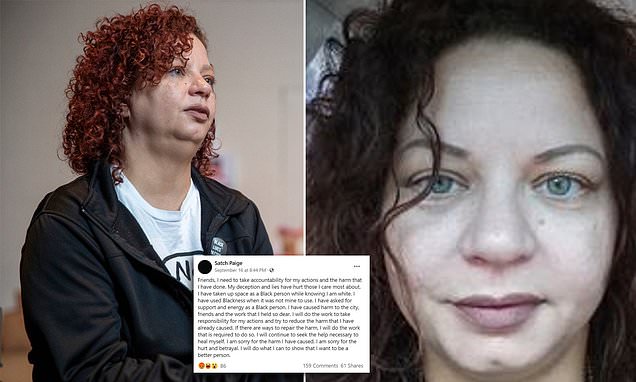 A community activist who campaigned for racial justice has outed herself as a race faker after posing as a black person for years despite being white.

Satchuel Cole, born Jennifer Lynn Benton, admitted in a Facebook post to having ‘taken up space as a Black person while knowing I am white’.

The activist, from Indianapolis, was a member of the Indy10 Black Lives Matter group and in 2017 acted as a spokesperson for the family of Aaron Bailey, who was shot and killed by police following a traffic stop in June 2017.

Cole – who uses the pronouns they and them – is just the latest in a string of people who have admitted to lying about being black.

‘Friends, I need to take accountability for my actions and the harm that I have done,’ Cole wrote on a Facebook page with the name Satch Paige.

‘My deception and lies have hurt those I care most about. I have taken up space as a Black person while knowing I am white. I have used Blackness when it was not mine to use.

‘I have asked for support and energy as a Black person. I have caused harm to the city, friends and the work that I held so dear. I will do the work to take responsibility for my actions and try to reduce the harm that I have already caused.’