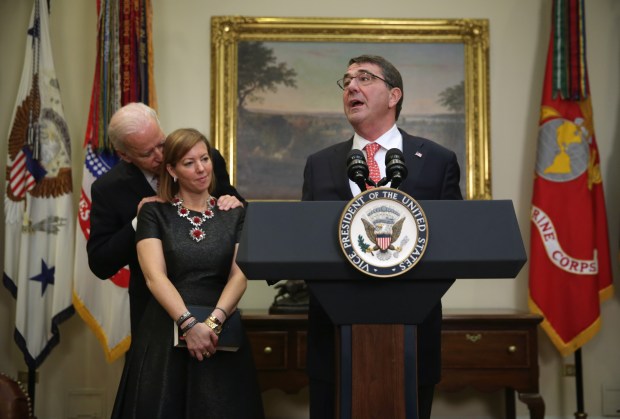 President Donald Trump has shockingly shared a post claiming that rival Joe Biden is a pedophile along with a “misleading” video of the former VP whispering into a woman’s ear.

Trump retweeted the GIF from a conservative Twitter user’s account on Tuesday morning that included the hashtag “#PedoBiden.”

The clip shows former Defense Secretary Ash Carter speaking at a podium during his swearing-in ceremony at the White House in 2015 while his wife, Stephanie Carter, and Biden stand nearby.

Biden is seen standing behind Carter with his hands on her shoulders – and briefly whispers in the woman’s ear before she smiles and nods reassuringly.

While her age is unclear, it’s very clear that Carter is a woman and not a child or underage female.

There’s no evidence to suggest that Biden is a pedophile and claims that he is are unfounded and have no basis in fact.

In 2019, she spoke out against the shot of her and Biden on stage and said it’s “misleadingly extracted.”

Carter wrote in a blog post that Biden’s show of affection during her husband’s ceremony to lead the Department of Defense was appreciated.

“After the swearing-in, as Ash was giving remarks, he leaned in to tell me ‘thank you for letting him do this’ and kept his hands on my shoulders as a means of offering his support,” Carter wrote.

“But a still shot taken from a video — misleadingly extracted from what was a longer moment between close friends — sent out in a snarky tweet — came to be the lasting image of that day.”

Carter said she had known Biden and his wife, Jill, “for many years, long before he had become vice president.”

“I told them I felt awful that after he had generously taken time out of his day to swear in an old friend, his attempt to support me had become a joke and even more — supposed proof positive that he didn’t understand how to respect women.