The RMS Titanic may have only taken the exact fateful course that saw it holed and sunk by an iceberg on April 15, 1912 because a solar flare threw off the vessel’s compass readings, a study has proposed.

According to a US-based meteorologist, the liner’s last night sailing the Atlantic was illuminated by the aurora borealis — the light show caused by the interaction with the atmosphere of charged particles from the sun.

Based on eyewitness accounts of the aurora’s appearance that night, she argues, the ‘geomagnetic storm’ may have been large enough to influence navigation to a small, but nevertheless significant degree.

The interference may also have served to disrupt wireless transmissions between the sinking liner and other vessels in the nearby vicinity — blocking some the Titanic’s distress calls and the messages sent in response.

However, the researcher claims, the magnetic disruption may have had an upside — helping to offset the error in the Titanic’s broadcast position, accidentally leading another vessel to the correct location of the liner’s lifeboats.

Solar flares can cause substantial damage, if of a high enough intensity. A storm in 1859, for example — the ‘Carrington Event’ — induced such currents in telegraph wires that pylons sparked and operators received shocks.

Were such an event to happen today, experts believe it would cause unprecedented levels of damage to electronics and power grids across the globe — with the potential for tragedy on a par with that of the Titanic.

‘Most people who write about Titanic, they don’t know that northern lights were seen on that night,’ independent weather researcher and retired computer programmer Mila Zinkova of California told Hakai magazine.

‘Even if the compass moved only one degree, it already could have made a difference,’  she added.

Titanic survivor and author Lawrence Beesley described seeing the aurora borealis in his account of the disaster, writing that after the vessel had gone under, he saw from the lifeboats ‘a faint glow in the sky ahead on the starboard quarter, the first gleams, we thought, of the coming dawn.’

‘We were not certain of the time and were eager perhaps to accept too readily any relief from darkness — only too glad to be able to look each other in the face and see who were our companions in good fortune; to be free from the hazard of lying in a steamer’s track, invisible in the darkness,’ he continued.

‘But we were doomed to disappointment: the soft light increased for a time, and died away a little; glowed again, and then remained stationary for some minutes! “The Northern Lights”! It suddenly came to me, and so it was.’

In a similar fashion, second officer James Bisset of the RMS Carpathia — the Cunard line passenger steamer, bound for Fiume in Austria-Hungary (today Rijeka, Croatia), that came to the rescue of the Titanic’s survivors — made note of the northern lights in his log around one hour before the Titanic struck the iceberg.

‘The weather was calm, the sea smooth, with no wind. The sky was clear, and the stars were shining. There was no moon, but the Aurora Borealis glimmered like moonbeams shooting up from the northern horizon,’ he wrote.

According to Mr Bisset’s logs, the space weather was still going strong some five hours later, as the Carpathia neared the lifeboats.

‘Though the night was cloudless, and stars were shining, the peculiar atmospheric conditions of visibility intensified as we approached the icefield with the greenish beams of the Aurora Borealis shimmering and confusing the horizon ahead of us to the northwards,’ he noted.

Compass errors may have had other effects the night the Olympic-class liner went down, Ms Zinkova suggested.

Responding to the Titanic’s distress signal, the RMS Carpathia — a Cunard line passenger steamer bound for Fiume in Austria-Hungary (today Rijeka, Croatia) — received incorrect co-ordinates for the stricken vessel that were out by some 13.5 nautical miles (15.5 miles/25.0 kilometres) from the Titanic’s actual location.

Nevertheless, the Carpathia succeeded in sailing directly to the Titanic’s drifting lifeboats — a feat Ms Zinkova attributes to the solar-storm-induced compass errors conveniently cancelling out the misstated coordinates.

‘The light from the aurora may also have been beneficial to the rescue operation,’ she added.

The Carpathia succeeded in rescuing 705 survivors of the disaster from the Titanic’s 20 lifeboats.

‘The fact that so many people saw the aurora makes me confident that there was a space weather event happening,’ space and atmospheric physicist Chris Scott of the University of Reading, who was not involved in the study, told Hakai magazine.

He added that modelling the Earth’s ionosphere on the night of the disaster and simulating known radio broadcasts sent by the ships in the vicinity of the Titanic could help shine a light on why some messages got through and others did not.

Titanic historian Tim Maltin, meanwhile, told Hakai magazine that he agreed that there was sufficient evidence that a solar storm coincided with the catastrophe — but thought it ‘was not a significant factor’ in the sinking.

Constructed by Belfast-based shipbuilders Harland and Wolff between 1909 and 1912, the RMS Titanic was the largest ship afloat of her time.

Owned and operated by the White Star Line, the passenger vessel set sail on her maiden voyage from Southampton to New York on April 10, 1912.

The liner made two short stops en route to her planned Atlantic crossing — one at the French port of Cherbourg, the other at Cork Harbour, Ireland, where smaller vessels ferried passengers on and off board the Titanic.

Nearly five days into her voyage, the Titanic struck an iceberg at around 23:40 local time.

This generated six narrow openings in the vessel’s starboard hull, believed to have occurred as a result of the rivets in the hull snapping.

The Titanic took on water some fifteen times faster than could be pumped out.

The hull damage proved too extensive for the vessel’s watertight bulkheads to keep the flooding from spreading across the liner’s compartmentalised lower decks.

After around two-and-a-half hours, the vessel broke into two sections and sank, each settling to the seafloor around a third of a mile apart.

Around 1,500 people were believed lost in the tragedy, including around 815 of the liner’s passengers.

The Titanic disaster prompted the drawing up of the Safety of Lives at Sea convention in 1914, which today still sets the minimum safety requirements to which all ships are required to comply.

While the stern of the sunken vessel was ruined, much of the bow — despite impact damage and deterioration — remained recognisable when the wreck was finally discovered on the seafloor by US underwater archaeologist Robert Ballard in 1985.

Since then, dozens of expeditions to the wreck to observe the ship and recover artefacts have been carried out.

Experts, however, are concerned this activity is causing the Titanic to decay far faster than she otherwise would on the sea floor.

Ms Zinkova’s full paper was published in the journal Weather. 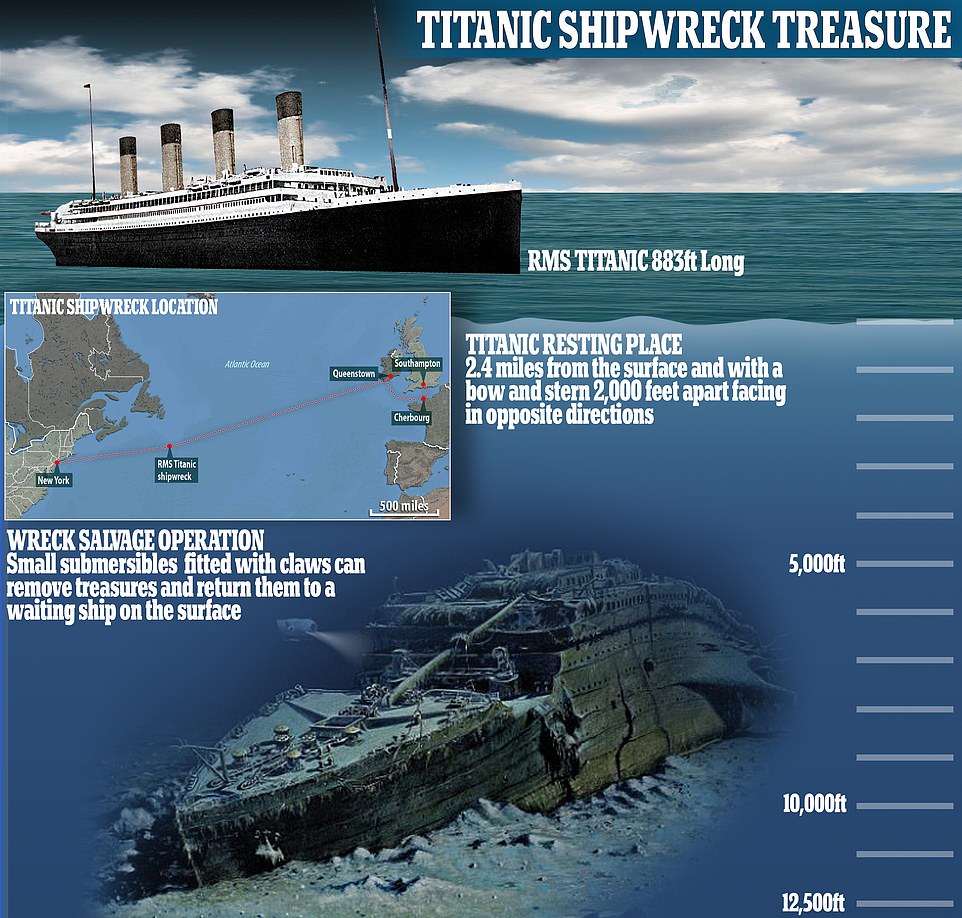